Racers Edge Performance back in action at FX-ASC opener 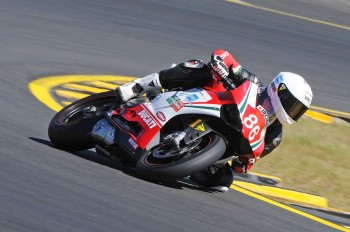 Racers Edge Performance North Coast V Twins Craig McMartin Racing rider Beau Beaton had a busy weekend at the 2015 Swann Insurance Australasian Superbike Championship’s opening round competing in both the Superbike and Pro-Twins classes at a fine and sunny Sydney Motorsport Park over the weekend of 27-29 March.

With little track time since the close of the 2014 season, back to back sessions on both bikes over the weekend would test Beau’s endurance along with adapting from the thundering KH Equipment Irving Vincent to the scalpel like Racers Edge Ducati Panigale 1199.

In the Superbike class Beaton and crew worked on just getting comfortable on the bike after the extended period off the machine along with a new specification of control tyre for the superbike class for this round.

Suspension guru Steve “Muddy” Mudford and Technical Manager Mark “Doc” Downie were hard at work with Craig McMartin and Team Manager Greg Maher to adapt the motorcycles from the rider’s feedback after the practice outings on Friday.

In the Superbike class Beau Beaton managed to improve his lap time over the day by a fraction under three seconds from first practice to the qualifying session for Saturdays AFX-SBK Championship, securing a second row grid position in the highly competitive field.

In the Pro-Twins class it was a case of testing under race conditions with a new highly updated version of the bespoke 1600cc four valve Irving Vincent lovingly hand crafted by Ken and Barry Horner.

Still very early in the development stages of this new machine Beau, who has much experience on the 1300cc Period 5 version of the Vincent, was tasked with providing feedback to allow Steve Mudford to further adapt the settings of the high specification suspension components and chassis geometry along with assisting Ken and Barry to fine-tune the fuel injection set-up of the thundering beast.

Beau managed to meet his expectations on the Friday dipping into the 1:34 second bracket in qualifying, then improving another .2 of a second in Saturdays race one before concentrating his efforts on the Superbike for the remainder of the day.

Saturday was a perfect day for racing weather wise and Beau got the day started well with strong performance in race one. Not getting the jump off the line he would have liked Beau worked hard early in the race to claw his way back to eighth place after six laps. Setting his best lap of the weekend to date on lap two, an impressive 1:32.1, Beau battled hard with arch rival Linden Magee for a majority of the race before his lack of recent track time saw the times drop away fractionally at the end of the race. Still, a ninth place finish for the first race of the season in such a competitive field was a strong result.

Saturdays race two was another brilliant start to the 2015 season with another large group battling for the lead in the early stages, just like in race one. Completing the first lap in eighth place Beau was in the thick of the action as the large pack battled for position on track. Beau and the Racers Edge North Coast V-Twins Panigale fought hard, and although unable to match his lap time from the first race on the worn tyres, showed the 1199 Panigale is still able to challenge the four cylinder superbikes with a top speed only 4 KPH down on the fastest speed set during the race.

An overall result of ninth for the Saturday round would see Beau start from row three for both of Sundays televised Swann Series Superbike Races.

Beau’s first outing on Sunday was the first Pro-Twins race on the Irving Vincent directly followed by Superbike race one.

The fifteen lap Superbike race got off to a cracking start with Beau holding seventh position for the first four laps with a series of laps in the 1:31’s and his fastest lap of the weekend, a 1:31.6. The remainder of the race was a series of battles for position with Beau holding on for a tenth place finish, a commendable effort after 22 racing laps in back to back races.

In the three Pro-Twins races on Sunday Beau and the KH Equipment Irving Vincent completely dominated the Pro-Twins Formula One class with three unchallenged victories over extremely capable modern V-Twin and V-Four Superbikes. Beau’s fastest lap of the weekend came in race one with a stunning 1:34.1.
After over 100 laps in his first outing on a road race bike in four months Beau was suffering from fatigue as he headed out for the final Superbike race for the weekend on the Racers Edge Performance North Coast V-Twin Craig McMartin Racing 1199 Panigale. A strong opening few laps then saw Beau run off at turn two on lap three losing some 16 seconds. Beau set off in chase of the pack again but another few mistakes was enough warning that it would be best to pull in and not risk injury to bike or rider.

Racers Edge Performance Team now looks forward to preparation and planning for round two of the 2015 Swann Series Championship at Mallala in May where they hope to be able to debut the new 1299 Panigale.

“Tough weekend, but in all honesty I exceed my expectations” explained Beau Beaton. “I haven’t been on the bike for over four months and that really showed in the last few laps of the superbike races. I have been doing a lot of cardio training and my fitness wasn’t a problem, but the use of muscles that hadn’t been used for a while was really noticeable in the latter stages of the superbike races when the tyres started to move around. In the early stages I could go with the leaders, which is a good sign. To do a PB on the Superbike in race one on Sunday was also pleasing and hopefully at the next round we will have our 1299 ready and that should give us another little lift. Doing double duty was tough but the opportunity to work with Ken, Barry and “Muddy” in the development of this new bike is a real honour. The bike has so much more potential we are really only scratching the surface of what it is capable of. It was great to win the Pro-Twins class but we want nothing less that outright wins, and that bike is definitely capable of it. The Vincent is a pleasure to ride and it has so much torque it could literally pull the bend out a river. Thanks to all the team for their hard work over the weekend. Without the support of Greg & Julie from Racers Edge, Craig McMartin, North Coast V-Twins and Kevin Henke from Quick Lap Performance I simply would not be out there on the grid this year.

Team Manager Greg Maher was glad to be back racing after the off season ”We got caught out a bit on the weekend with a lack of testing and preparation for this first round. The back to back races for the two classes hurt us, especially seeing as Beau hadn’t ridden since the end of last year and was suffering from a lack of match fitness, which is to be expected at the first round. We did learn a few things over the weekend though in relation to the set-up of the Panigale which we can try at the next round at Mallala to improve tyre longevity, and Beau has a bit of riding planned between now and then so we’ll be sure to hit the ground running for round two. As always a big thanks to the guys in the team for all their hard work over the weekend, to Craig for sourcing the bikes, Steve and Doc for their hard work and as always the support of North Coast V-Twins along with our long time partners Link International, Motul, RK Chains and Quick Lap Performance.