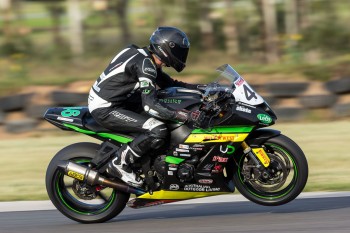 Pirelli privateer rider Mike Jones (Australian Outdoor Living Cube Racing) has achieved a dominant performance on his Pirelli shod Kawasaki at the most recent round of the Australian Superbike Championship, taking the Pirelli Superpole and both race wins to lead the Superbike class at the end of round 2 of the series.

Choosing Pirelli Diablo Superbike SC2 front and SC0 on the rear, Jones set a Superpole time of 1:15.368, which is a new best lap for Superbike class at Morgan Park Raceway. This impressive result was achieved on standard Diablo Superbike tyres which are available to all riders around Australia.

Mike also took both race wins on Sunday by a comfortable margin on his Australian Outdoor Living Cube Racing Team Kawasaki ZX10R. Most impressive was the consistently of his lap times, showing the high level of performance available over the full 14 laps when using Diablo Superbike tyres.

New Zealand rider Ryan Hampton rounded out the overall podium in 3rd place, also choosing Diablo Superbike for his first attempt at the Morgan Park circuit on the Next Gen Motorsports BMW.

Mike Jones – “Pirelli offer magnificent support to myself and the Australian Outdoor Living Cube Racing Team. We are really happy to have that support because it is such a great product. The Pirelli tyre is a very high performance product and they are the best tyre to be on”.

In the Production class, Pirelli Diablo Rosso II HR showed it is the tyre to be on in this hotly contested development class. For this round WA rider Michelle Marais (SP Racing) took her Ninja 300 to the round win ahead of Justin Hall and Lilish Ross, who also chose to run on Pirelli tyres.

For all tyre orders and technical enquiries for ASBK Round 3, contact GP Wholesale on 08-9244 4440 or email [email protected]

Pirelli Motorcycle tyres are Imported and Distributed Exclusively in Australia by Link International.