Brayden Elliott has continued his impressive launch into the 2015 racing season. 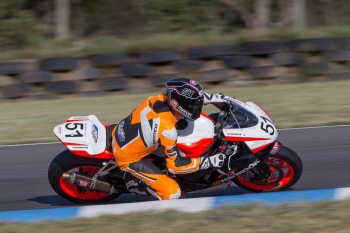 Brayden Elliott has continued his impressive launch into the 2015 racing season by taking a clean sweep of wins in the Supersport category at round two of the 2015 Australian Superbike Championship (ASBK) at Warwick’s Morgan Park Raceway in Queensland.

Elliott also took a convincing pole position, setting up an impressive run of form on the back of his Australasian Supersport Championship round win at Sydney Motorsport Park just two weeks ago.

As he continued his expanded season of racing at the second round of the ASBK at Morgan Park, Brayden managed the third fastest time from the combined three practice sessions on Friday. Working intently with his team ahead of Saturday’s two 30 minute qualifying sessions, Elliott managed to secure the fastest time for Supersport in the first session with a 1:17.351 on the third of just three laps. The time would remain the fastest after qualifying two with Brayden placing second in the final hit out ahead of Sunday’s races.

After setting the fastest time in the morning’s warm up session on Sunday, Brayden rode out to a 1.7 second lead in the first nine laps of race one, also achieving his fastest lap of the weekend to date with a 1:16.953 before a red flag stoppage with it to be conducted in two parts. Four further laps were completed with Elliott expanding his lead to three seconds by the completion of the race, taking the race win.

Starting again from pole position in the second and final race of the weekend, Brayden engaged in a close battle with Queenslander Troy Guenther for the lead of the race before going on to take the race and round win and the fastest lap of the race with a 1:17.133. The weekend’s results have helped to see the Tumut rider rise to the top of the Championship standings by two points.

Brayden Elliott: “We began our weekend with some good pace in practice. I had definitely benefited from our pre-event testing at Morgan Park as it was a circuit I had not competed on prior to that test. Our qualifying session was a standout, setting the quickest time and being able to maintain it through to qualifying two which was a real confidence boost as it became my first ever outright pole position in road racing.

“I was feeling very confident going into race one after our successes on Saturday and I opened up a comfortable lead before the red flag stoppage. Luckily we were able to maintain our gap and pull away further in the restart to take a convincing win. The battle with Troy (Guenther) in race two certainly provided a challenge but I was very happy to be able to take the win not only in the race but also for the round.

“To be now leading the Australian Supersport Championship is a huge thing for not only myself but my family and all of my sponsors and supporters. I have to extend a special thank you to Phil Tainton and Shawn Giles, their support has been incredible, it’s been a lot of hard work and effort to get us to this stage but we are certainly heading in the right direction and I can’t wait to hit the track again at Mallala in May for the next round of the Australasian Superbike Championship.”

Brayden’s next event is round two of the 2015 Swann Insurance Australasian Superbike Championship which takes place at Mallala Motorsport Park, South Australia from 15-17 May.