EBR Australia takes top three with Hern on board 1190RX. 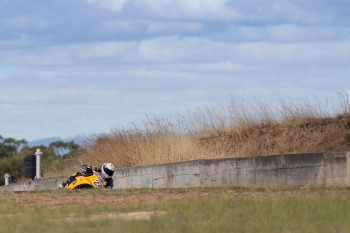 On the back of a successful 2014 racing debut, EBR Australia entered the 2015 ASBK championship with rider Chas Hern and the EBR 1190RX.

Round One: The first round at Phillip Island proved once again the EBR was more than competitive and with hard work in development between free practice and race one, Chas set a PB of 1.36, a clear two seconds a lap faster than in Qualify.

Qualify unfortunately had Chas start 17th on grid and whilst the EBR showed immense pace, it had meant time was spent battling in the midfield to eventually claim 10th place finish in race one and 13th in race two, this time due to a minor setup issue.

Taking away many positives from the weekend, EBR Australia left Phillip Island sitting 11th in the championship.

Round Two: Round two at Morgan Park Queensland was new for ASBK and also new for many of the riders including Chas. The small undulating and at sometimes bumpy track proved a hit with riders, along with the great Queensland weather and biggest crowds seen so far in ASBK.

The competition was fierce with the likes of the new factory backed R1 taking to track, yet Friday’s free practice started to show the strengths of EBR hitting 1:17.8 making it third fastest.

Saturday’s Qualify showed more consistent performance from the 1190RX and Chas ensured he got the best out of the EBR crossing the line third fastest and putting himself on the front row for the race.

Race day brought out the sunny Queensland weather and unexpected local wildlife which red flagged the first race after a good start from the grid. Chas was undeterred and for the restart managed to jump the field taking first position into turn one.

Leading for a lap, the pack caught up putting Chas back in third at the end of the straight where he then held position until the finish line, extending a 5 second gap behind to fourth.

For the delighted fans of EBR, there was more action to come in race two where Chas again starting third from provisional grid, battled to keep his position until lap 6, whilst pushing hard low-sided in the hairpin of turn 6. Chas brushed off the racing incident and quickly got back on the bike to catch up the rest of the field from 13th position to 8th.

The remarkable fight back through field and the earlier race one podium means EBR scored valuable points for the weekend. EBR Australia now lies fourth in the ASBK Championship and shy of 9 points from the lead.

Chas Hern remains positive there is more to come from EBR and anticipates that with further preparation and development more podiums can be achieved.