Talented all-rounder sounds off on a variety of topics.

Team Honda Racing’s Troy Herfoss has been the class of Australian road racing to date in 2015, winning the World Superbike support races at Phillip Island and then going on to win Sydney’s opening round of the Australasian Superbike Championship. Heading into Mallala this weekend, we tracked Troy down for an update on all sorts of subjects via this Fast Thoughts interview. 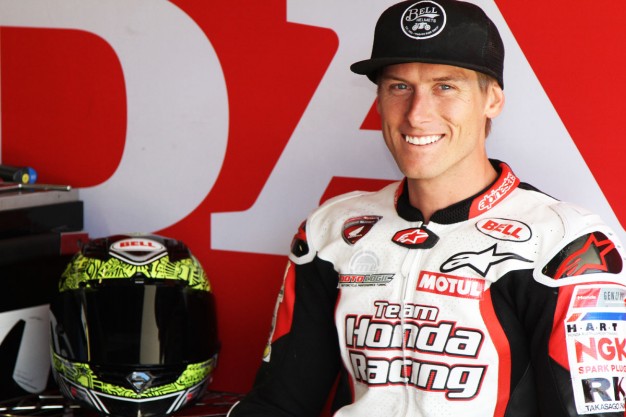 It was a good experienced. I went to ride with the Sakurai Honda team at Suzuki and it was an eye-opener – the series is very open in terms of the bikes and tyres. You’re competing against factory bikes on factory tyres, so it was pretty hard to compete. Our focus was to make the bike as easy as possible to ride for the 8 Hour, so it was a bit frustrating sometimes, because Hooky was up front and I know I can be as well, I think. As a race it was a bit frustrating, but we did make progress in preparing for the 8 Hour. It was a 45-minute race and I made a good start, went with the top 10, but the tyre we were riding on and where the bike is at, it was impossible to keep going. My lap times dropped away a hell of a lot over the race, whereas the factory guys kept knuckling down and pushing out the times throughout the race. I definitely could have rode inside the top 10 on the right tyres, but anyway, that’s the way it is. Now we’re looking for a teammate for the 8 Hour and what we’ll do there – that’s the main focus for that team.

The Blayney to Bathurst was the first longer distance race I competed in when I started riding in 2009. The Goulburn club just enjoys going away and doing that race each year, so this year I made it a bit of a focus of mine. Cru [Halliday] and I have a bit of a joke about our cycling, there was a bit of friendly banter going on last year about how him and his mate were going to keep kicking my butt and my mates’, but we sort of enjoy it and had a good weekend actually. I raced the criterium on the Saturday against Cru and then after a few beers with him that night, unfortunately he forgot his shoes [laughs] and didn’t get to race the next day! So I was the only motorbike rider left in there and that took a bit of pressure off. It was just one of them things; I felt good and tried my luck with a couple of kilometres to go and got the win. It was pretty big for me, because there was a few really strong riders there and it was good to see my training pay off.

It’s one of the most fun events we do all year and this year was equally as fun. Every year I want to win it more and more! The first year I finished second and thought I was probably good enough to win, but wasn’t quite good enough in the final. And it was the same in the second year – I was definitely fast enough, just too slow at the start of the race. This year I was 100 percent going fast enough to win it, but made a silly mistake and crashed out. As an event, it’s unbelievable for the sport and it brings so many top racers together. To have three of Americas top flat track riders come out and show us how they do it, plus obviously Bayliss himself puts in a big effort on and off the track, so we all enjoy it and it brings our profile up. It’s just a good way to kick off the season with some hard racing. 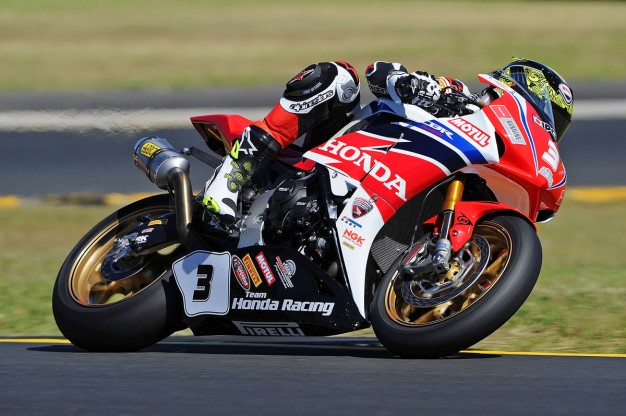 Mallala’s this weekend and it’s exciting at the moment, because I feel like I’m riding the bike well and the team’s working well. We’re really motivated as a team, so it’s a great team to be a part of at the moment and we really want to keep the Honda on top. During the test last week the conditions weren’t ideal, but I felt like I was riding well and went faster than last year. This will be an important round because at the moment Wayne [Maxwell] is my main rival and we all know it’s his favourite track, so it’s important to compete with him there and that will set us up for a good year, hopefully.

I don’t really like it that we have to use them, where we finished in the championship the year before. We all like to use the one number really. I do believe in using the number one plate and I will if I ever get one, but as far as building your own profile it’s good to base it around your number and it makes you easier to follow over the years. I do see what Terry [O’Neill] is trying to do and for the TV that it makes it simple to see who finished where the year before, but also if you are building the series around riders then fans over the years get to know their numbers, so the current system can be confusing in that way. There are positives and negatives, but from a personal point I’d prefer to stick with 17.