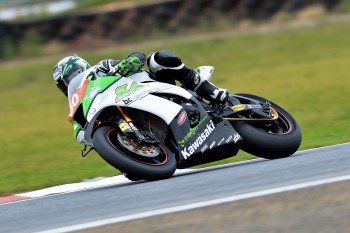 SA Kawasaki BCperformance superbike riders Ben Burke and Evan Byles pushed hard over the weekend on their ZX-10Rs’. Ben was able to collect enough points to put him into 11th overall for the round after a solid performance in the first two races and an unfortunately crash in race three. Ben lost the front end at turn three due to another rider making contact, bringing his weekend to an unfortunate close. “I was very pleased with my weekend’s racing. We were able to bridge the gap to the leading group and the developments the team made between rounds one and two have made the whole package much better. I’m now looking forward to round three with some more developments coming to help run with the leaders more consistently”, said Ben.

Evan Byles was able to improve on his overall placing from the first round as he claimed 10th place. Even said, “I had a very enjoyable weekend at Mallala. Kelvin (team Manager) and Kirsty (Mechanic) worked together to improve the set-up of my Ninja ZX-10R throughout the weekend and I improve my performance on this track to a new personal best time of 1:10”.

Other Kawasaki supported riders included Sean Condon and Matt Walters who held their ground in the Superbike class.

Sean Condon dismissed the pain he was suffering from injuries he sustained in the first round of the Australian Superbike Championships to claim his best race result of 3rd place in race one and an overall 6th position for the day. “I pushed my way up in the first race and I was really comfortable and confident but then I struggled with fatigue in my arm due to injuries. Overall I got good points and I’m looking forward to the next round at my home track, Sydney Motorsport Park”.

Matt Walters came away unscathed in 8th place overall for the day. “It’s a very heavy braking track, a technical track and you just need to get your lines right. It was a fairly decent round. It wasn’t the best result but we have improved since the last round. We have moved forward with the bike after this round and we should see some great results come our way soon”, Said Matt Walters who will be testing his ZX-10R at Sydney Motorsport Park over the next couple of weeks before the next round of the Australasian Superbike Championship.

The Supersport class brought some mixed results for Kawasaki supported riders, with Kyle Buckley of team SA Kawasaki BC Performance finishing strongly in race one to place 5th but unfortunately having a collision with another rider in race two which ended his race. Kyle was ok but the bike suffered relatively significant damage. The efficient team mechanics worked quickly to rebuild the bike for the next race and Kyle managed to claim 9th place. Kyle summed up his day saying “I had an up and down day today, I was able to run a good first race. A front-end loss in race two left me with a DNF and a bike that was only just able to be repaired for race three. Phenomenal job by the team to get the bike going for the last race”.

Team member Paul Young unfortunately crashed his ZX-6R the day prior in the FX Superbike Championship. Despite this, he managing to compete in the Australasian Superbike championship on Sunday where he kept up with the leading pack in all three races, finishing 7th, 4th and 6th in races 1, 2 and 3 respectively to provide entertaining viewing.

By the end of the round, Kawasaki supported Jack Baker managed to learn the Mallala track on his ZX-6R and finish the day in the middle of the field in 12th place overall. “In free practice we played with the suspension and went backwards but we managed to play around a bit more and got it right for race 1. I’m happy with the result and still getting used to the ZX-6R” Said Jack who had previously raced competitively on a Ninja 300.

The determined 16 year old is eager to improve on his racing results as he juggles his study commitments with his passion of road racing. “I just finished some exams before I flew down for this round and I have assignments to go back to on Monday, but I love racing and I make time to fit it in”.

The next round of the Australasian Superbike Championship will be held at Sydney Motorsport Park on June 26th 2015.