What's changed since round one of the Australasian Superbikes?

Sydney Motorsport Park will host no less than three rounds of the 2015 Swann Insurance Australasian Superbike Championship, including round three of the season this weekend. It’s been a long time between drinks for the series, however plenty has changed since the series was in Sydney for round one in March. We dissect a few of the more apparent storylines.

A: Herfoss traded wins with guest teammate Aiden Wagner at Sydney’s opener, but Wagner’s since moved on to Europe in a bid to race the world championships. On paper Herfoss has to be the favourite, but with the Yamaha’s gaining momentum and experienced Honda teammate Jamie Stauffer back in the mix, this round could be anyone’s.

Q: Just how much better is the new Yamaha since round one?

A: Victory for Wayne Maxwell at Mallala’s second round proved the R1 as a winner against the Hondas, however that track is known to be one of the defending champion’s best. The bike is definitely refined within the FX-ASC ruleset, so we can forecast an improved showing in comparison to round one. Good enough to beat the Hondas at SMP? That’ll be a big achievement.

Q: Is Wayne Maxwell the strongest of the YRT with YMI trio?

A: He was best of the R1s at round one and won overall at round two, but it’s shaping up to be pretty close between Maxwell, Glenn Allerton and Cru Halliday all year long. Right now though it’s got to be Maxwell who’s regarded as Yamaha’s strongest force, placed second in the standings. 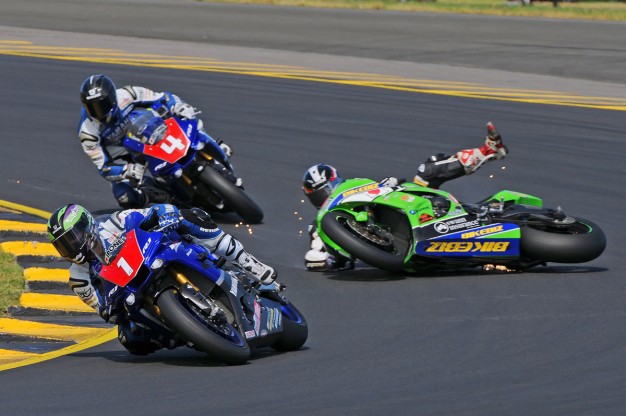 Q: Will it take Jamie Stauffer long to get up to speed considering he missed round one?

A: The Team Honda Racing veteran has done countless laps of the Eastern Creek circuit and will be straight on the pace from Friday. He was solid at Mallala, so with over a month’s worth of further time to prepare he could very well win on Sunday when it counts.

Q: Does Mike Jones have what it takes to win more races?

A: After winning multiple races at last year’s Sydney final we expected Jones to be stronger than he was at round one. He was improved at Mallala and did win a race on Saturday, so don’t be surprised to see him in contention at some stage over the weekend.

Q: Who else can we expect to see up front?

A: Sydney has a lot of strong riders when it comes to their home round, the likes of Sean Condon, Beau Beaton – equipped with the 1299 Panigale – and Matthew Walters all shining at SMP over the years. In terms of the factory runners, this has to be Halliday’s strongest circuit on the schedule.