Who's on target for the 2015 championship to date?

With the 2015 MotoGP World Championship season reaching its halfway mark this weekend at Sachsenring, CycleOnline.com.au rates the title chances of the top five riders in the standings so far. On paper it looks like we will witness an all-Yamaha battle for the crown, however this is motorsport and, as they say, anything can and probably will happen. 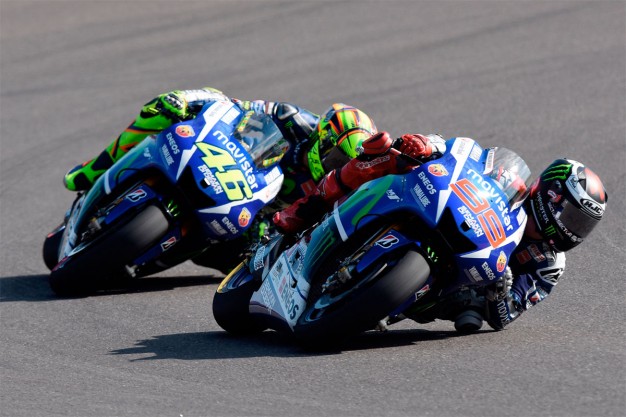 Rider: Valentino Rossi
Team: Movistar Yamaha
Rating: 8/10
Rundown: The Doctor currently enjoys a 10-point lead in the standings following a third win of the season at Assen and he’s yet to finish off the podium throughout the first eight rounds. If he can keep up that type of form then we will see Rossi claim a magical 10th world championship, however the challenge of Lorenzo, Marquez and those powerful Ducatis will provide plenty of hurdles to jump along the way.

Rider: Jorge Lorenzo
Team: Movistar Yamaha
Rating: 7/10
Rundown: Judging by his four-consecutive wins from Jerez through Catalunya it was looking like Lorenzo would quickly surpass Rossi in the standings and run away with this thing. However Assen showed that not any one rider will dominate this season, despite his untouchable form during that winning streak. If he can stay in podium positions and continue winning races consistently then a third premier world championship could very well be his.

Rider: Andrea Iannone
Team: Ducati Team
Rating: 4/10
Rundown: With two podiums to his credit and top six finishes in every race so far, this mad Italian – Crazy Joe – has shown great form on board the GP15 despite a shoulder injury sustained during testing at Mugello in May. We doubt he will be ready to challenge for the title this year or maintain his position inside the top three for that matter, but there’s no doubt he is a mainstay at the front of MotoGP now he’s in a factory team. 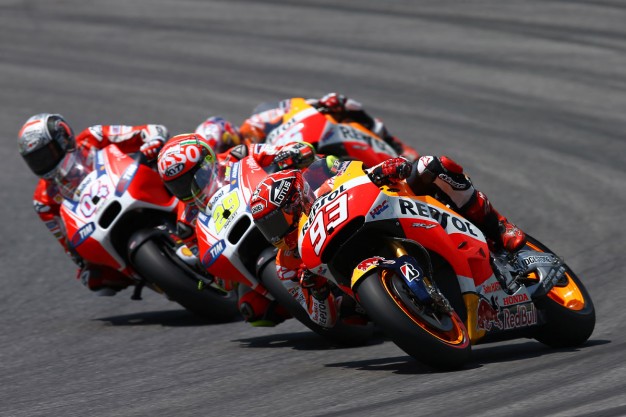 Rider: Marc Marquez
Team: Repsol Honda
Rating: 6/10
Rundown: The reigning dual world champion has had a horrible title defence so far with just two podiums and the one race win at Austin, Texas, currently 74 points behind Rossi. If anybody can close that deficit, it’d have to be Marquez, although he would need to find comfort in the current RC213V and have the Yamahas experience trouble if he plans on closing the gap. We’re at least willing to place him ahead of the Ducatis in third.

Rider: Andrea Dovizioso
Team: Ducati Team
Rating: 4/10
Rundown: After taking four podiums in the first five races, the past three have been trying for Dovizioso (DNFs at Mugello and Catalunya, then a 12th place due to a broken seat at Assen). He’s obviously got loads of potential on the GP15, but if you want to win at the highest level you need unrivalled consistency across the course of the season. We won’t be surprised to see him overtake Iannone by season’s end, but the title’s a long shot.