Cube Racing rider crowned with one round to spare in the championship. 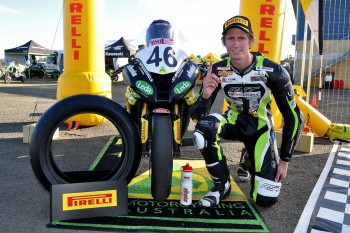 Mike qualified fastest on the Saturday after leading the items also in Friday practice. He set a Pirelli Superpole time of 53.9 on the Saturday using 120/70R-17 Diablo Superbike SC2 front and 200/60R-17 SC0 rear on his Kawasaki ZX10R, ahead of Daniel Falzon and fellow Pirelli rider Ryan Hampton (Next Gen BMW HP4) in 3rd. This tyre combination has been the benchmark for racing in the Australian Superbike Championship so far this year, and proved very versatile even in the colder conditions that were presented to riders on the Sunday race day.

Come race day Sunday a local crowd of over 4,000 greeted these cool conditions to witness some great racing in all classes. Cube Racings Mike Jones however was in class of his own in Superbike, showing the performance of the Diablo Superbike tyre range that is available to all riders around Australia when they chose Pirelli. He took both race wins and the Superbike Championship crown , plus the round win ahead of Ryan Hampton in 2nd with Cube Team Owner and fellow racer Ben Henry in 3rd, providing a Pirelli clean sweep of the Superbike podium in Tasmania.

Mike Jones – “I am very happy to win the 2015 Australian Superbike Championship, and I couldn’t have done it without the performance and support of Pirelli and Link International. The Pirelli’s let me set the pace for the weekend and gave me the grip for race distance every time. I thank Pirelli for building an awesome product that helped me win the championship, and Link for their support with Pirelli, Motul, Arrow Exhausts and RK Chains.

Ben Henry – Team Owner, Cube Racing – “I’m really happy with Mikes win this weekend and also with him winning the Australian Superbike Championship this year with Cube Racing. We are a small privateer team that has worked with Pirelli over many years, so to take the championship win with them is pretty special and proves the performance of Pirelli tyres. I’m very grateful for the support Link International has been able to provide us, with a range of products that let us go racing at the Australian Superbike Championship and achieve this success at the highest level. We look forward to the final round of the championship at Phillip Island in October.”

In the Supersport Class Pirelli also tasted success, with most of the field choosing Pirelli Diablo Supercorsa SC1 front 120/70ZR-17 and SC1 rear 180/60ZR-17, Kane Burns lead the charge for Pirelli by taking a race win and also 2nd overall for the round ahead of fellow Pirelli rider Aiden Coote in 3rd.

In the 300cc Production class, Diablo Rosso II 110/70R-17 H and 140/70R-17 H remains the choice for the fastest riders. This weekend in Tasmania saw the fastest qualifying going to Riki Lanyon, and the overall podium a Pirelli clean sweep with Justin Hall 1st, Riki Lanyon 2nd and Drew Sells 3rd overall for the weekend.

Don Nicholas, Product Manager Pirelli Moto at Link International – “We congratulate Mike Jones and Cube Racing on the 2015 Australian Superbike Championship win. Ben Henry and his team have worked with us over many years so to claim this Championship for Pirelli and Cube Racing with Mike Jones is very satisfying. Cube Racing is a small, tight nit private team and it shows what can be achieved with passion, loyalty and team work and Pirelli Diablo Superbike tyres. We thank them and all of the Pirelli riders for choosing to race with Pirelli in the Motorcycling Australia organised Yamaha Finance Australian Superbike Championship, and look forward to final round at the famous Phillip Island Circuit in October.”

The Australian Superbike Championship final round is at Phillip Island on 4 October. Tyres for the final round can be purchased from Cykel Products using the Tyre order from available on the Link International website www.linkint.com.au.

Pirelli Motorcycle tyres are imported and distributed by Link International.