Kawasaki on the Podium at Round five of the ASC 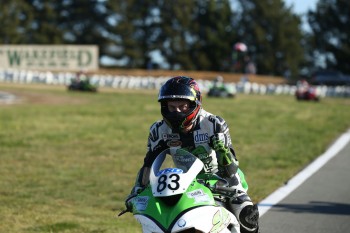 Kawasaki supported Kyle Buckley won his first ever Supersport race aboard his Ninja ZX-6R while Matt Walters achieves series best on his Ninja ZX-10R in the third Superbike race at round 5 of the ASC.

Kyle Buckley of team SA Kawasaki BCperformance broke through to win his first Supersport race of his inaugural season competing in the 600cc class. After a 5th place finish in both the first and second races, Kyle glided across the finish line in first place aboard his Ninja ZX-6R to wrap up round 5 of the ASC in 4th place overall.

“In the first race I had a really good start and managed to run with the front guys but I didn’t quite hang on to them and finished 5th. In the second race my left boot came undone, the zipper broke and I couldn’t change down gears and so I suffered in that one. Before the last race, the team stiffened up the rear suspension and took a bit of ride height out of the bike and it worked a treat,” said the 20 year old.

“It’s good to know that we can set the bike up right and run with the front guys so hopefully we get some good testing done at Winton for the next round and we do well down there,” Kyle commented.

Kawasaki supported, Matt Walters, also achieved a series best placing at Wakefied Park Raceway over the weekend. In the final Superbike race, Matt managed to cross the line in a respectable 2nd aboard his ZX-10R after placing 6th in both of the first two races.

“The first two races were a little difficult, we didn’t get good starts and it was hard to recover so I just had to continue on but it wasn’t too bad. We came through in the third race. I got a good start and found a little bit more pace once I got into second place. I got close in the end but didn’t have enough left in the tyres to take the race so I held it for second.

We came here last week and did a lot of testing which really paid off. We should be able to keep these results coming now. We’ve got a fair bit of confidence behind us, the bike is working great and dad (Carl Walters) has everything prepared well so couldn’t ask for a better team and we are starting to see the hard earnt results,” said Matt who rounded off the day in 5th place overall.

Kawasaki rider, Rick Olsen was hoping to replicate his positive results in the last two rounds however a fall in the second Supersport race aboard his Kawasaki Connection Ninja ZX-6R prevented him from realising his winning potential.

“We went quite well in the first race, I got a half decent start and I made my way up to second and caught the leader only to end up finishing third. We made some changes to the rear suspension for more grip and it seemed to be working really well for the second race until I had a big front lock-up and lost the front.

Kawasaki Connection and worked like clockwork to put the bike back together for the last race until we noticed a crack in the frame from the crash so I had to sit it out”, said Rick who is still in the hunt for the Supersport title with 6 races left in the series.

Kawasaki supported, Sean Condon was brave to race in the Superbike class on his Bikebiz ZX-10R after he dislocated his left shoulder in a fall while racing the day before. “It hurts a bit but I’m here and as long as I can sit on the bike, there is still a chance to win so I’m going for it,” said Sean who pushed through his pain threshold to finish the day in 11th place overall.

Kawasaki supported riders are looking forward to the next round of the Swan Insurances Australasian Superbike Championship being held at Winton Raceway on 23rd October.

Find out more information on Kawasaki merchandise by following this link –http://kawasaki.com.au/accessories-live-search.