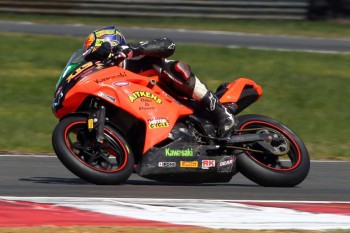 In only his 2nd season of racing, and limited track time, young 18 year old, Ryan Masri displayed his skill, maturity and professionalism on and off the track in round 6 of the Ninja 300 cup Australasian Superbike championship at Wakefield Park, Goulburn. Ryan qualified on the front row in 3rd position for the first race on Sunday.

Race 1:
Ryan got a fair start and was in 2nd place into turn 2 to Jason Martin, then passed Jason on the last corner coming on to the straight and was leading over the line to start lap 2. A grader, Paul Young, made his way through the field, caught and then passed Ryan on Lap 3. Ryan used his head and sat behind the more experienced rider, and both riders started pulling away from the rest of the field. Ryan made a couple attempts to pass Paul, but could not do it safely and settled for 2nd place. Ryan also got the fastest lap of the race.

Race 2:
Paul Young got a good start and led the field into turn 1, with Ryan and Robbie Menzies slotting in behind him. Robbie and Ryan were having a great battle swapping positions many times for 2nd place throughout most of the race, while Paul Young pulled a bit of a gap on the 2 young riders. Ryan finally won the battle with Robbie and got 2nd place to Paul Young, with Robbie a close 3rd.

Race 3:
Ryan got a bad start and on the first lap was back in 5th position at one stage battling with Ben White, Robbie Menzies and Jack Dawes for 2nd position. The 4 riders were swapping positions most of the race with some very close passing moves, elbows rubbing, etc, which made for some very exciting racing. With 2 laps to go, Ben White, Robbie Menzies and Ryan pulled a gap on Jack Dawes, and were then in a 3 way battle for 2nd place. On the last lap, the 3 riders were very close and then coming into the last corner of the last lap all 3 riders were 3 abreast, with bikes sideways and wheels locking up, then a 3 way battle down the straight, with Robbie Menzies getting the better of Ben and Ryan over the line for 2nd place from Ben White in 3rd with Ryan in 4th by 0.055 seconds.

The weekend was Ryan’s best result to date, with 2nd overall for the day and 1st in the under 20’s. Ryan now sits in 2nd place overall in the championship with 241 points, and only 27 points behind Paul Yong in 1st. Ryan also has now moved into 1st place in the Under 20’s championship with 330 points, in front Jack Dawes by 19 points.

Also after the last race Ryan’s bike was tested on the Dyno, and only had 36.02hp, over 2hp less than most of the bikes that were tested. Ryan would like to thank his dad, Paul Aitken (Aitkens Bike and Power), Xpress Transport, and IPONE Oils for all their help and support.