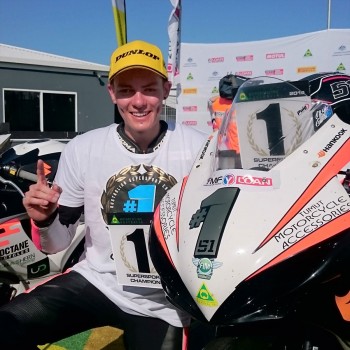 Suzuki riders have once again shown the dominance of the Suzuki GSX-R 600 in Australian racing, dominating the final round of the 2015 Australian Superbike Championship at Phillip Island over the weekend.

In a fantastic final day of racing for 2015, Brayden Elliot locked down the 2015 Australian Supersport Championship ahead of fellow Suzuki rider Kane Burns, while Veteran Victorian racer Chas Hern put his Suzuki on the top step of the podium at the season finale to cap off a sensational season for GSX-R pilots.

Championship points leader heading into the final round Elliot started the opening race from pole position and quickly created a good sized gap over the field on the way into turn one. However Hern in his only performance of this years ASBK series quickly closed in on Elliot, with the two riders locking into a race long battle that would see them each spend time at the front of the field.

With two laps to go, Hern made a final decisive move into the lead and laid down two perfect laps to cross the line for the race win ahead of Elliot, with Burns who started 13th on the grid, finishing third to give Suzuki a clean sweep of the podium in race one.

Race two started in identical fashion as the opener with Elliott again taking the early race lead before Aaiden Coote took over proceedings at the front. Once again it was Hern who would provide the big story of the day, working his way into second position, passing Elliot before quickly moving into the lead.

After another tight battle it was Hern who proved he was the fastest and most consistent Supersport rider on the Island, picking up his second win of the day on his way to the round win.

While Hern was the man of the day, the year belonged to Elliot who crossed the finish line in comfortable third position, one position ahead of his nearest rival Kane Burns to seal the 2015 Australian Supersport title by 24 points over his Suzuki counterpart.

“It probably hasn’t really sunk it yet but it feels amazing, Elliot commented. “To get off the bike and be able to celebrate with my family and everyone that has helped me out, it’s a pretty amazing feeling not only for me but for them too. “I really owed this to them, especially my family, so it feels great and I’m glad that we can finally wrap it up for the year.

“I didn’t feel pressure as the team were really good to keep it as low pressure as what we could make it. I probably had a lot more nerves than I normally have and normally I am the sort of rider that if I can get to the front I like to try and pull away. “I had to put myself in a different situation just to hang back and not do anything silly, so it was a little bit funny out there but I was counting the laps and looking forward to crossing the finish line and seeing that chequered flag.”

Kane Burns was happy with his second position in the championship standings after a tight season of racing against Elliot.

“I am pretty happy with that, it is nearly a dream come true, but really it is great,” Burns said. “I have learnt a lot this year – it has been a great series and a pleasure riding with Brayden and everyone else. “Starting from 13th on the grid there was always a lot of pressure, but at the end of the day it was a long stretch to win the championship. “I would have been a lot more of a hope if I was on the front row, but I feel like I have done pretty well and we will see what happens next year.” Burns concluded.