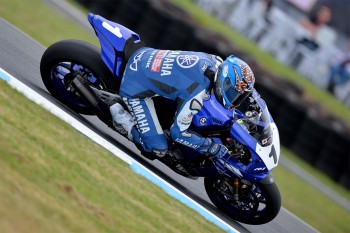 The Yamaha Racing team made the most of their one off appearance at the Australian Moto GP contesting the Superbike class with Glenn Allerton and Wayne Maxwell leading a spirited fight at the high profile event on their Yamaha R1’s.

The team contested three, eight lap races over the Moto GP weekend where each and every race was an intense affair with the lead bunch of riders separated by less than a second in all races.

Glenn Allerton continues his late season surge and raced to second place across the weekend, highlighted by a race win on Saturday. Allerton was involved in a five rider war in race one that saw the lead change several times before having to settle for second. A battle of the YRT team mates in leg two bought the crowd to the fences with Allerton getting the win over Wayne Maxwell by a few hundredths of a second before he lost grip during the final leg and ran wide allowing several riders to sneak past and taking fifth place.

His 2-1-5 scores totaled 61 points and equal first on the day with Mike Jones but second on a count back due to Jones having the better final race score.

“I’m a little disappointed the way things ended up as I felt I rode well enough to win but that’s the way things go sometimes. Every race was a battle and it was good that the Australian Superbike class was able to put on some great racing in front of a big crowd,” Allerton said.

“The team again did a great job and we have gained some momentum over the last few even we have done. We again made progress this weekend and I can’t thank the team for all the effort they put in,” Allerton ends.

Wayne Maxwell ended the weekend in fourth place with 4-2-2 in a very consistent weekend for the birthday boy. In a points scoring system where a win is rewarded with a five point gap, Maxwell was the only rider inside the top four not to get a race win, although he was desperately close in both races two and three and unlucky not to be higher up the leader board.

He overcame a slow start to the weekend as he fine-tuned his Yamaha R1 and picked up the pace in every outing to shadow the race leader in both legs two and three and post fast laps along the way.

“Every day was a lot better than the day before as we got the bike working a little better each time on the track. Getting grip around this track is extremely important and to the teams’ credit, they were able to make the right changes over the weekend to give me what I was after and it showed in speed as my final two laps in the last race were good.

“I would love to have made the podium but it was still an enjoyable weekend and I feel we made some good gains as a team this weekend,” Maxwell explains.

Cru Halliday had a weekend to forget at a track that has seen him struggle with in the past. Halliday finished the weekend with 7-DNF- 8 results in a very uncharacteristic performance. Halliday felt his line choices weren’t good in the first race and because of that, was over riding the bike. He returned on Saturday and improved his speed but some tyre issues forced him from the event. The final race saw Cru inside the top six but he dropped two spots late in the event and had to settle for eighth.

“No doubt it was a tough weekend for me and something I will be working hard to prevent happening again. It’s not the result myself or the team are capable of and I’m really determined to bounce back strongly at the next event because I don’t belong where I finished this weekend,” Halliday said.

The YRT crew have no time to rest as they now head over to Winton for the next round of the Australasian Superbike Championship this weekend. It’s a quick turnaround for the team but they are buoyed by the knowledge gained at Phillip Island and are confident of a good result at Winton.