Positive weekend for Kawasaki at Winton round 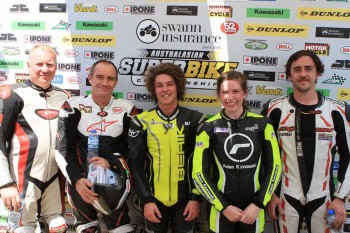 Kawasaki supported riders fought tirelessly in their battle for Swann Insurance Australasian Superbike Championship supremacy while breathtaking racing in the Kawasaki Insurances FX300 Ninja Cup was as entertaining as ever.

The Kawasaki Insurances FX300 Ninja Cup is Australia’s premier class of 300cc motorcycle racing that lends itself to amateur and seasoned competitors alike. The series has provided pleanty of exhilarating moments to date and round 6 of the Swann Insurance Australasian Superbike Championship at Winton Motor Raceway over the weekend was no exception.

The Kawasaki Motors Finance racing team was privileged to have Bryce Van Hoof, saddle up onto their wildcard Ninja 300 racing machine. The last time that Bryce had seen a road racing track, let alone ridden a motorcycle, was when he was competing in the British Superstock 1000 Championship on a Kawasaki Ninja ZX-10R two years prior, making the prospect of racing aboard a Ninja 300 tantalising. 9th, 10th and 9th in races one, two and three respectively, granted Bryce 8th place overall for the day.

“I did quite well considering I hadn’t ridden a bike in 2 years and never even ridden a 300 before! First practice on Friday was my first chance to ride the bike and set it up for racing over the weekend,” Bryce commented.

“The Ninja 300 was awesome and I actually really enjoyed riding it. It handled a lot better than I expected and it was a whole lot of fun. After riding the 600’s and Superbikes, it’s a bit different, but in a good way and I definitely enjoyed it.”

“The Kawasaki Insurances FX300 Ninja Cup is a great racing series. Everyone is pretty much on the same bike considering rules on modifications, it’s cost effective and there are some close battles. A bit of bar banging goes on but everyone still pulls up and has a laugh at the end of it. It’s a great atmosphere and a hell of a lot of fun,” said Bryce who is considering procuring a Ninja 300 for racing in the series next year.

Paul Young managed to again take out the round on the SA Kawasaki BCperformance Ninja 300, to hang onto his lead by a mere 5 points ahead of Queenslander, Tony Jones.

“The team has been building in the 300, 600 and superbike classes and they have put a wonderful group of people together. It’s great to be kicking goals.”

Having the fortune of being mentored by Troy Bayliss, Robbie Menzies challenged Paul Young all the way to second place overall for the round, in what is only his first year of competitive road racing.

On to the Supersport and Superbike categories where Kawasaki supported riders excelled.

A mishap unfortunately saw Matt Walters lay down his Kawasaki Connection Ninja ZX-10R in the competition the day before which accounted for his starting position at the back of the grid for round 6 of the Swann Insurance Australasian Superbike Championship.

“Overall we went well. We had a lot of improvements on the bike and we had the lap times where they should have been so I was happy even though we had a setback on Saturday. We managed to get some positive results and claw our way back into the championship which is great,” Matt commented.

Supersport prodigy, Kyle Buckley, of the Kawasaki supported SA Kawasaki BCperformance racing team, maintained his high-speed performance after winning his first race of the series in the previous round to place 4th overall aboard his Ninja ZX-6R in the Supersport class.

Kawasaki supported riders are looking forward to the final round of the Swan Insurances Australasian Superbike Championship being held at Sydney Motorsport Park from December 4th to 6th.