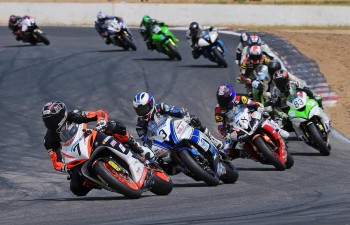 Brayden Elliott has finished third for the penultimate round of the 2015 Swann Insurance Australasian Superbike Championship at Winton Motor Raceway following a mixed start with good practice pace, though a crash in qualifying put Brayden behind on preparations for racing however he was able to recover during Saturday and Sunday and now sits just one point ahead in the Supersport Championship with one event remaining at Sydney Motorsport Park in December.

Continued development of the Hankook Tyres Suzuki GSX-R 600 machines throughout Friday’s four practice sessions saw Brayden set his quickest time in the last run with a 1:25.818 placing him second overall. An unfortunate crash after having only completed the first lap of qualifying saw Elliott qualify 16th, meaning he would come from the rear of the grid for Saturday’s first race.

Following some hard work by the team to bring the bike back up to race spec, Brayden managed to work his way up to sixth in race one, with his fastest lap of a 1:26.218 being just 0.1 seconds from the quickest time of the race.

Ongoing improvements with setup again saw Brayden rise further up to the order to claim fourth in race two before moving to second in race three, subsequently also improving his fastest lap times, recording a 1:26.102 in the final nine lap event, with that being only 0.05 seconds from the fastest time.

The strong development and results earnt Brayden fourth place overall for the day for the AFX-SBK series with his standing for the respective series now being third overall.

On the back of his efforts to improve from the rear of the field on Saturday, Brayden was rewarded with a front row start for all three of Sunday’s Swann Series races. Two hard fought fourth place finishes then brought him to the final race with another strong and engaging battle with his closest points rival for the race lead. A last lap pass saw Elliott go on to take the win, setting the fastest time of the race on the final lap to add his achievement with a 1:25.618.

The day’s results placed Brayden in third for the round with his series lead sitting at just one point entering the final round.

“Round six of the Swann Insurance Australasian Superbike Championship was certainly extremely tough. I felt I had great pace which showed in all practice sessions on Friday although I unfortunately crashed out of qualifying on my first hot lap which wasn’t an ideal way to start things off.” “The team did a great job to repair the bike for Saturday’s racing with the difficult task of starting from the rear of the grid. I was reasonably happy with our efforts to gain a front row starting position for Sunday’s racing which was defiantly my main focus.” “I really gave it my best Sunday to fight for race wins but in the end one race win and third overall was the result I achieved. It was again disappointing to see the difference in straight line speed between the front bikes but with a month to prepare I know we can be fully prepared for the last round. With the Championship coming down to the final round, I will continue to focus on myself guaranteeing my best efforts.” “A special thank you to the local friends, family and fans for making the trip to Winton to show their support, also a thank you to my team for all of their hard work and commitment.”

Round seven, the final round of the 2015 Swann Insurance Australasian Superbike Championship takes place at Sydney Motorsport Park, Eastern Creek, NSW from 4-5 December with a twilight format on both days.