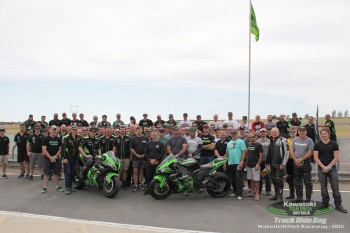 As per usual, the highly anticipated event was sold out a few weeks prior and the track was flooded with Kawasaki devotees of various skill levels and walks of life on the day. Both Novice/ Intermediate and Advance groups took to the track five times, with bonus sessions at the end of the day and lunch included. Very special guest, Yoshimoto Matsuda-San, visited from Kawasaki Heavy Industries to experience the event first hand and to meet the KTGA members in attendance. Matsuda-San is the 2016 Ninja ZX-10R Project Leader, who was also in charge of developing the supercharged Ninja H2 and H2R motorcycles.

Kawasaki accessories and merchandise were available for purchase through a display stand managed by the local Kawasaki dealership, Canberra Motorcycle Centre, and the Pirelli Tyre Services assisted riders with all of their rubber requirements.

Adrian Pelegrin and Dave Ross are no strangers to a road racing track with a 2015 Ninja ZX-10R being the weapon of choice for both of these experienced riders. Both Adrian and Dave were treated to a test ride on the all-new 2016 Ninja ZX-10R and directly after they unmounted, they said that the 2016 model is “Super smooth and super agile! It takes the corners no fuss. Mate, the bike doesn’t even feel like a 1000cc in the way of handling.

The power is hammering but it’s not as aggressive as the 2015 model. A much smoother delivery. The quickshifter is so smooth! The size and brakes left the biggest impression. Incredible! No fade on the brakes whatsoever, super responsive. The suspension reacted so well too.”

Stewart Hablethwaite, who spent many years racing at a national level in Australia said, “I’ve got six at home and it’s going to be seven after today. It’s just so easy to ride fast! It’s beautiful, the braking is just absolutely superb. Through the corners, you look at your lines and you can just go straight through. It’s awesome. It’s just so easy and it’s no hassle to go fast on it. Beautiful. I just said the other day to my wife, that I’m too old for Supersport bikes, but this bike has changed my mind,” Stewart enthused.

The 2016 Ninja ZX-10R is the first 1000cc Supersport motorcycle that Josh Hughes has ever ridden. “The ergonomics were awesome, the breaks are unreal, throttle response is unreal, all the electronics worked perfectly. The acceleration and the power is unreal. Just holding it flat and using the quickshifter is unreal.” Commented Josh.

Sarah Gould made her way down to the Wakefield Park Raceway with her 2009 Z750. “I bought my bike 18 months ago. It was already modified with an Akropovic exhaust and some more bits and pieces that were on it when I picked it up. This is my second track day and I’ve been feeling really confident on this bike. My partner has been following me and he gives me a lot of advice. We’ve been having a great time together here today,” commented Sarah.

Wes Waldock bought his brand new 2016 Ninja 1000 two months ago. “I wanted something that was less cramped than a Supersport. I rode 940km in two days when I was running it in, went to work the next day and felt quite comfortable. I haven’t had it on the track before, and I’ve been showing it a bit of respect with the road tyres and standard setup. It’s got more than enough power for what I want and it’s been a great day out here today,” said Wes.

Glen Pedersen bought his ZRX1200R secondhand and he has owned it for 3 years. “We’re in a Kawasaki club and a few of the boys have bought these as they have gotten older. These things are super versatile. I bought this one off a guy in Victoria and it was dead stock. The beauty of these is that they are well known to be a blank canvas.

It has Ohlin’s suspension, radial callipers, an aftermarket exhaust and a jet kit which are the main things. I haven’t been to a track with this bike. I’m not planning to go out and break lap records! I’ve done plenty of track days with the sports bikes I’ve owned throughout the years but today I’m planning on just having fun.” Glen said.

Kawasaki Motors Australia’s National Sales and Marketing Manager, Robert Walker, said “Our fourth Kawasaki Team Green Australia Track Ride Day event has been our biggest and most successful event of its kind. Attendance levels were astronomical, the atmosphere was exceptional and everyone was just having a magnificent time doing something they love.

The objective of these events is to make it affordable for Kawasaki owners to ride their pride and joy around a track and to create an environment where likeminded enthusiasts can mingle. The success of previous events has proven the immense potential of these track ride days and we are planning to up the ante into 2016,” said Robert.