The 2015 Swann Insurance Australasian Superbike Championship came down to the wire last Saturday evening at Sydney Motorsport Park. It was an epic battle between Team Honda Racing’s Troy Herfoss and Yamaha Racing Team’s Wayne Maxwell, which saw Herfoss claim the title by one single point once the curtains were drawn on this year’s series. CycleOnline.com.au caught up with the Goulburn-based rider moments after his title victory. 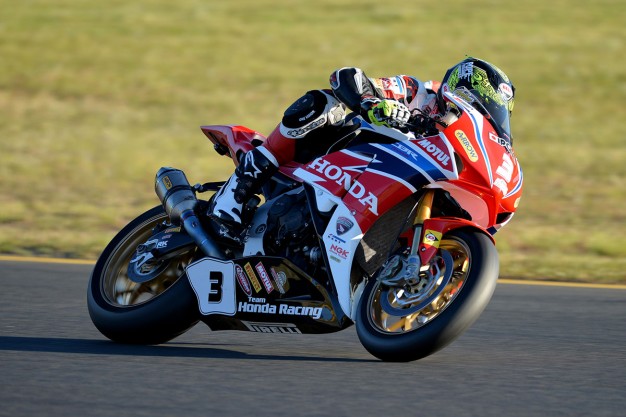 It’s unbelievable! I’ve wanted to win this championship for a long time and be at the top level in Australian superbikes. The way it has happened just makes it so much more special. Wayne [Maxwell] is such a great competitor, to go into the last race with the best man sort of wins, I had the smallest of buffers. One stage during the race I was in it, then I was out of it, then I was in it, and then when I went across the line I was one point ahead of Wayne. It’s something I have dreamt a long time about doing. Like I said, to do it in that way it’s perfect. I’m just so rapt with racing in Australia and motivated to race my motorcycle at the moment.

Like most of the season, it was quite hard to predict what was going to go on for each race. In the FX-Superbike championship you obviously dominated Saturday’s race and ran away with it, but today things were just going everywhere. In that final race, you dropped back a little bit at the same time that Wayne was moving forward, to the point that you were tied in points there in those closing few laps. You ended up getting back past Glenn [Allerton], which eventually gave you the championship. What was going through your mind?

Ah man, starting from yesterday that race win gave me the championship with the one point. Going into today, to be honest I felt like the first two races were missed opportunities as far race wins go, however the objective was to beat Wayne and that happened in the first two races. In that last race, I can’t really explain how stressful it was. There was a point there where I thought I was actually second place in points and I had two Yamaha guys between us, and I couldn’t do anything. We got massive holes in the tyres and I was going backwards. I had to adjust what I was doing – I was trying to ride on the edge of the tyre and I started to point and shoot the bike a little bit more. I got to about three or four more laps to go and I thought ‘right, this is crunch time, this is it so I have to hang it out a bit’. When I passed Glenn it was such a relief, but then moments later I saw Jamie [Stauffer] and Mike [Jones] swapping places and giving Wayne a chance to pass another rider. To be honest I couldn’t pass Cru [Halliday], even though I wanted to get that insurance. My tyre was so bad in the end, I had no grip and I was really just on my edge. In regards to my emotions, at one stage during the race I said to myself, ‘I’ve lost this’. Then ‘I’ve won it’, then ‘I’ve lost it’. The feeling when I crossed the line is just something special as it’s something I’ve always wanted to do. At the moment I just love racing my motorcycle and I feel like we deserve this championship and it feels so good to get it!

Let’s rewind back to the beginning of last year. You had not been in racing there for a little while and you were going to come back as a privateer on a Honda. Then you ended up getting the opportunity to be on the team for round one, which led to being with the team for the rest of the year in a side role. This year however you are in the actual main team as one of the true title contenders. To actually win the championship against Wayne, who defected to Yamaha, that must be a pretty sweet feeling, not just for you, but for Paul Free and the crew as well.

Yeah, you’re right. Going back to the end of last year, I just wanted to start riding a bike again to enjoy it. Paul was generous enough to set me up, a bit of luck went my way, I ended up in the team and with a good opportunity. When Paul said to me that he wanted me on the team for this year, that was it – the objective was to win the championship. Then with Wayne going to Yamaha, it was a bit of an unknown because Yamaha had a new bike. As far as Wayne and I go, he’s a great friend and someone who I know digs deep and he is a fierce competitor. It was so sweet to race with him for a championship, because last year he and I battled so hard. In hindsight it was probably a lot of pressure for him, now that I’ve been in that position going for a championship and to have someone stuffing it up the inside of you all the time and racing for wins, I understand now the pressures he was under. Today I experienced it for myself. Paul, my mechanic Shaun and the whole team have all done a really good job. This Honda CBR1000RR SP is at the end of its development, but it was so refreshing to go out on track on Friday morning and have a different bike and a better bike. We can go into 2016 thinking, you know what, we can make this bike a little bit better. So it’s an unbelievable feeling for the team. Feeling like we are kind of like the under dogs and we have taken it out, it’s so good. 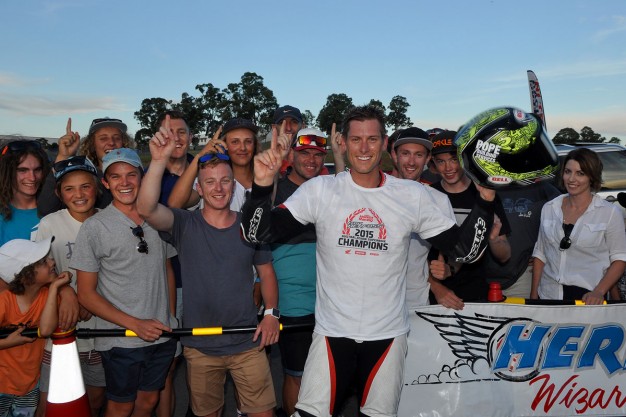 Like you just touched on there, every time we feel like you guys have got the most possible out of the Honda CBR1000RR SP model, you guys just seem to refine it further and get it even better. It’s pretty crazy in a way, just how much it keeps improving year in, year out, plus each round as well.

Yeah, Shaun, my mechanic, goes above and beyond. We had two track days here at Sydney Motorsport Park and it was really hot. I tried to give the best feedback I could and we really didn’t have a good test at all. We went back and Shaun rang me a few times and we got here Thursday night and he said ‘you know what, I’ve been playing around at the factory and I have something we should try’. I said ‘let’s just try it and we’ll roll out on that’. I rolled out of pit lane in free practice one and set a personal best lap time, and then in free practice two another personal best lap time. Then I slowed down and I went again. I came in and said ‘Shaun, this bike is so easy to ride’. From that point we didn’t change the bike. We are going into next year with a bike that is a little bit better again, but who knows what Shaun and Paul can find out for it for next year.

Take nothing away from any title, winning my first ever supermotard championship was great, even a dirt track title when you’re young and America was awesome. Phil and Lynne Tainton gave me a supersport chance as well, however the way this superbike title today was won and how close it was and pressure I felt in those races today, I’ll never forget this championship. I took a year off from racing and Paul got me back into the team and I’m enjoying it more than ever! So the pressure was on today, so it just makes it so much sweeter.

Well, congratulations and enjoy the celebrations.