Queenslander Ant West has had a lengthy international career, largely in grand prix racing including MotoGP, along with selected successful appearances in World Supersport. Phillip Island’s 2016 WorldSSP season opener on 26-28 February will see the return of 34-year-old West to the category in a wildcard appearance as part of the Green Tea X50 team, on board a private Yamaha YZF-R6. CycleOnline.com.au contacted West about that opportunity, as well as this weekend’s Troy Bayliss Classic dirt track event in Taree.

First of all, there’s some exciting stuff coming up for you with the Troy Bayliss Classic and World Supersport at Phillip Island. It’s going to be a good time over the next couple of months.

Yeah, I’m excited about doing World Supersport, but the Bayliss Classic I sort of got roped into doing it. My girlfriend was wanting to do dirt track and I was just going to help her out, but now I’ve in it as well somehow [laughs]. It should be good fun, but it’s going to be hard because there are a lot of Americans that are fast and everyone’s pretty serious about it – I’m just going to have fun with it. The Trinders have given me a bike that’s pretty fast, so I think we should be kind of competitive. I haven’t done dirt track for a while and we had a practice on the weekend at Kempsey, which was my first time on oil since ’96 so that was a bit strange [laughs]! We had some fun and it should be good. And then I’m really looking forward to this World Supersport race at Phillip Island with an Australian sponsor, Australian built bike. Hopefully I can go down and kick some arse and beat these guys from Europe.

More on that Supersport race in a moment, because in the lead-up you’ve been doing all kinds of riding and spending a lot of time on the dirt bike mostly. It looks like you’ve just been enjoying riding as much as anything…

I’ve been riding pretty much anything, getting on all sorts of different bikes and enjoying it again. After doing GPs for so long you sort of get a bit annoyed with the politics, the money and the bullshit. You don’t enjoy it anymore. So I’ve been spending the last couple of months jumping on anything I can and sort of getting back to why we started, having fun riding. It has been good riding different bikes, it’s been cool.

You were at Phillip Island not too long again for the Australian Motorcycle Grand Prix, but this time you’re going back on a very different machine. The Green Tea X50 Yamaha R6 should be a competitive package in a class that you’ve had some success in before. How’s preparations coming along?

The Trinders are putting a big effort in trying to get everything they need in place to be competitive. When they first said they wanted to do it I kind of told them they need this engine, these parts and other things to be competitive and they were like ‘okay, we’ll get it’. I was surprised that they were willing to put in for the bike like that and I really think we can be competitive. I’m looking forward to getting on the bike when it’s ready and I think it will be fast enough to run at the front. I’ve had good races in Supersport before, just because it is easier to get on a bike that’s competitive. Whereas in grand prix it’s political, so hard to get on something that’s good – it costs like 10 times more to do it. I think this is an opportunity to get on something, have some fun and try to run up front rather than fight for 15th or 20th position, you know? It’s always more fun to fight for the win. Hopefully it will open the doors for the future. 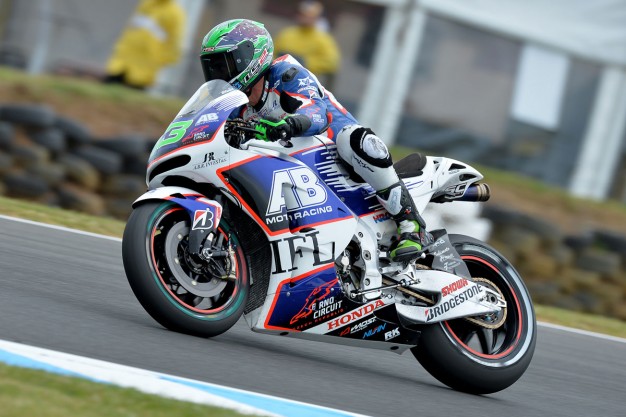 So at this stage it’s just the one-off race?

Yeah, at the moment it’s just Phillip Island. I don’t really have any other options for racing this year because all the teams in Europe now want big money, which is hard for me with no sponsorship. I’m pretty sick of the politics and sick of each year just trying to survive, living almost off no money [laughs]. So, I’m going to try maybe race BSB in the English championship on a BMW or also in CEV Moto2 on an FTR – it looks like I could be doing both. Nothing’s signed but that looks like what I’ll be doing.

This Phillip Island race is sort of full circle for you in a way. Back in 1998 you did a wildcard on the 125GP and all these years later you’re back in another one-off world championship appearance at home. You’re still there, still going around and are still competitive as long as you have the right bike beneath you. It’s been a long career, but have you enjoyed it?

Umm… [laughs] that’s kind of a hard one to answer. Like, yeah, I did that one wildcard back in ’98 and I’ve raced the world championship for the last 17 years. It’s been really f**king hard, mentally is the biggest problem, living in Europe and being away from your family. But the plus side is getting to see the world and meeting different people, racing bikes pretty much all your life. I don’t know if I’d want to do it all again, I’d probably do it a lot differently, but it’s been extreme. You have really high highs and other times you’re so low that you’re depressed. It’s up and down, up and down, pretty emotional, but it’s been a fun ride. Just frustrating not having the results I really wanted, but I still feel like I’ve got a lot of fight in me and I hope to spend the next five or seven years, try to win something. I’m hoping this is the start of something, resetting and getting back to Europe so I can start winning over there.

That would definitely be good and I’m sure there will be a lot of fans behind you at Phillip Island. We’re looking forward to it for sure.

Yeah, thanks. I’m hoping we get good support down there because it is something different with an Australian sponsor, team and rider. It’s been a long time since there’s been a team like that with a chance of actually being competitive, which is exciting for me and hopefully for the fans there as well. Hopefully they’re behind us, because the more support we have, the more chance we can get Green Tea X50 support into the future. It’d be good to get them excited enough to do the rest of the year on this thing [laughs], that’s what I’m hoping will happen, but at the moment we’ll do this one and see where it goes from there.