For the second time ever, the Ken Wootton Perpetual Trophy was tied between two riders at last weekend’s International Island Classic in the Mitchelton Wines International Challenge. For 2016, Northern Irishman Jeremy McWilliams and Victorian Jed Metcher were the two winners, taking out the event with 156 points apiece. CycleOnline.com.au caught up with Jed straight after the final race last weekend to his thoughts on winning the event for the first time in career. 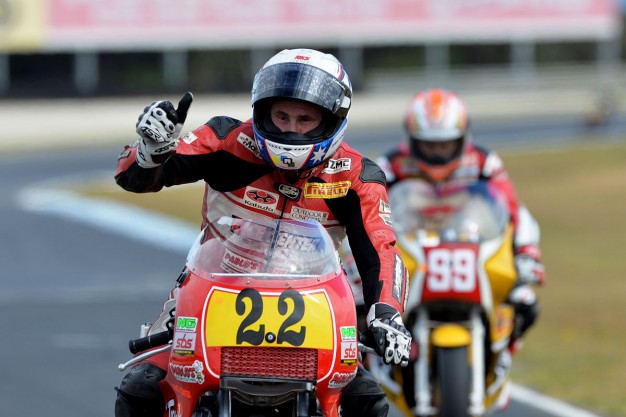 Jed, first of all congratulations on taking out the Ken Wootton Perpetual Trophy. You and Jeremy are joint winners of the trophy, so do you find it ironic that you two have won it and a few years ago he was your team manager when you were racing in World Supersport?

I wouldn’t say it’s ironic really. Jeremy was always going to be one of the guys to compete for the outright honours this year. I think after my result last year I was one of those guys to, especially now being on the T-Rex Racing bike with the Race Center support. We were always going to figure it out to some degree. Really not getting a second or a win yesterday did hurt us overall, but that was purely because of the lack of track time. If we had a little bit more time we would have been faster. I think ultimately our bikes are not too far behind the British guys, but they were a little bit of a step behind what they are allowed technology-wise. So we have to work quite hard to get these bikes up to spec to what they are. Rex [Wolfenden] does an amazing job and with the Race Center suspension, the combination is just perfect – it’s like match made in heaven almost and the T-Rex Honda Harris F1 handled really well. We didn’t quite go as fast as I was hoping that we would, but we’ll work on that and be back next year and try and go faster.

Obviously all racers want to win outright, but to be a joint winner are you okay with that?

Yeah I guess so… I got no choice, do I? I needed to perform better yesterday. I think the circumstances were quite unique. We had rain on Friday, which cancelled most of the sessions, the International Challenge being one of them. Then on Saturday in an effort to eliminate the chatter we made a drastic decision with the set-up, which was a slight negative, however we did learn from that. It was a real indication with the fact that we did go backwards on where we could go to go forward. We learnt from that. If we have had gone forward at that point I think we would have won three races out of the four.

To win the Ken Wootton Perpetual Trophy, what does it mean to you? You have spent a bit of time with Ken at race tracks in the past, so how does it feel to have your name edged into what is a prestigious trophy now?

It was an absolute honour. Ken was an amazing person in the motorcycling industry. He put so much effort into coming and seeing every rider, especially when I was young racing in the Australian championship. I actually saw Ken at the Czech World Superbike round before he passed away. His enthusiasm and love for the sport was so obvious, which showed in everything that he did. It’s a privilege to be able to have my name on the trophy that’s for sure. I’ll be trying to win it again next year. 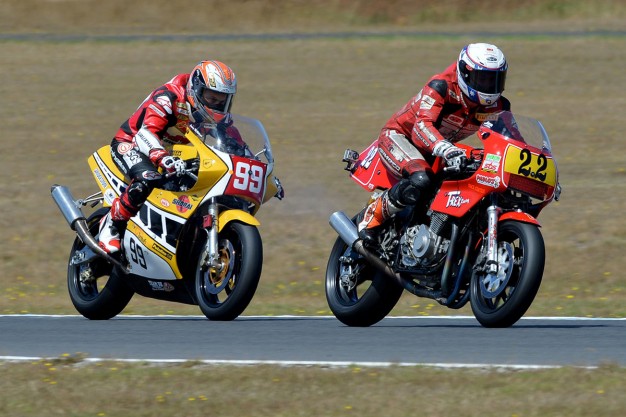 T-Rex Racing and Race Center and you made a lot of changes to the bike over the weekend. You had a lot of chatter problems, so what exactly did you guys do to the bike to iron out the problem?

From the start of the weekend we had the bike quite heavily valved. One of the main restrictions with the Honda Harris F1 chassis the engine casing touched the ground. So what we wanted to do was to create a bike that sat a little higher mid-corner. The first step on Thursday was to find a balance with the bike the way it was. We pretty much realised that the bike was very, very steep in geometry and trail figures. So we started to flatten the bike out to the point where we realised the chatter didn’t go away due to the balance factor. Darren [Sciberras] re-valved the forks and we just raised the whole bike up and that made it a little worse. By the end of Saturday it was really clear that the bike wanted to be lower. The lower centre of gravity fixed the chatter, but we then found that the bike was a little bit too lazy. So we steepened it up and soften the front off a bit for the first race on Sunday. The bike was maybe about 60 percent better, but just lacked rear edge grip. For the last race on Sunday we found the rear edge grip, but we lost a bit of steering, so the lap times were not as fast as it was like in the first race, but I was able to push the front a lot harder. That is how I got away from the pack and just managed to hold the gap from there.

Tell us about race four. You simply brained everyone and beat Jeremy by 2.678s. Just how hard were you pushing in that last race?

I wasn’t out of control. I just made sure I hit all the apexes especially on the first two laps on the exits, because I knew Jeremy’s bike quick down the main straight. So I just concentrated in those areas that I knew he was really fast in from the previous races. Jeremy and Beau [Beaton] got tangled up, so I managed to get a two second lead in two laps. I was struggling a little bit with the turning of the bike. It was more difficult to get a low 37, but because Jeremy was battling with Beau we managed to get away with it and win the race.

One more thing, you have done series such as the IDM Superbikes, BSB, World Supersport and so on. Where does the International Island Classic rank for you in your mind?

The event is amazing. Phillip Island Operations do such a professional job organising it and to be held at a beautiful track like Phillip Island makes it just that much better. The track is so fast and flowing and enjoyable. The event rates really highly in my book that’s for sure. I’ll be back every year.