Queenslander Anthony West had high expectations going into the Phillip Island opening round of the 2016 World Supersport Championship, determined to prove he still has the speed to challenge for wins in one of the most spectacular categories of world championship competition. With a privateer team fielding a home-built YZF-R6 and vital backing from Green Tea X50, the 34-year-old grand prix veteran stunned on Sunday when he climbed from 15th on the grid to lead the race and eventually cross the finish line in third place as a wildcard. He’s hoping it will boost him into the series fulltime for the remainder of the year, however in the meantime, CycleOnline.com.au tracked him down post-race to celebrate the popular result. 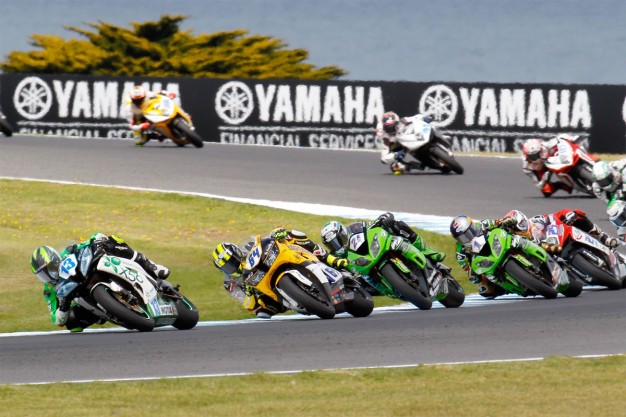 Yeah, definitely! From what we have put together, thrown a bunch of Aussie guys in together that didn’t know each other, didn’t know the bike and throwing this bike together last-minute has been quite ambitious. I didn’t think we were going to be even close to the front, we all just kept trying to push it and get the best out of the bike that we could and I just rode the wheels off it. I think it’s the best result that we could possibly get with this bike and the equipment we had. If you see what we had to deal with against these world championship guys, it’s normally a near impossible effort, but we’ve pulled it off and hopefully it helps me for continuing racing this year. I need a ride for the next one, so hopefully this will wake a few of the other teams up to give me a bike, but yeah just happy with the result. Big thanks to Green Tea X50 for putting the money in, it’s the first time I’ve had any real sponsorship – without them I wouldn’t have had the chance to be here today and have that result.

You’ve had a lot of good results in your career, sort of sporadically to get a win here and there, and then some podiums between Moto2 and Supersport. So how does this rank?

The last few months have been quite strange, just mentally it’s been really difficult. I have had a few issues with some things at home and other problems, sort of been thinking if it’s all been worth it to keep going, struggling with money and struggling with a lot of things. This is a big relief. I have been going through a lot of shit just to be here right now and it’s a big pay-off with all the stuff I have gone through, it’s a good payback to myself and to everyone else that has been around me and has been trying to support me. This whole year is about trying to get back to having fun racing, winning races and fighting for the front, instead of being in a place where you know you can’t win if you know you don’t have the right material. We didn’t have the right material here, but we are still able to show that I still go fast. So I think it’s just for my career, what I want to do right now is come here, World Superbike, so I think this can’t hurt. 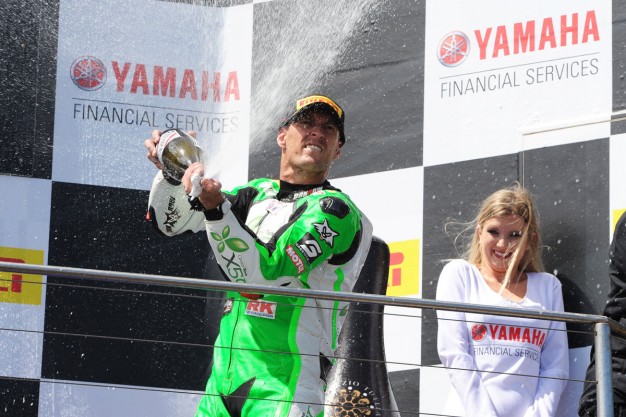 It seems like every time that you get on a Supersport bike you have had good results. You’re almost automatically right there up the front and it seems to be good fit…

Obviously the Moto2 last year has been hard, but if you don’t have the right equipment there, it’s hard to be competitive. But here you can sort of get away with the bike not being 100 percent, because they move around so much. You can sort of fight the bike to make it work and it’s sort of suits, I guess, my style. I don’t mind if the bike is sliding around, I try and keep it as clean as I can, I feel like I slide in the right way. So that’s why I’d rather be on a Superbike because I prefer having a bike hanging out and using the rear-end of the bike and sliding it. But it also seems to work on a Supersport as well and I seem to be able to make them go fast, so not sure what it is. The results have always been good every time I have jumped on it. I have sort of forgotten about GP and thinking I’d like to be here because you have the chance to be on a competitive bike and actually have a chance to win the race. Mentally already that gives you that extra speed, because you know if you do push hard you’re going to get a good result if you push hard. In GP with an under-powered bike you’ve got no chance, whereas here pushing hard can make that little difference if the bike isn’t 100 percent and that’s what we did today.

Just finally, you’re obviously a wildcard, but now sit third in the championship. Are you hoping that phone rings for Thailand?

Yeah, definitely. I have got nothing for the rest of the year and definitely I need a ride, so I hope this has achieved exactly what I was doing here, is trying to get a ride for the rest of the year. I would like to keep racing in this championship and hopefully keep that position up in the top three, but we will see what happens. If I do get another ride it’s going to be hard jumping on a a different bike, but I am up for anything and I don’t have anything right now, so I hope this is going to make a few people wake up or a sponsor come out form somewhere. I just hope we can get that support, just like this sponsor has done now. If we can get them on board we can get a few more people involved form Australia and I could find a ride if people can put money in, that’s what we need. Then I would be able to get on a bike and keep continuing the championship.

No worries, I hope it works out! Awesome job, it was definitely exciting to watch the fans loved it, so well done.