Yamaha Racing Team’s Glenn Allerton stole the show at the opening round of the 2016 Yamaha Motor Finance Australian Superbike Championship presented by Motul Pirelli, winning all three races on the ultra-important World Superbike weekend at Phillip Island. CycleOnline.com.au called Allerton this week to discuss the weekend that was and more in his bid for a fourth ASBK crown. 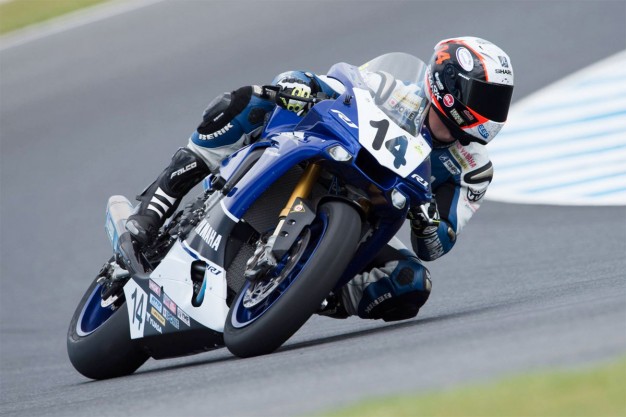 You swept round one of the Australian Superbike Championship with three from three wins. It was an awesome way to start the season for you…

The races were particularly close, there were a lot of guys in the lead group at times, and a few different people leading the races, but it seemed like as long as you were in that group when it counted on the final lap you were able to work your way into the right position by the finish line. Was that how it felt to you?

Yeah, you know it’s no secret that Phillip Island is hard on tyres and whenever we got into the race and we started to get going, whenever someone was in front of me I felt like the pace could of been at faster, so I found myself going to the front and trying to pick up the pace to try and stretch the groups out, try to get ourselves away from whoever could be in there to challenge on the last lap. Whenever I got to the front everyone seemed to be able to go with me, especially the Ducati because I think Mike’s bike was quite fast down the straight and he could always use the straightline speed to hang in there with me, and then they would always try and pass me. But like I said, no matter what when somebody was in front I felt I had speed in a lot of areas and I had lots of drive grip, with a good feeling at the front as well. So once I realised, in pretty much all of the races except the first one, once I realised it was going to be a battle I always tried to position myself so I could attack on the last lap and try to put a good last lap in and get away from them to get the race win. I wasn’t quite fast enough to break away in any of the races, but a lot of that had to do with trying to take care of the tyre too. I felt like I had the speed right away, but in the back of my mind I knew if I pushed as fast as I could that the tyre isn’t going to last the race distance. You only really have to win a race by a couple of millimetres and that will do the job.

I remember bumping into you after qualifying and you qualified fifth, but even at that point in the weekend you sort of had that feeling where you knew you had the potential to win the races. It didn’t affect you too much starting from the second row?

No, it didn’t. The qualifying session got cut short by a red flag, plus I had an issue where I just wasn’t prepared for that session myself, and the first part of qualifying was a write-off until the red flag came out. We were just buried in the pack because there was such a big group of riders, which is great and I enjoy having all those people out there, but it’s not ideal when you’re trying to qualify. I still love the fact that when I’m on the track there is a whole bunch of people on the track and it’s good to see our sport is still strong. I think my fastest lap was a 33.5s or something like that and I just knew if I had a clear lap and no issues then I would of been, if I wasn’t on pole, I would of been bloody close to it. My confidence level was strong and it’s the sort of place at Phillip Island where the draft comes into account and I knew I was going to get myself back up the front. 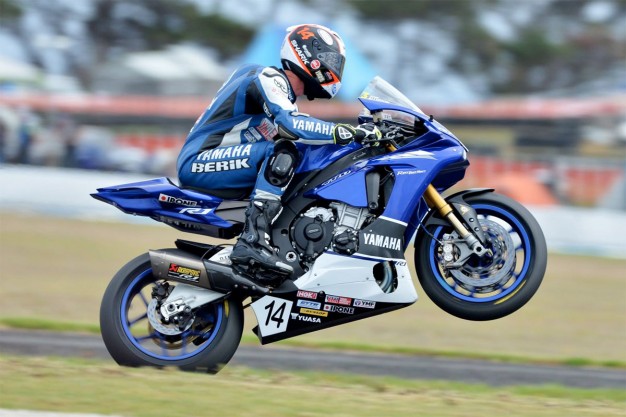 What was the standout race for you. There was obviously three really tight ones, but did any of them stand out in particular for you?

It’s kind of a blur because there was so much racing that happened. The first one was good because obviously there was an accident and I know a lot of people got disadvantaged by Jamie [Stauffer’s] accident, but I pretty much led from the first lap to the end. Mike attacked me a couple of times, but really didn’t make anything stick. For me it’s the first race of the year and Phillip Island is a track where you have to look after the bike, but still be fast, so to lead all the way to the end and still be fast is a pretty good feeling. It’s not easy, number one to lead, and not easy to keep the tyre on the back of the bike and to win the race. It’s in my mind that I’ve done all the hard work off the bike and I’m in a good position with the team doing a great job. We’re a strong package, so the confidence just grows off the back of that, knowing I can get out the front and lead, and I don’t have to sit behind somebody and let them do the pace-setting.

This year you have been reunited with Dave Krsevan from Krooztune in terms of suspension set-up, who were part of your title winning-year on the BMW, so tell us about that. It seems it has helped you with taking that next step with the R1M…

For sure, I mean last year we lost Ryan, who was our suspension guy, which is unfortunate and it left a bit of a void in the team. With some conversations with John Redding, the race team manager, he and Dave from Krooztune have been friends for a long time. So like you said, Dave was my suspension guy when I was winning championships on the BMW, so I have learned a lot from Dave when it comes to being at the race track. We have a really good connection in communication, so when I speak to him about the feeling I have with the bike, we have that longtime connection there and he understands what I’m talking about, so we are able to make changes to the bike. When we were at Eastern Creek, right towards the end on the test he made some changes to the bike, just with basic geometry, and to me the bike came right to life at end and that’s the feeling I’d carried into Phillip Island. It’s great to work with Dave again, he’s got a wealth of knowledge and experience, and I know everytime I get on the bike it’s going to be 100 percent, along with my mechanic Chucker, Kev Marshall and Jeff. I have got a pretty strong force of guys there that can give me the motorbike I need to go out and try and win this championship.

Just finally, Yamaha Racing Team confirmed they’re doing the ASBK for the full season, so as a three-time champion already, this is a perfect way to start the season and to lead the championship from the outset. A good start to try and get title number four…

Yeah, I couldn’t ask for a better start! It’s obviously going to be a tough year, we’ve got some good competitors like every single one of all the factory bikes and a couple of other guys are going to be strong. So for me to try and go up for my fourth championship, which is really my goal, is to be a four-time or possibly a five-time Australian Superbike Champion, we’ve got to do everything right. A couple of times it’s been too little, too late, so to get off to a great start like this is awesome. We go to a track that I’m really familiar with next round at Wakefield Park and I’ve always been real strong there. I’m really excited about racing in Perth again too, because I have the lap record at that track and I love that place. One of my longtime personal sponsors Di Candilo Steel City is based in Perth and to go over there and race in front of them and try to win would be awesome. So yeah, our championship is looking great, I’ve got a really good team around me and I’ve just got a good connection with bike at the moment. After one season on the Yamaha I kind of expected to be in this position, so yeah it’s all going good!