Text updates from the second round of this year's ASBK series.

Round two of the 2016 Yamaha Motor Finance Australian Superbike Championship presented by Motul Pirelli is on this Easter Sunday at Wakefield Park. Racefeed will feature race-by-race rundowns of the Superbike and Supersport categories, as well as support class updates at stages during the day. 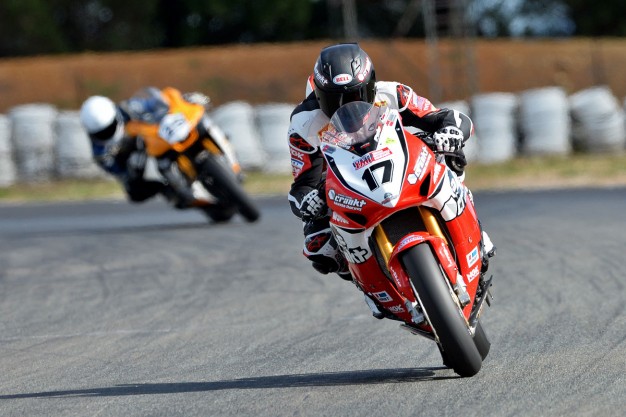 Supersport race one:
Pole-setter Sam Clarke (Kawasaki) won a shortened first Supersport race at Wakefield Park this morning, red-flagged following 13 of the 16 scheduled laps. Clarke led the entire race for an eventual victory of 0.159s over Luke Mitchell (Yamaha), who had made his way by Clarke just prior to the red flag – the results decided on the lap prior. Behind the impressive leading duo was Troy Guenther (Yamaha) in a lonely third, while Callum Spriggs (Kawasaki) worked his way up the order for a fighting fourth. Ben Blyth (Yamaha) rounded out the top five.

Superbike race one:
Following three red flags and a reschedule of events, the opening Superbike race of the round finally got underway for a shortened 12-lap duration, albeit without DesmoSport Ducati’s Mike Jones after he was deemed the cause of the final stoppage prior to lunch. Once the final action got underway it was local hero Troy Herfoss who led a Crankt Protein Honda Racing 1-2 finish, after Yamaha Racing Team teammates Glenn Allerton – who was in the lead at the time – and Wayne Maxwell crashed at turn five in separate incidents. That allowed Herfoss to sprint to a 1.793s victory over guest teammate Ant West, with Cru Halliday (Yamaha Racing Team) recovering from an early off-track excursion caused by lapped traffic to claim the final spot on the podium. In fourth was Daniel Falzon (JD Racing Yamaha), getting the better of Ben Burke (SA Kawasaki BCperformance). The top 10 was completed by Supersport champion Brayden Elliott (Suzuki), Next Gen Motorsports Suzuki duo Sloan Frost and Ryan Hampton, as well as Adam Senior (Yamaha) and Nathan Spiteri (Honda). New championship leader Herfoss’ fastest lap of 57.540s was a new race lap record at Wakefield Park for the Superbike category.

Support class update:
Race two of the supporting acts have been run in the first half of today’s proceedings, firstly with Sam Condon edging out Brandon Demmery by 0.103s in the Production class, with Callum Alderson third across the line. In Moto3/125GP it was Brian Houghton who won comfortably from Locky Taylor, who in turn only just edged out Tayla Relph for the runner-up result. And in the R3 Cup race it was Zac Levy who led Hunter Ford across the line by 0.156s and Alderson backing up for another podium in third, only 0.182 off the top spot.

Supersport race two:
The second Australian Supersport race of the round was a thriller, Clarke managing back-to-back wins for the round overall in a convincing performance. Clarke was again involved in an entertaining battle with Mitchell, the pair crossing the line separated by just 0.136s while this time title leader Guenther was also right in the mix for third. He held out Cambridge Olivier (Yamaha) for the result, as Cube Racing’s Callum Spriggs ended race two in fifth. The overall results mirrored race two, with Clarke winning from Mitchell and Guenther.

Superbike race two:
Yamaha Racing Team’s Maxwell dominated the second race of the round, accelerating away from the field across the 16 laps for a 5.179s victory. It was a spectacular rebound from Maxwell after he crashed out of race one earlier this afternoon, crossing the finish line ahead of West, who scored a second runner-up result of the day. A late run-off from charging teammate Herfoss cost him a race two podium result, however fourth was enough to secure him the overall. That also allowed Allerton on his back-up bike to salvage third, while behind Herfoss in fifth was top privateer Burke. Filling the top 10 was Elliott, Frost, Hampton, Senior and Joel Beard (Kawasaki). Overall for the round Herfoss was the victory and new championship leader, from West and Burke, who took full advantage of consistencies throughout the two races. There was further controversy in the race after Halliday and Falzon said they were taken out by West in the first corner of the opening lap, while Jones was ruled out with technical issues at the midway point as he was in the battle for the top five.

Support class update:
In the third and final race of the Productions it was Demmery who hit back for the race and round win. He won the final outing over Reid Battye, while earlier winner Condon crossed the line third. Overall it was Demmery from Alderson and Aidan Hayes in the Over 300 category, while Battye got the better of Condon and Drew Sells in the Up To 300 ranks. In the third and final Moto3/125GP race for the weekend it was Houghton who completed the sweep from Relph and Ben Leonard, which also made up the overall podium due to a non points score of Locky Taylor. It was again Levy who won the final R3 Cup race for the overall, this time out ahead of Alderson and Ford. For the round Levy was the dominant victor from Alderson, Ford, Ty Lunch and Hayes.