Crankt Protein Honda Racing’s Troy Herfoss entered the Wakefield Park round of the 2016 Yamaha Motor Finance Australian Superbike Championship (ASBK) presented by Motul Pirelli as the pre-race favourite and he delivered. With a 1-4 scorecard on one of the most dramatic weekends in memory, Herfoss also took over the title lead at his home round. CycleOnline.com.au quickly spoke to him post-race for the impression. 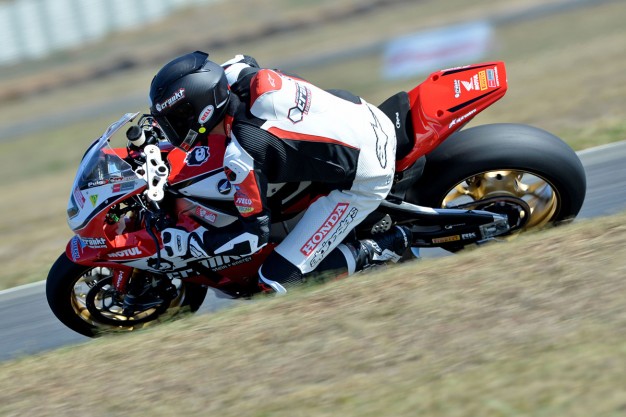 Troy, this weekend you got the overall win here at Wakefield Park, winning race one and fourth in race two. It’s been an eventful day, but tell us about yours specifically…

Yeah, it was very eventful. Overall it’s been an almost perfect weekend. Fastest in qualifying and a new track record, the fastest ever lap here, race one lap record and race win. But it seems like I can never get a perfect weekend here at Wakefield Park, as I always seem to have one bad race, which was race two. Going back to race one, that was a stressful time because there was three restarts then eventually it was rescheduled, so it was just play it safe. It was funny because I thought in that race I didn’t have a lot of grip and then I saw people start crashing. I was just lucky I was given a gift there and just babied it home. Race two it looked as if I got the holeshot, but Anthony [West] just came up underneath me at turn one – it was just late in the corner and I had to sit it up, which sent me back to fifth. It wasn’t so bad, but Wayne [Maxwell] pulled the pin straight away and I couldn’t get past. It was just unlucky for me, but Wayne rode a great race and did what he had to do to get the race win. In the end it was all my fault really. I got up to second and I was just a bit impatient trying to pass a lapped rider and I hit a false natural into the last turn and ended up in the grass. Overall I expected that I could win the overall, but I didn’t expect to leave here leading the championship, so that’s pretty good.

There has been a lot of talk in regards to the championship, the Herfoss, Maxwell, Allerton rivalry. What were your thoughts first of all when you saw Allerton first come off, then Maxwell come off in race one?

You know it’s funny, I feel like with the combination of the Honda CBR1000RR SP and the Pirelli tyres and being my home track, I felt like I had no doubt that we’re the strongest package. I proved that in qualifying yesterday when I needed to do a lap time and I did it. Then in race one I was just so comfortable doing them times. They are fast riders and they are going to do those times, but I just know I was so much more comfortable doing the times. I’m glad both Wayne and Glenn are okay. The tyres and bikes are good and I know at Sydney Motorsport Park we are going to be pretty strong at the end of the race. It just feels nice to honestly feel like that I’m on the best package out there at the moment. It’s going to be exciting at Sydney Motorsport Park, the championship is really close now, only two points between myself and Glenn, with Wayne only 15 points behind, so it’s shaping up to be another great year. 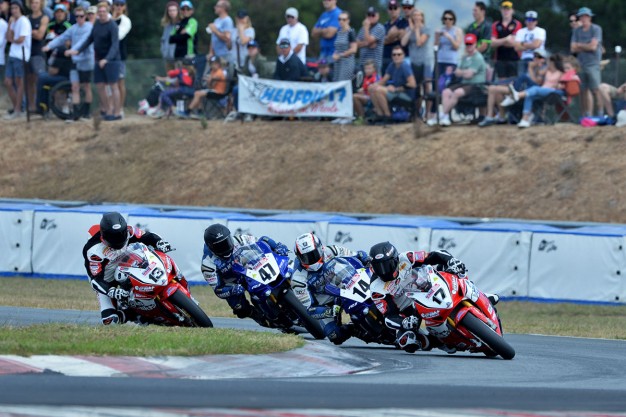 You obviously have a lot of experience on the Pirelli tyres at Phillip Island. The Crankt Protein Honda Racing team has carried the Pirelli sponsorship for a while now, however Last year was a controlled tyre situation. Now that you’re racing on them everywhere, it seems like you are pretty impressed with the Pirellis here at Wakefield Park and that will also lead into the next round at Sydney…

That’s right and Pirelli has been a major sponsor for a few years, but I have only got to ride on them at Phillip Island. For me Phillip Island is such a fast track and it’s been so hard to get my head around the tyre and take risk to try and learn about the tyre on such a fast track. So to come here to Wakefield where I’m already comfortable already and it’s a bit slower, I got to learn a bit about the front tyre. It’s such a different feel to what we have had. The test here before this round and now this weekend I feel that I really understand the front tyre a lot and the rear tyre has a lot of grip. I’m looking forward to going back to Phillip Island now that I have a better understanding of the tyre. I’m really excited about the championship, because that Pirelli SC0 is such a great tyre. All race long I can just knock out the times, hopefully it’s the same thing at Sydney Motorsport Park and looking forward to hopefully being one of the stronger guys there.

Well done again on a great weekend, we’ll see you at round three.