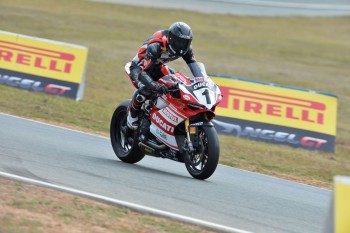 DesmoSport Ducati’s Mike Jones will come into round three of the 2016 Australian Superbike Championship at Sydney Motorsport Park on 16-17 April determined to get his title challenge back on track.

The defending ASBK champion encountered a frustrating double DNF at Wakefield Park’s second round last month, but remains focused on reversing his and the team’s fortunes when the series resumes this weekend in Sydney.

“I’m obviously looking forward to going to Sydney with the DesmoSport Ducati team and racing the 1299 Panigale S there,” said Jones, who is now ranked fifth in the standings. “I believe that qualifying will be crucial, if we can do that well it will give us the best shot of getting away and racing up front with the top guys.

“Racing at Sydney Motorsport Park in the past has proved to be quite a successful place for me, so it will be good to get there on the Ducati and see how we go at a track I’ve won races at before. We did a test a few weeks ago and that was positive, we weren’t on the actual race bike, but it was very good for us.”

Jones made a positive first impression on board the DesmoSport Ducati 1299 Panigale S at Phillip Island’s opening round, securing second on the podium overall, and that type of form will serve him well around the 3.93km Sydney Motorsport Park circuit.

“We have close to 50 sponsors and associates coming out to experience the round this weekend,” explained team co-owner/manager Ben Henry. “After a difficult weekend at Wakefield Park we’re very, very keen to turn it around and get some strong points on the board.

“The bikes are fresh and there’s no reason we won’t be successful after a good test in Sydney. We’re coming in confident with the overall package and Mike, who has shown he is capable of winning there a number of times.”

Official practice for the DesmoSport Ducati team will commence at Sydney Motorsport Park on Saturday morning before Superpole qualifying takes place later that afternoon on 16 April. The pair of ASBK championship races will be contested on Sunday, 17 April. Visit www.asbk.com.au for further information on the event.