Post-race updates direct from round three all day long.

Follow all the action direct from Sydney Motorsport Park’s third round of the 2016 Yamaha Motor Finance Australian Superbike Championship presented by Motul Pirelli. CycleOnline.com.au will update this feature directly following each race as they happen throughout the round. 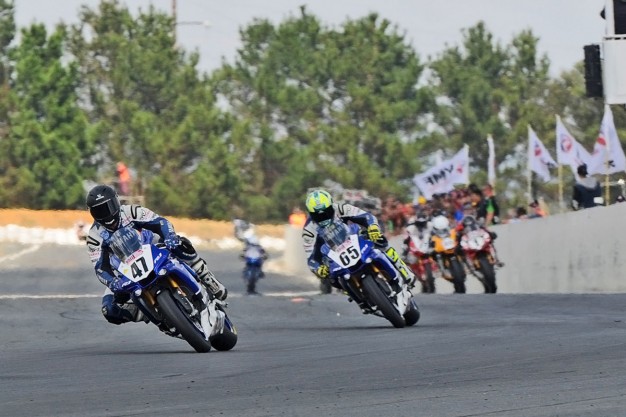 Motul Supersport Race 1:
A charging Mitch Levy has won the opening race of the Australian Supersport Championship in Sydney this morning, the Yamaha rider winning by 1.730s over Callum Spriggs (Kawasaki), who got the better of Luke Mitchell (Yamaha) for the second and third places on the podium. Fourth was Wakefield Park winner Sam Clarke (Kawasaki), while Troy Guenther (Yamaha) completed the top five. The top 10 was rounded out by Giuseppe Scarcella (Honda), Ben Blyth (Yamaha), Robbie Menzies (Kawasaki) and Chris Quinn (Yamaha).

YMI Superbike Race 1:
Yamaha Racing Team’s Wayne Maxwell led a Yamaha 1-2 in the opening Superbike stoush of the round, overcoming teammate Glenn Allerton by 0.219s at the conclusion of the 12-lap duration. In third, a further six and a half seconds down the track, was Mike Jones (DesmoSport Ducati), getting the better of Cru Halliday and denying a YRT 1-2-3 result in the process. Crankt Protein Honda Racing duo Troy Herfoss and Jamie Stauffer crossed the finish in fifth and sixth, while Daniel Falzon (JD Racing), Matt Walters (Kawasaki Connection Repsol), Michael Blair (IPONE Yamaha) and Brayden Elliott (Suzuki) were the remaining top 10 finishers.

Motul Supersport Race 2:
A wet second Supersport race of the round saw Western Australian Clarke emerge as the race winning, two and a half seconds ahead of Spriggs, with Cube Racing teammate Menzies completing the race podium. That trio was ahead of race one winner Levy, while Quinn splashed his way to a top five result. Completing the top 10 was Blyth, pole position holder Cambridge Olivier (Yamaha), Scarcella, Ted Collins (Suzuki) and Guenther. Overall for the round it was Levy from Spriggs and Clarke, while in terms of the championship Guenther still leads, from Clarke and Spriggs.

YMI Superbike Race 2:
It was wet and wild by the time race two of the Superbikes hit the track in the afternoon, with Maxwell managing to take home a perfect weekend – pole position and both race wins despite the differing conditions. He crossed the line 14.110s ahead of YRT teammate Allerton for the second time today, with Jones making it a repeat of the opening race podium in third. Fourth place marked a credible return to racing for Stauffer, as Walters was almost directly behind him in fifth. Class rookie Elliott brought his Suzuki to sixth ahead of previous title leader Herfoss, as Adam Senior (Yamaha), Simon Galloway (Yamaha) and Paul Dutton (Yamaha) revelled in the conditions to fill the top 10. Overall it was Maxwell from Allerton and Jones, which has resulted in Allerton reclaiming the lead in the series two points ahead of Maxwell and a further six in front of Herfoss.