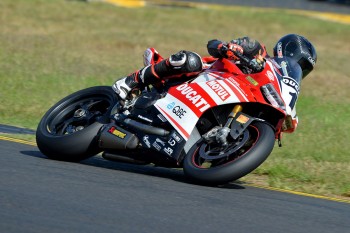 It was a welcome return to the podium for DesmoSport Ducati’s reigning Australian Superbike Champion Mike Jones at Sydney Motorsport Park on Sunday, finishing third overall.

Jones secured third on the grid in Saturday’s Superpole qualifying with a flying 1m30.349s laptime on board the 1299 Panigale S, setting him up for pair of strong 12-lap races on Sunday. The opening leg was contested in dry conditions, with Jones crossing the line in third around the 3.93km Sydney-based circuit. He backed that result up in wet conditions later during the afternoon to clinch third for the round.

“It was an exceptional weekend for myself and the DesmoSport Ducati team,” number one plate holder Jones explained. “We made good steps forward with the setting and qualifying third displayed that. To go on and finish both races on the podium was extremely positive.

“I’ve taken a lot of confidence from this result, it was a nice way to bounce back from the previous round, and more in line with where we were at round one. It was my first time on the Ducati in the wet conditions and it took a while to find my feet, but the bike was relatively easy to ride and the Pirelli tyres were fantastic all weekend long, both in the wet and dry.

“We’ve moved up a position in the championship from fifth to fourth and that’s great for us, the points gap is pretty steady at this stage and overall we’re doing well. For the second half of the championship we can really focus on this as the foundation and keep moving forward from here.”

DesmoSport Ducati co-owner/manager Ben Henry was pleased with the consistent performance of Jones and the team at Sydney Motorsport Park, which has placed them fourth in the championship at the midway point – 40 points outside of the lead.

“This was a really good weekend for Mike and the entire DesmoSport Ducati team,” Henry reflected. “To have Mike qualify in third with an extremely fast laptime and then carry that into race one with the same result, it shows we are right there in the hunt for the top finishes.

“When the rain came for race two it certainly mixed things up, but yet again the bike and Pirellis performed flawlessly and Mike adapted to the conditions quickly. It’s a good thing that we’re moving forward, making progress each time out and we’re very excited for the championship to continue from this point.”