Racer comments from Sydney's third round of the year.

A selection of riders detail their day at Sydney Motorsport Park third round of the 2016 Yamaha Motor Finance Australian Superbike Championship presented by Motul Pirelli. Team and privateer competitors can submit comments to [email protected] prior to the Wednesday after events for inclusion in the post-event Quotebook feature. 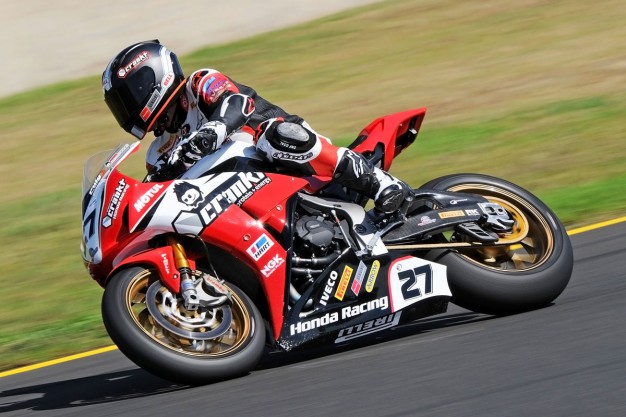 Troy Herfoss (Crankt Protein Honda Racing) – 5th overall:
It was a tough weekend for us, we all worked exceptionally hard but we fell a bit short pace wise, and although we made some good progression as the weekend went on, the outright pace just wasn’t there. I’m thankful for the guys here at Crankt Protein Honda Racing because they put in a lot of effort. We tried a lot of things and it was quite frustrating for them, but we just couldn’t get those extra tenths of a second. I’ve been told that I’m only around seven or eight points off the championship lead, so it’s not dire straights and we’re still well and truly in the game. We’re going to work hard, and go to the next round in Perth making sure that we’re ready to race from lap one in practice.

Jamie Stauffer (Crankt Protein Honda Racing) – 4th overall:
It was my first ride back since I injured my back and it wasn’t a great weekend for me, but I’m still not back at 100 percent fitness yet. In saying that, it wasn’t a terrible weekend. I didn’t qualify the best, but in race one I was fairly consistent the whole way through. In race two it was wet and we had our first go on the Pirelli wet weather tyres. The fourth place in that race I was pretty happy with. I can’t move around too much on the bike at the moment, but all in all we had a good weekend and hopefully by next round I can come back and be fighting for some wins.

Wayne Maxwell (Yamaha Racing Team) – 1st overall:
I was really enjoyed the weekend, especially race two. I felt very relaxed. The Yamaha R1M was fantastic and working really well. What can I say, you have days where everything just clicks and you have days where it doesn’t. The challenge is anyone can win on a good day, it’s trying to win on a bad day. We proved that at Wakefield Park that we could win on a bad day and today we have proved that we can win on a really good day. I have to say a massive thanks to the whole Yamaha Racing Team and my mechanic, Warren [Monson]. The entire team are working really well together, and the results at the track are really showing. I’m just the guy that gets to take the celebrations. Yes I do my part and I have to give feedback and so on. However without the good people around you and the good product that they supply you, which is the Yamaha R1M, you can’t win races.

Glenn Allerton (Yamaha Racing Team) – 2nd overall:
Second place today was a great result for myself and the Yamaha Racing Team. To get a one-two in both races and the overall is fantastic. I felt like I could have won the first race, however, Wayne was just too good and didn’t make a mistake all race long. The second race was really difficult conditions. It was wet, then it was starting to dry out. Wayne and I were racing at a pretty good pace at the start. During the race I had a few big moments, so I decided to back it down a little bit. Wayne was pushing on, but I knew to consolidate second place was a smarter option.

Cru Halliday (Yamaha Racing Team) – 8th overall:
This weekend wasn’t the best that I have had. We had good dry pace in race one, however in race two I did struggle. I just wasn’t really confident to push in the race. I found myself outside the top ten. By then I knew I couldn’t push any harder, so I just said to myself just stay on and bring the Yamaha R1M home and collect points for the championship. Some days you have bad days and this was one of them.

Mike Jones (DesmoSport Ducati) – 3rd overall:
It was an exceptional weekend for myself and the DesmoSport Ducati team. We made good steps forward with the setting and qualifying third displayed that. To go on and finish both races on the podium was extremely positive. I’ve taken a lot of confidence from this result, it was a nice way to bounce back from the previous round, and more in line with where we were at round one. It was my first time on the Ducati in the wet conditions and it took a while to find my feet, but the bike was relatively easy to ride and the Pirelli tyres were fantastic all weekend long, both in the wet and dry. We’ve moved up a position in the championship from fifth to fourth and that’s great for us, the points gap is pretty steady at this stage and overall we’re doing well. For the second half of the championship we can really focus on this as the foundation and keep moving forward from here.

Brayden Elliott (Suzuki) – 7th overall:
It was a very important weekend for us as a whole team, we have continued to achieve the goals that we set out for ourselves. I’m continually working closely with both Shawn [Giles] and Phil [Tainton] to improve our setups at each and every event. The team are doing an amazing job to make me feel more comfortable on the Knobby Underwear Suzuki GSX-R 1000, focusing high attention on improving my own skills as I continuing to gain experience leading to ongoing good results. The weekend also marked the first time I had ridden in wet weather conditions on the Superbike, so that certainly provided a fantastic learning experience for myself. Also being able to get used to the Pirelli tyre on a wet track which worked very well and certainly gave me plenty of confidence to give it my all. It was unfortunate to be forced off the track in race two but to come back from 18th to finish sixth is a big achievement and was a true test of my determination and hard work. I cant thank my sponsors and supporters enough, in particular those that were able to make it out to the track on the weekend. We have yet another big task ahead of us for the next round at Barbagallo, making the big trek across the Nullarbor to Western Australia but I’m looking forward returning to my personal favourite track that gave me great success in 2015.

Michael Blair (Michael Blair Racing ) – 10th overall:
I was very happy with the performance of the IPONE Yamaha R1 and the Dunlop tyres were working well. In race 1 I didn’t capitalise on the good grid position which was frustrating, keeping the wheel down on the R1 at a start will require more practice, once the front group got away it was hard to get closer. The bike had developed severe chatter which was affecting front and back and the last few laps were difficult, I’d stayed close to the rider in front and improved my position on lap eight, holding out for ninth at the finish. [In race two] to watch the gap to the riders behind diminish and not be able to do anything was extremely frustrating, I couldn’t push harder in the wet conditions and risk a get-off. A positive is that the shock can be fixed and I’ll be ready to race with more experience under my belt. 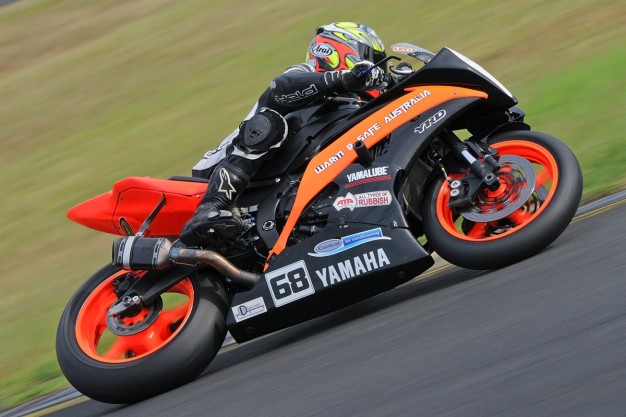 Mitch Levy (Yamaha) – 1st overall:
It’s unreal to finally win a race Supersport race in the ASBK series. We have been trying hard in the last few years so it’s nice to finally have ticked that box now. Race two the front end of the bike was good, but I was just struggling with rear grip. Overall however I’m just stoked to be able to come away with the win for myself and the Landbridge Racing team. Couldn’t have done it without the team and Sam Costanzo from Landbridge Transport.