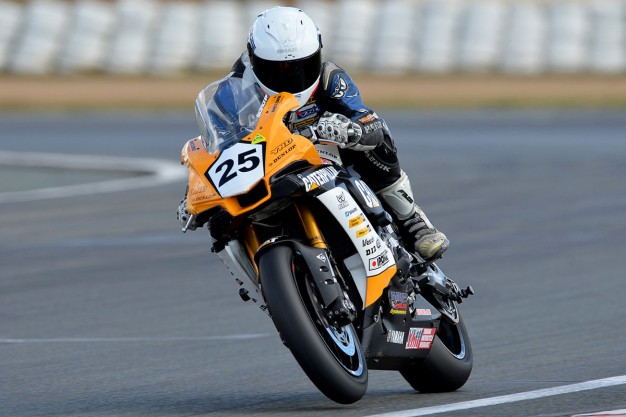 It would have to be winning the 2013 Australian Supersport Championship. Aside from that, racing at the World Superbike event in the ASBK at Phillip Island in front of a big crowd earlier this year. I managed to lead a few laps in front of six factory riders, which was pretty special. We were close towards the front until we had a few mechanical issues towards the end of the race – we showed that we were fast and I believe we can do that again.

Probably the final race of the 2014 Australian Supersport Championship at Phillip Island, where it was half wet, half dry. Some riders chose full wets, some riders chose the treaded tyres and some chose to run one wet and one dry tyre. It was a real gamble for us because we were trying to seal the title and riding on a track which was consistently trying to make me come off the bike was really sketchy. I just had to finish the race in eighth or above position. It was a very difficult race for us, but we managed to finish fourth and take the title.

Hidden Valley. I just have a very good win record at Hidden Valley and we have the Supersport and Superstock lap record there. Just the whole atmosphere up there as well, I think everyone really enjoys when the Superbikes do come back, as it doesn’t happen very often anymore. The track itself is maintained very well, the design and layout is fantastic. I think the ASBK should be back there for sure!

You would probably have to go back to the Supersport days with Aaron Morris. There was no hiding that we were not the best of friends – he wasn’t on my Christmas card list that’s for sure! But nevertheless we had some good battles on the track. The feuds tended to not end on the track either [laughs].

A paramedic. I’m three years into my degree at the moment. If racing doesn’t turn out to what I want it to be, I’ll pursue my career in the medical industry.

It would have to be Valentino Rossi. As much as it would be a standard answer, I’m not just saying that because of his riding abilities, but also because of his whole persona in the pits. It’s very inspiring. If I can be half of what Valentino is, then I would be a very happy person!

No, I don’t really believe in all of that kind of stuff. We have a Chico, like a little black jelly baby, that gets licked and stuck on all of our bikes as a bit of a joke, but I guess you can call that superstitious.

I like to switch it up throughout the year. In summer I do a lot swimming, I believe swimming is the best sort of cardio and all-round body fitness for motorcycle racing. In months around autumn and spring I enjoy doing some cycling and in winter I’ll mainly be in the gym.

Non bike-related hobbies?
Honestly everything I do is bike related, however lately I have been doing a bit of cycling with Liam Wilkinson and that’s a bit of fun! Racing takes up too much time to have any other hobbies, I think most would agree.

I don’t own a car, but I own a motorcycle, which is a Yamaha MT-09. I have a work ute, a Mitsubishi Triton that I use to go to get around in. I mainly use the bike to do my own stuff though.

Really, whatever is just trending, I listen to the radio a lot.

Being able to come home after round and being able to continue my Uni studies, as well as being able to have a life outside of racing. Also the pits is a great place to be around as it’s not too serious, people seem to still be having a good time there.

It’s hard to look pass Jonathan Rea, but I honestly think Chaz Davies will start pulling a few out of the bag. He seems to have the fire in his belly as he is gunning for his first World Superbike title, so I’m going against the odds and putting my money on him.

As much as I would love to see Valentino win it, Jorge Lorenzo is very fast when he has his A-game. I think his consistency is hard to beat. As you can see, I’m a Yamaha boy!

I have webbed toes, which makes me a good swimmer!

I have had heaps of fights! Growing up with an older brother, there will always be a fights [laughs].

Pretty much every ASBK round is a holiday for me. I substitute my leisurely holidays to different countries for our ASBK rounds. I don’t have time to go on holidays, my last holiday was in 2006 when I went to Malta.

Race two at Sydney Motorsport Park at the last round of the ASBK in the wet, when I highsided while in third position. I got a little throttle happy where the track surface changes and just lost a little bit of grip and went over the bars.

Probably more technical tracks, like Hidden Valley. In saying that, I do like a long straight, such as Sydney Motorsport Park and Phillip Island.

McDonalds. Anything is good in moderation [laughs].

Blonde or brunette, it doesn’t really bother me as long as there is no colour.