Superbike and Supersport post-race updates direct from round four.

Follow all the action direct from Barbagallo Raceway’s fourth round of the 2016 Yamaha Motor Finance Australian Superbike Championship presented by Motul Pirelli. CycleOnline.com.au will update this feature directly following each race as they happen throughout the round. 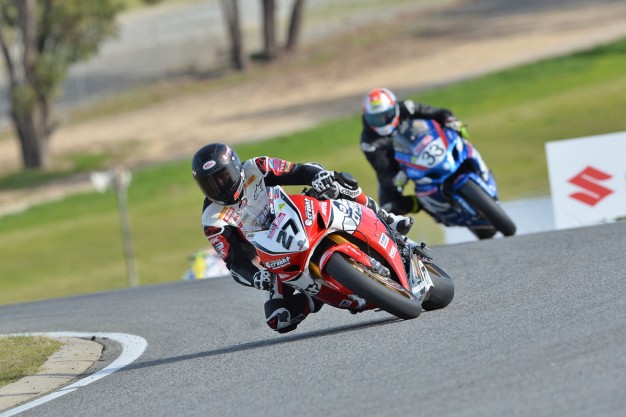 Motul Supersport Race 1:
Pole-setter Sam Clarke (Kawasaki) pleased the Western Australian fans with a controlled opening race victory in the Supersport ranks. Clarke sprinted away from the field in the early laps and maintained that advantage for the 16-lap duration, eventually crossing the line 2.131s ahead of Luke Mitchell (Yamaha) and a further couple of seconds ahead of Troy Guenther (Yamaha). On his way to the win Clarke also took a new lap record with a 57.184s on lap two, beating Jamie Stauffer’s 57.277s from 2006. Rounding out the top five in race one were Callum Spriggs (Kawasaki) and Nic Liminton (Yamaha).

Motul Supersport Race 2:
A frantic second and final Supersport race of the weekend resulted in the same winner, Clarke, however this time out he didn’t have it all his own way. A four-way fight for the race win ensued, with Clarke crossing the line 0.116s ahead of an improved Spriggs, with Mitchell also within half a second in third. Guenther was also in the fight for victory, winding up fourth, while Ted Collins (Next Gen Motorsports Suzuki) finished fifth. Overall it was Clarke who took the win with the clean-sweep, joined on the podium by Mitchell and Spriggs. That resulted in Clarke taking charge of the championship, now 10 points ahead of Guenther and Spriggs still in the hunt in third.

YMI Superbike Race 2:
A calculated second race from Maxwell clinched him the round win aboard the YZF-R1M in WA, overcoming the advancements of teammate Allerton and opening race winner Jones to win by 0.899s after a nail-biting 20 laps. The holeshot once again belonged to Herfoss, before Jones went to the front on lap two. It was then Maxwell who led from the fifth lap and stayed in front from there. Second of the Yamahas Allerton later made his way by Jones for second and that’s how they’d remain. Fourth was another strong showing from Falzon, comfortably ahead of Herfoss, who got the better of Halliday for position in the closing laps. The top 10 was completed by Burke, Stauffer, Matt Walters (Kawasaki) and Elliott. Overall Maxwell won the round from Jones and Allerton, taking over the points lead in the process, now five ahead of Allerton, with Herfoss a further 13 behind.