Racer comments from WA's fourth round of the year.

A selection of riders detail their day at Barbagallo fourth round of the 2016 Yamaha Motor Finance Australian Superbike Championship presented by Motul Pirelli. Team and privateer competitors can submit comments to [email protected] prior to the Wednesday after events for inclusion in the post-event Quotebook feature.

Troy Herfoss (Crankt Protein Honda Racing) – 5th overall:
It was a big weekend for us again – it was a bit of a hard weekend. I’ve been competitive over the last two or three years where I’ve been able to go to every track and say ‘We’re could win this weekend’, but I felt as though I had to adjust my goals a bit in WA. I approached round four as ‘how close can I get to the leaders?’ Because every session we just seemed to be losing time which is hard to accept. The goal for me was to have a time within three or four tenths of a second a lap of the leaders and we did that. I was fourth in the first race and not far off the podium. In race two I didn’t make a mistake, I rode my best, but we just weren’t able to quite match the front guys. I got the best out of myself on the weekend and I can honestly say I made very little mistakes, so I’m looking forward to moving on to Morgan Park – they tell us it’s a Honda track!

Jamie Stauffer (Crankt Protein Honda Racing) – 8th overall:
I felt a lot better on Sunday than what I did on Saturday. I sort of struggled all weekend and I didn’t qualify in the best position. Once racing kicked off though, it was the best thing that could have happened to me, I felt a lot better and I think it’s just about getting my confidence up after coming off my injury. I’ve had plenty of injuries to deal with across my career, but this one has been the most challenging. We know what we need to work on ahead of Morgan Park, so we’ll just focus on the next round and go from there.

Wayne Maxwell (Yamaha Racing Team) – 1st overall:
I couldn’t get a feel for the bike and couldn’t get a direction. I was unable to give my mechanic Warren [Monson] a direction to work in and he couldn’t give me anything back, so it took a while to get that going. We just went back to basics and went up and down with the bike and in the end we made the right decision and it paid off. To come out in race two and get the win and secure the championship lead is a great feeling. When I went to the lead, I didn’t really want to lead that early on because I know how physical it is out there. When I got to the lead it kept saying +0 ‘MJ’, then ‘GA’ and I thought to myself ‘would someone give me a break?’. I kept the pressure on and lucky enough we came out on top. I have to say a massive thanks to my mechanic Warren and the entire Yamaha Racing Team for the effort they have done this weekend.

Glenn Allerton (Yamaha Racing Team) – 3rd overall:
I showed that I had the speed to run at the front after race two. In the heat of the battle, Wayne did a great job and won race two. I threw everything I had at him, so you can’t take it away from him. I just have to keep working hard, as the harder you work the luckier you get, so that’s what I’m going to keep on doing and move onto Morgan Park and do the best I can to win there.

Cru Halliday (Yamaha Racing Team) – 6th overall:
The Yamaha R1M was handling so well out there in race two. I did have a little bit of tyre wear mid-race, but it did come back towards the end of the race. I made a small mistake while fighting against Troy, but these things happen and it’s racing. I just have to take the good with the bad and head off to Morgan Park now and try and get a good result there.

Mike Jones (DesmoSport Ducati) – 2nd overall:
It’s been a fantastic weekend for myself and the DesmoSport Ducati team,.To get the Pirelli Superpole yesterday was really important and to get the first race win was a great result. I’m really pleased to reward the team’s efforts. It was good to control race one from the front under pressure, a really, really cool feeling. In the second race I made a much better start, tried to push early, but the other guys were obviously very fast as well. Anyway, to finish on the podium and take second overall was a great way to cap off the weekend!

Brayden Elliott (Suzuki) – 9th overall:
The fourth round of the Australian Superbike Championship proved to be another positive event which has again seen me learn and grow in the Superbike category. From start to finish, the whole team did an amazing job working together to achieve a good set up and strong performance from the Knobby Underwear Suzuki GSX-R 1000 machines. It was a huge benefit to continue learning from both Shawn [Giles] and Phil [Tainton], who assisted in many areas, both of whom have a lot of racing experience and success at the Barbagallo circuit. Not only with on-track information, Phil and Shawn have assisted in so many areas off the bike, passing on their experience and knowledge to help me put the pieces together. We are certainly ticking the boxes and making steps forward, especially within myself over race distance, however I still need to work on improvements in certain aspects of racecraft, which is certainly coming from the experience I gain at each round. I am happy to take away a lot of positives from the event and also happy that I am able to know definite areas of improvement which I can now work hard and focus on ahead of the next round. Thank you to my family for driving the long journey to Western Australia, also to everyone behind the scenes that make this possible, as well as the huge Perth crowd for supporting a great event. 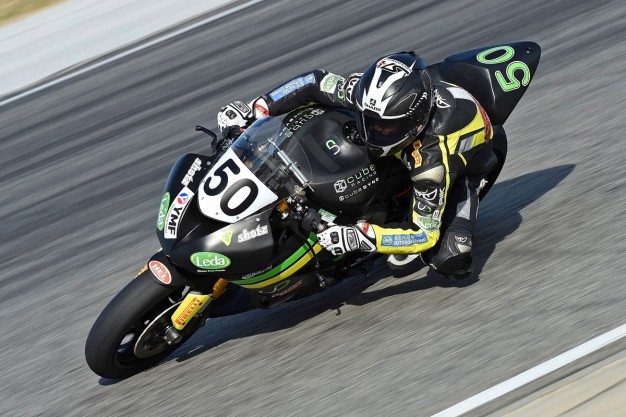 Callum Spriggs (Cube Racing) – 3rd overall:
At the start of the weekend I wasn’t feeling 100 percent and struggled to go faster. I got stuck at a wall in terms of lap times and struggled to go faster, but we came good in the races. The second race was even better again. It was good to fight for the win, we came up a little bit short, but I am happy with how the weekend finished. Hopefully we can get a win at Morgan Park and be right there for the championship, because that would definitely help.

Robbie Menzies (Cube Racing) – 15th overall:
We had a pretty good weekend and improved every time we went out. Every time I was on track we moved forward, which was good. My fastest time came in the last race. Unfortunately I didn’t finish that one, but that’s okay – we will move onto the next round in Queensland.

Luke Mitchell (Yamaha) – 2nd overall:
Overall it was a good weekend. Second outright is a good result after round three when I crashed out in the wet. We’ll try and keep this momentum rolling for Morgan Park. I know the Morgan Park layout very well so I expect it to be a good round for me.

Troy Guenther (Yamaha) – 4th overall:
Overall I’m happy with the pace that we were able to achieve. I had crack and felt we had the pace to win the second race, however I left the door right open in the last few laps which cost me my chance to fight for the win.