I’ve been a fan of Suzuki’s DR-Z400 in all its guises ever since it was first released 15 years ago. Released as the DR-Z400E enduro machine, Suzuki faced some pretty stiff competition in the form of Honda’s XR400. Well, to be honest the XR ruled the Aussie bush. In 400 and 650cc formats, there was nothing the XR couldn’t do wining Australian Safaris, enduro competitions and, thanks to its reliability, was often the choice for tour operators and weekend warriors. 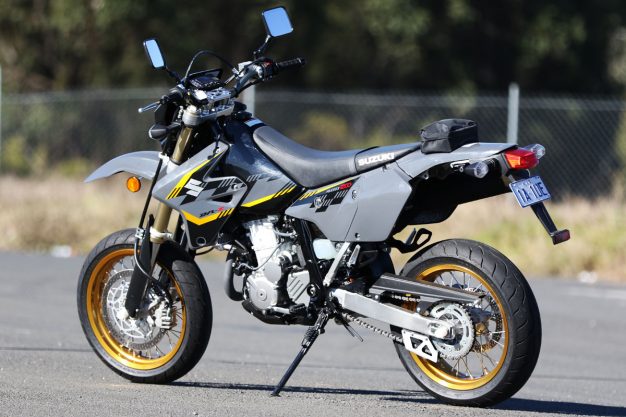 Honda’s focus in the off-road world changed to the CRF in the 2000s – a competition spec engine and chassis derived from the motocross line. The DR-Z soldiered on and, on the back of an equally impressive reputation for reliability, became Australia’s most popular off-roader. 15 years on and relatively unchanged, it ss still the most popular off-road machine in Australia. Aussie’s want big distance reliability, capability in varied terrain and the DR-Z400E delivers.

In creating a solid workhorse, the DR-Z400E had a lot of untapped potential and as such was the perfect starting point for creating anything from a desert dueller to a slick-tyre shod motard racer. Just like Suzuki did with the new Hayabusa in 2008, the Japanese brand saw a trend of riders modifying their bikes and made the production bike to suit. No, they didn’t ditch the off-road workhorse but instead added to the model line-up by building the DR-Z400SM featuring 17-inch wheels, big brakes, swingarm derived from the RM-Z motocrossers and a set of upside down forks.

As far as mod cons go, the DR-Z400SM is as raw as they come. There’s no traction control, no ABS, mode selectors or any of that stuff. It’s the absence of these things that makes it easy for any bush mechanic to work on in trailbike form and as a motard it gives the SM more of a raw and pure feeling on the road. Sure, a competition-spec 450 is going to give you more of a wild ride, but riders learning the ropes have the perfect tool to hone their skills aboard. 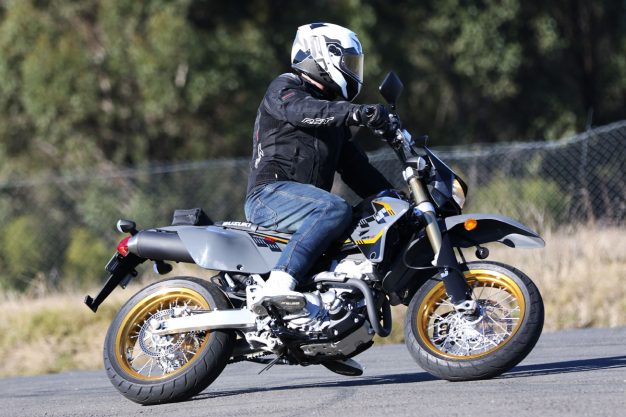 Power isn’t brutal in its delivery from the 398cc single and it’ll fire you from a standstill quickly. With 32kW and 33Nm on tap you need to keep the revs up and work the gearbox to move with good pace though. It’s not mind-blowing performance but given a tight and twisty road, combined with the DR-Zs light, nimble and planted handling, you have a machine that’ll easily keep with bigger, faster, sportier machines. The DR-Z400 SM proves that you don’t need a whole heap of power to have fun.

Handling is the strongest aspect of the DR-Z400SM. Both ends are built by Showa and at the front the 47mm upside-down forks have adjustable compression and rebound damping while at the rear there is adjustable high- and low-speed compression damping, rebound and spring preload. You don’t often get that level of adjustment on a learner bike, or a bike around the 10 grand mark, and, along with the under stressed engine, is another factor that shows that the DR-Z has a whole lot more waiting to be unleashed within.

As far as niceties go, the DR-Z is a no nonsense machine. It has a tool pouch and comprehensive digital dash with two tripmeters that can be vital in working out fuel range as there is no fuel gauge. The bodywork has a great shine to it that makes you think the plastics are painted. The componentry while it isn’t blingy, is all quality kit and good attention to detail has been paid right across the bike. It’s a great looking machine and while it may be learner legal, it won’t look out of place next to the likes of KTM and Husqvarnas big-bore, competition-spec machines. 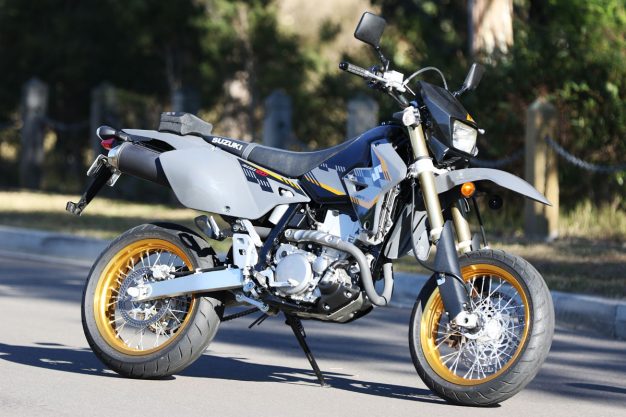 If you are looking for a learner approved motard, this is it: the DR-Z has no competition in its class. At $10k rideaway, there’s a lot to like about the DR-Z for both learners and experienced riders. The DR-Z is an attractive option for riders looking to head bush on weekends, but not after expensive 20 hour services that come with competition spec machines. The SM is equally appealing to learners and experienced road riders for the competent handling and strong performance it delivers.

As a commuter, it’ll make for a fun, easy, economical and reliable machine. With a bit of engine and chassis work you’ll have a street sleeper that’ll keep any bike honest on a tight piece of road. Most of all, as a machine to start out on it’s rock-solid handling, good performance, and bucket loads of character make it a great machine to learn to ride on.