If there’s one style of motorcycle that Moto Guzzi does very well, it’s cruisers. Go back in time to the early 1970s and Moto Guzzi built its California for the Los Angeles Highway patrol. Fast off the line, quick over a quarter mile, able to carry big loads while all the time providing great handling, it set the benchmark for performance characteristics that is now the modern day ‘roadster’ sub-class.

Typically lighter, better handling, with more ground clearance and lively engine than other cruisers, this style of machine has all the elegance and relaxed feel of a cruiser, but is a lot more fun in the corners. This style of machine is one that Moto Guzzi has always produced and its California, especially, is still the very essence of that style of machine. True to form, it’s the handling that is a strong point of the new V9 Roamer. 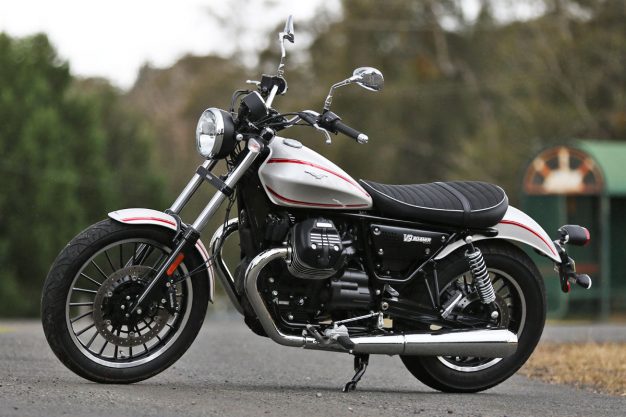 Before the new V9 Roamer, Moto Guzzi produced the Nevada 750. While the engine wasn’t ridiculously powerful, it had great torque, light and nimble handling and was a smooth and comfortable ride. It was the perfect powerplant for what was effectively an entry-level cruiser. That same engine is what evolved to power the new V7 range and its that same engine Moto Guzzi has evolved to power the new V9 range of cruisers – the Bobber and the Roamer.

The Roamer differs from the Bobber in the chassis with the Roamer carrying a 19-inch front wheel – from the Bobbers 16-inch – and subsequently longer trail. Admittedly, I do prefer the Bobber’s style with the big, fat, front wheel and not to mention the acres of black, but the light and easy characteristics of the 19-inch front is something that makes the Roamer such a pleasure to ride. In a lot of ways it reminded me of the handling of the Nevada that I last rode 21 years ago! 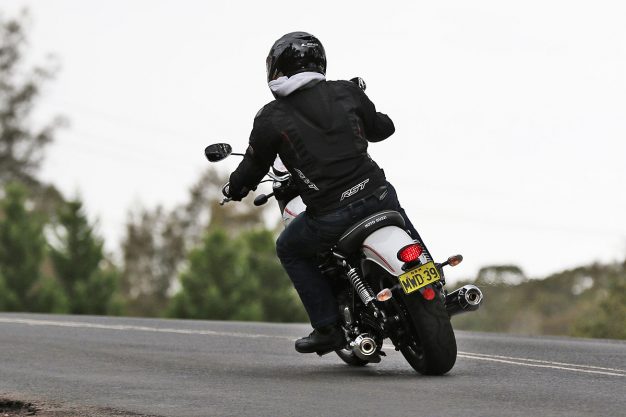 The suspension is simple: there are forks up front and twin shocks at the rear. You can adjust the preload at the back for pillions and luggage, but that’s all you will need. The balance of the Roamer is on the firmer side for a cruiser and softer side for a nakedbike, but like the bike’s style it is halfway in between. The handling dynamic plays out like a sporty, comfortable, capable roadbike and there’s no aspect of its handling that falls short.

There is very good ground clearance, it is planted and rarely disturbed by bumps and groves and if ever anything happens there’s traction control to back you up. You will occasionally need it with the V9 engine’s hard-hitting power at low rpm, especially on wet and sketchy roads or even hard under power on crappy, corrugated roads. The brakes are sharp and powerful and the ABS is smooth in its actuation. In so many ways this is the cruiser you ride when you’re not riding a cruiser! 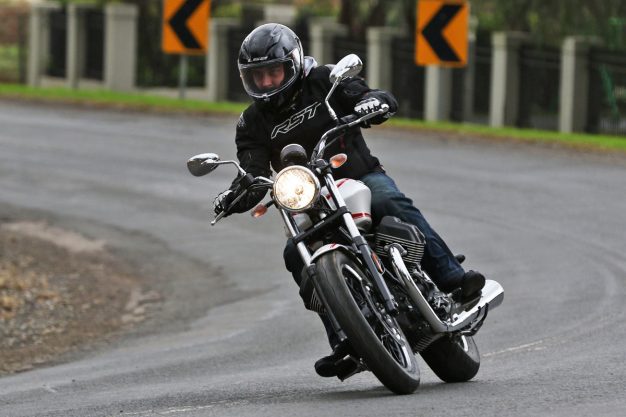 Same too needs to be said of the engine. If you know your Guzzis, you’ll be well aware that the 850cc capacity transverse twin is a legendary engine format featuring in models like the Le Mans, Eldorado, California and T3 from the 1970s. A long way evolved from those machines, Guzzi has taken the 744cc V7 engine and grown it to 853cc via a longer bore and stroke. Detail changes in the lower half of the engine include a stiffer crankcase, revised lubrication, cooling and ventilation, new oil pan and oil pump, and an inertia calibrated crankshaft for better engine braking.

In the top-end, valves are still pushrod operated but they are now set at an incline in the head and are no longer parallel. A single Marelli injector body takes care of the fuelling, while the six-speed gearbox is new and so too is the clutch that is bigger to deal with the extra oomph from the engine. Getting the new engine’s power out is a bigger shaft drive – running through a new swingarm – that runs two universal joints for a smoother operation. 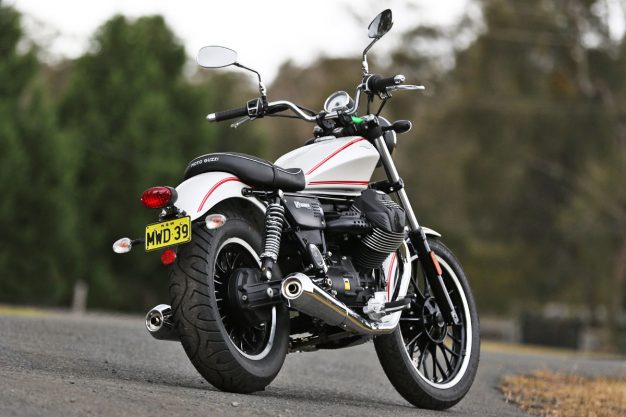 A majority of these changes are aimed at making the transverse V-twin Euro4 compliant and doing so is testament to how important the small capacity air-cooled engine is to Moto Guzzi. While other manufacturers have dropped machines from their line-ups, Guzzi has instead made the 52 year-old format more refined, better performing and more economical than ever. It’s iconic and individual and a point of difference from the hordes of other cruisers solely for the way it looks. When it comes to the finer details, the V9 excels. The paint is deep, luscious and beautifully finished. Weldings are flawless, as too are castings of the large crankcase unit.

Priced at $16,500 rideaway, there is value in the end product in both performance and product. Yes, it’s priced a bit higher than other 900cc-ish cruisers, but they will struggle to have the handling capability or class the Guzzi does on the road, and won’t have a chance parked next to it. As always, Moto Guzzi hasn’t failed to produce a product that conforms and adheres to so many of the demands of the modern motorcyclist, yet is so individual in the way it does such a great job.