If you have bought a new entry-level sportsbike, or any sportsbike for that matter, over the past three years, you aren’t alone if it was a Honda CBR500R. For so many reasons it is hard to look past the CBR500R – it’s an ideal machine to learn on with easy handling, predictable power and excellent economy. What’s more is that the machine’s capabilities are so much more than what a learner needs.

This is a bike riders will keep when they have their full licence and it’s also a machine that experienced riders will enjoy to ride with plenty of performance and excitement. The success of the CBR500R shows in the numbers too: a top ten seller in its first year, it was runner up to the best-selling Ninja 300 in 2015, and is selling better than every superbike and supersport on the Australian market this year. 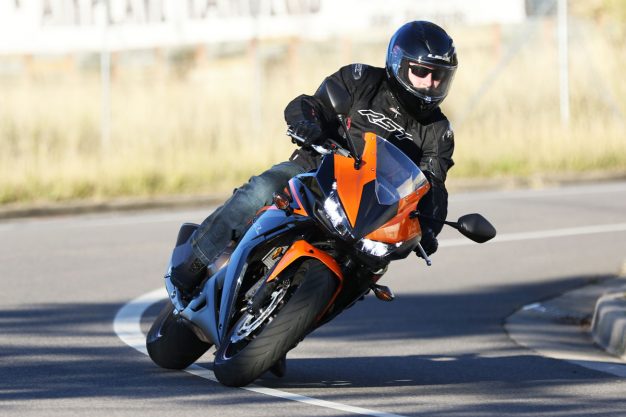 The most obvious change to the 2016 CBR500R is the new styling. While 300s tend to get the looks of their superbike siblings, the Honda 500s previously had a more conservative approach to their design. The CBR500R got its looks from the VFR but now the 500R has very similar lines to the CBR600RR. The new tailpiece, tank, sidecovers and fairing have a much more modern shape and the graphics are racier with an orange, black, white and red colour variant available.

The reshaped fairing means there is less of the engine exposed and the exhaust pipe is a shorter, stubbier low-slung unit. Close your eyes though and the CBR500R feels like exactly the same bike even though the tank is a litre bigger and seat reshaped. The footpegs are smaller – but you wouldn’t know it either and they gave my size 12s plenty of space to work off. The new LED headlight not only looks but works better delivering a good spread of sharp, white light on the road at night.

I complained about the previous model not having a hinged tank cap. It might seem like a niggly thing to point out, and something the you easily forgive, but for such a convenient and practical motorcycle you expect this sort of detail to be better. It is now and so to is the wave-style ignition key that is going to be more secure and durable. 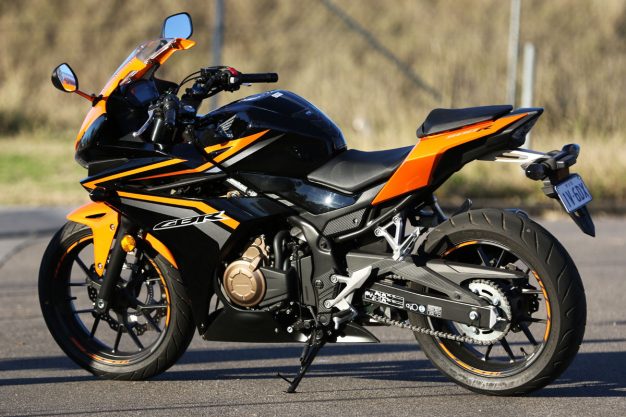 The engine pulls strong from idle and gives a smooth delivery of power right through the rev range. The 180-degree crank ,coupled with a counter-balancer, quells vibrations and the power characteristics make for an easy ride. There are no peaks or troughs, just a constant build up of forces as you screw the throttle. At freeway speed, the tacho sits around 5000rpm and the ride is velvety smooth.

The engine and pipe are super quiet too, except when you get it revving towards redline. The engine gives good response to about 130km/h, but after that it takes a while for the speed to increase with any urgency. The parallel-twin engine has good economy on the road. Fuel consumption ranged from 3L/100km around town to 6L/100km when ridden like the CBR600RR it looks like. With a 16.7 litre tank capacity that’s an easy 400km range if you want.

The shift-drum mechanism in the gearbox is the only internal change on the CBR500R and redesigned along the lines of the one in the bigger CBRs to improve gear changes. It softens up changes with less throw of the foot required to grab another gear as well. Like all the other updates, it is a small thing but they all add up to a significantly improved machine to ride as a result. 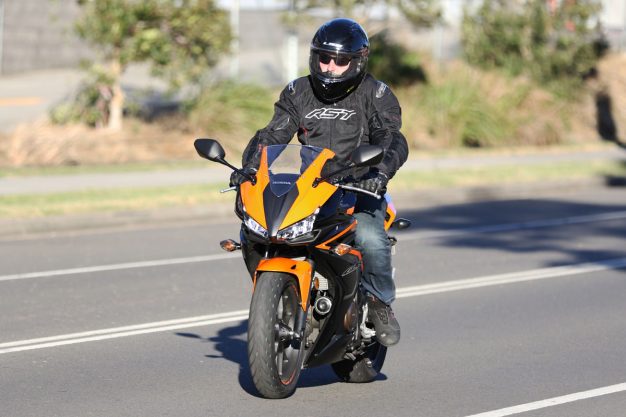 The chassis specification is basic: the frame is a welded one-piece unit made of 35mm tubing. Up front is a 41mm telescopic front fork, now with preload adjustment, and a nine-step preload adjustable shock at the rear. The brakes, by Nissin, are a two-spot caliper on 320mm disc up front and 240mm disc with single-piston caliper at the rear and are equipped with ABS.

The geometry is a relaxed 25-degree rake and 102mm trail, while weighing in at 194kg wet it is on the hefty side of the scale for a learner bike. But it holds its weight low and you don’t feel that bulk when pushing it around or out on the road. The 785mm seat height sounds high, but the narrowness of the bike make it a short as possible reach to the ground.

The handling is agile and sharp. The suspension, though basic in spec, is a great balance for round town riding and fast open roads. At 90kg I had no need to dial in preload that is now available at both ends. Two up it isn’t challenged by average sized passengers and pillions will miss the big grab rails the old styled machine had. 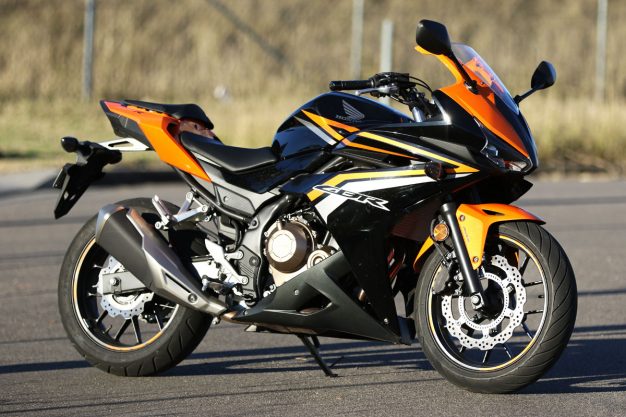 The brakes have great power and excellent feel and unlike the machine I rode last year – a 2014 model before ABS became standard in 2015 – are a great safety feature that is becoming an expected standard on motorcycles these days, no matter what the price point. The addition of span adjustable levers – my other complaint from last year – is another noteworthy improvement.

With all of these improvements, the 2016 CBR500R has gone up $100 in price. For $8099, with free on roads until the end of August, you get a lot of motorcycle that will serve a learner rider as well as it will a commuter. The CBR deliver performance and handling to excite, and now the looks to do the same too.