Back when the factory team returned to the MotoGP field.

With KTM confirming it will use this year’s Valencia final round of the MotoGP World Championship as a vital test prior to entering the series fulltime in 2017, it’s only natural to think back to when Team Suzuki made a very similar move in 2014.

Suzuki had chosen to ‘temporarily suspend’ its grand prix racing program at the end of 2011 before opting back in for 2015, however the 2014 season was used as a developmental stage, much the same as KTM has done this year. And fittingly, Valencia provided an ideal opportunity under race conditions before the fulltime comeback.

Then 33-year-old Frenchman Randy De Puniet – test rider for Suzuki – qualified 20th on the grid with a time just under two seconds off of Valentino Rossi’s pole lap, however he was forced out of the race after just 12 laps due to a technical glitch while running inside the top 20.

“We knew it would not be an easy weekend, but I did not expect to run into these problems,” a dejected De Puniet said. “Everyone in the team tried their best, but it was not sufficient to finish as I struggled with a gearbox shifting problem. 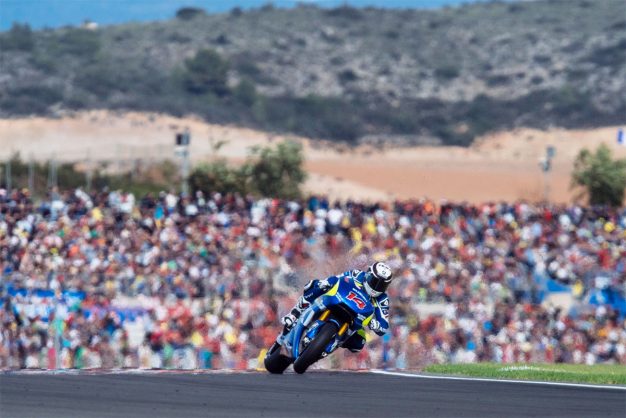 “It is a shame because in these race conditions I might have been able to push for a good position. I think I did a good job for Suzuki during the year and I’m interested to see and hear the feedback of the new riders now.”

Team manager Davide Brivio was also disappointed with the outcome following the race day, however it was another important step in Suzuki’s return to the most elite level of motorcycle racing worldwide.

“We faced some technical issues this weekend, some of which we have not encountered during the testing campaign,” Brivio recalled at the time. “From this point of view it was a good decision to race here and learn more for our job over the winter. In terms of performance – and with everything considered – things are not so bad.

“We know we have to improve the engine and electronics and we are already working. Now we can add the information from this weekend. Despite everything, it was good to race at Valencia and make these discoveries now. We will test this week, we won’t find big solutions in the space of one day, so we will have to try and manage.” 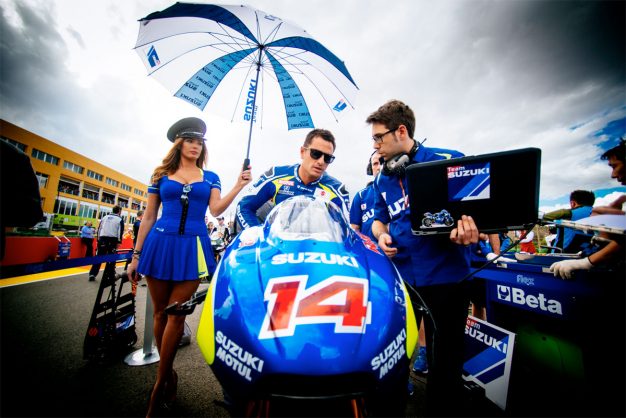 Satoru Terada, Team Suzuki MotoGP director, admitted it was a difficult beginning of what’s ended up being a largely successful project: “It was quite a tough weekend for the team. We’d been having some technical problems recently and we couldn’t find a sufficient solution, so it was difficult from the start of the meeting.

“We feel sorry for Randy as he made such a big effort in the last two years with the development process and we really appreciate him giving his best in this final race of the season. Today was actually our first race after three years and we learned a lot, especially about what we are missing.”

Once newly-signed factory racers Aleix Espargaro and Maverick Vinales climbed aboard the GSX-RR during the annual post-race tests at Valencia, lap times plummeted dramatically for Espargaro, paving the way for what’s been a solid two seasons for Suzuki. And come 2017, they’ll have an all-new line-up again with Andrea Iannone and Alex Rins.

Ironically, while it’ll almost certainly be Finnish test rider Mika Kallio who will debut the KTM Factory Racing entry at in Spain under race conditions this year, before Pol Espargaro and Bradley Smith take the helm, De Puniet has also played a part in the early development of the RC16.