Superbike and Supersport post-race updates from round five.

Follow all the action direct from Morgan Park Raceway’s fifth round of the 2016 Yamaha Motor Finance Australian Superbike Championship presented by Motul Pirelli. CycleOnline.com.au will update this feature directly following each race as they happen throughout the round. 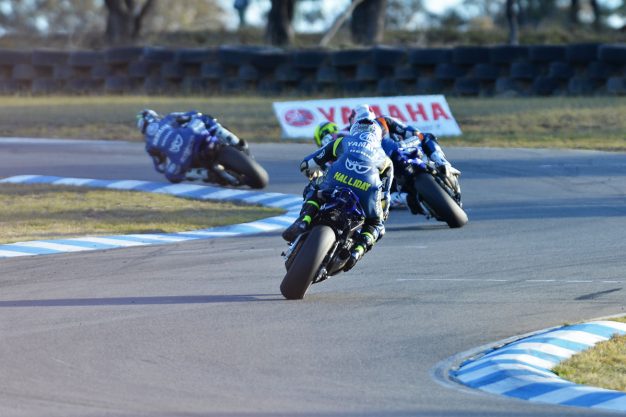 Motul Supersport Race 1:
Yamaha-supported Luke Mitchell won the opening Supersport race of the round in Queensland, getting the better of Sam Clarke (Kawasaki) on the final lap to take a 0.600s victory at the duration of 15 laps. Clarke led most of the laps, however it was pole-setter Mitchell who stormed to the win, with Clarke runner-up and a fast-finishing Chris Quinn (Yamaha) completing the podium. Fourth was Troy Guenther (Yamaha), comfortably ahead of Lachlan Epis (Kawasaki) in his ASBK debut, while Ted Collins (Suzuki), Mark Chiodo (Triumph), Robbie Menzies (Kawasaki), Nic Liminton (Yamaha) and Ben Blyth (Yamaha) filled the top 10 placings. It was a difficult opening leg for Callum Spriggs (Kawasaki), pinged with a jump-start penalty before ultimately crashing out at turn 10 on lap nine.

YMI Superbike Race 1:
Crankt Protein Honda Racing’s Troy Herfoss has stormed to the opening Superbike race win at Morgan Park this afternoon, leading from the outset and stretching away to a dominant 3.748s victory. He also claimed a new lap record of 1m14.488s on lap six. From pole position Herfoss pulled a comfortable lead of over five seconds and controlled the 19 laps from there, winning ahead of title leader Wayne Maxwell (Yamaha Racing Team) and impressive privateer Daniel Falzon (JD Racing Yamaha). Fourth was Yamaha’s Glenn Allerton, who ran as high as third in the race after charging from seventh on the grid, trailed by Jamie Stauffer on the second of the Hondas. The top 10 was filled by Brayden Elliott (Knobby Underwear Suzuki), Sloan Frost (Next Gen Suzuki), Brenton Hyde (Honda), Ryan Yanko (Honda) and Adam Senior (Yamaha). Cru Halliday (Yamaha Racing Team) and Ryan Hampton (Next Gen Suzuki) were both non-finishers during the mid-stages. Meanwhile an electrical issue put DesmoSport Ducati’s Mike Jones out of the race before it even began, the team scrambling to identify the problem that’s plagued them throughout the weekend on both bikes prior to the start of race two.

Motul Supersport Race 2:
Race two of the Supersport ranks, after one red flag incident involving Quinn, saw Guenther strike back for a 2.874s victory over 14 laps, beating home Clarke and the impressive young Epis, who held down second and challenged for the lead in the opening stages. Behind the podium trio it was opening race winner Mitchell who finished fourth, comfortably ahead of Collins in fifth. Positions six through 10 were filled by Menzies, Chiodo, Blyth, Anthony Quinn and Liminton. Overall Mitchell hung on for the round win, ahead of Guenther and Clarke. In the championship standings with one round remaining Clarke leads by eight points from Guenther and Mitchell, another 14 in arrears.

YMI Superbike Race 2:
With another brilliant victory in race two of the Queensland weekend, Herfoss kept his ASBK title hopes alive heading into Winton’s final round. A lightning fast start to the 19-lap affair saw him pull 1.8s on the opening lap and then he was never headed from there, once again stretching to a lead of over five seconds in the early laps and maintaining it from there – his eventual winning margin at 3.202s. He also lowered his own lap record to 1m14.301s . Herfoss led Maxwell and a resurgent Halliday, who held teammate Allerton at bay for the final place on the race podium. Falzon was close behind in fifth, followed by Stauffer, Elliott despite a jump-start penalty, Hampton, Frost and Hyde. Jones was once again out of the running on the warm-up lap, the team unable to rectify the electrical issues that has halted their round altogether. Overall Herfoss won from title challengers Maxwell and Allerton, as Maxwell now leads Herfoss by seven heading into Winton and Allerton a further four behind.