LCR Honda’s Cal Crutchlow captured his second grand prix victory at Phillip Island’s 16th round of the 2016 MotoGP World Championship in Australia last weekend. With rain proceeding the dampen the weekend in its early stages, dry conditions greeted the picturesque circuit on race day which saw the British rider outclass the field. We’ve transcribed his comments from the post-race press conference for this special edition of Race Recap. 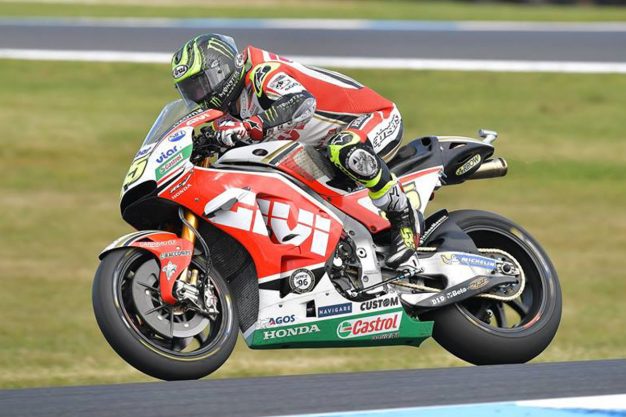 Yeah, obviously I’m really pleased to come here and race in the conditions that we raced in over the weekend. It was about keeping your head over the weekend and making a good job of the situation, because sometimes over the weekend the situation was dangerous. There were some long periods of time not riding the bike, so I had to stay strong. I felt my pace in the race was good – it was better than the other years – for 20-odd laps, which was strange because we didn’t ride most of the weekend in the dry, it was really this morning that was the only dry session. I was pleased to be able to take advantage when I needed to take advantage. First of all, I must say thank you to my team – they did a really good job this weekend, and thanks to Honda because we have great support from them internally – we’re working close with them. We have to look forward to Malaysia now, I’m disappointed my two girls weren’t here to see me [win] again, but luckily they’re on the flight now to Malaysia. When they get off the flight in a couple of hours they’ll know that I won – I get to see them tomorrow morning.

You saw Marc [Marquez] go down at the dreaded turn four that you probably called it, you must’ve thought ‘yeah, we’re going to have to be a bit careful here’…

If Marc crashed in turn six, I wouldn’t of thought anything of it. I crashed [at turn four] two years ago with four seconds to Valentino [Rossi] and about 10 seconds behind me on the last lap. He crashed on about lap nine and I spent the rest of the race thinking it was a disaster. I honestly didn’t brake so much into it, I didn’t gain anytime, I just took it quite easy. I know it sounds really strange, I pushed in the laps when the sun wasn’t out because I knew I needed to keep the heat in the front tyre. When the sun was out, I took it a little easier as such – I felt I was in a rhythm, so I continued in a rhythm. I saw the pit board, and it said 1.2s Vale, but I didn’t see it the lap before, so I thought please no, he’s not coming from P15 and catching me. It started to go up a little bit and I started to ride comfortably, but this is even worse I think, when it starts to go up, you don’t know what to do because you want to push still, but if you don’t push enough you’ll crash with these front tyres. I have to say Michelin did a good job, I don’t think it was so much to do with the tyre – we knew it was critical but it was our own choice to go with the hard front tyre. Maverick [Vinales] and I finished the race, and it also depends on the way you ride, but yeah, I had some flashbacks from a couple of years ago there’s no doubt about that.

Your second grand prix win and in many ways that second win is crucial in the same season.

There’s no doubt it’s a good moment in my career – I said that three or four races ago, so it seems to be getting better which is good. I targeted a few races this year, honestly, I said I wanted to do a good job and be on the podium in Brno, I said I wanted to be on the podium at Silverstone and I was, I targeted here to win, and I did. I’ve had really good year, someone asked me last week what I thought about going to Phillip Island, and I think they’re probably in the room, and I said that I plan to come and win – I don’t think they believed me, but honestly I did, I planned to come here and do a good job. It’s nice to win one in the wet and one in the dry, because people think you can only ride in the rain when you win in the rain as well, we did a good job – there’s no doubt about that. I have to thank my team and the small group of people I have around me.