The 2017 model GSX-R1000 has been a long time coming. Shunted from a four-year update cycle thanks to the affects of the GFC, the 2009 model GSX-R1000 was the last all-new generation superbike we had seen from Hamamatsu. In that time chassis and engine design have come a long way and as these aren’t things you change between model updates the GSX-R1000 fell behind the competition. Electronics are three generations along since 2009 too and are now something every rider seeks or requires on the track and road. But the wait has been worth it – aside from the same footpeg design, everything on this new generation machine is different.

Starting at the engine, Suzuki has made a broad spread of power the core focus of its characteristics. To get that that have made a shorter stroke engine, given it a higher compression ratio, a finger follower valve train system, variable valve timing, ride-by-wire throttle and exhaust valve. Not one but all of these things add up to an engine that delivers a broad spread of power with the engine now revving out to 14,500rpm to put out an extra 12kW and 1Nm. This massive jump in power has easily put the new GSX-R ahead of what every other manufacturer claims their four-cylinder superbike delivers.

The biggest challenge for Suzuki with this new engine was making useable performance right the way through the rev range whilst achieving the increase of top-end performance. To achieve that, the Variable Valve Timing (VVT) system was key. “The VVT is compact, lightweight, simple, reliable and seamless in its operation,” said chief engineer Shinichi Sahara. “It is the exactly the same system that is used on the Suzuki GSX-RR MotoGP machine. It accounts for an 8 degree rotation in operation at the camshaft and 4 degrees at the crankshaft. Through having lighter moving parts it means a higher maximum rpm and the ability to achieve more power.” 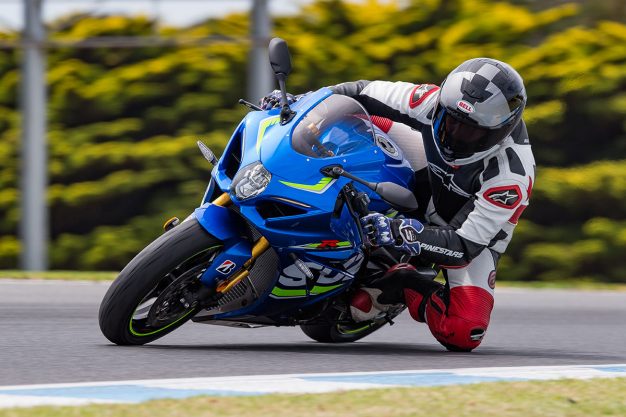 “The requirements that were set for us to achieve with the GSX-R engine were a really high level,” said engine project leader Eiji Sasaki. “The VVT system allows us to have great power at midrange rpm and great power at high rpm. Together with the exhaust valve tuning system which opens up channels in the header pipes at high revs, it allows us to also have greater power at low rpm. We are not sacrificing low and midrange performance for high power or top-end performance for better low and midrange performance. Sportsbikes need low through to high rpm performance and the VVT system allows it to happen.”

Although it is a technology Suzuki is familiar with, taking its final form for the GSX-R has taken a good amount of time. “The system took the same length of time on its own as a new bike to develop,” said Sasaki. “We started with an idea of what we wanted to achieve in terms of engine performance and came to the conclusion that VVT was the way to get that.” One key part of the design of the system has been just how fluidly it operates. Out on track it only gave a hint that it was coming into effect and is proven to deliver with a few of the racers at the launch seeing over 280km/h on the Island’s front straight early in the day on a stock bike.

The VVT system kicks in at 10,000rpm and from here the engine does spin more freely and rushes to the top-end of the rev range a lot quicker than the previous model. Where the engine is at its strongest in my opinion – and has always been as such with the GSX-R1000 – is in its torque delivery. A gear too high won’t be as much of a problem as can be on other big sportsbikes and this should doubly make for a formidable characteristic on the road. It has launch control – and Suzuki demonstrated how that works – while an up-and-down quickshifter does take a bit of getting used to going down through the gearbox. It can’t be faulted for how seamless it makes each and every gear change and I reckon it’ll be a great benefit to many riders on the track and road. 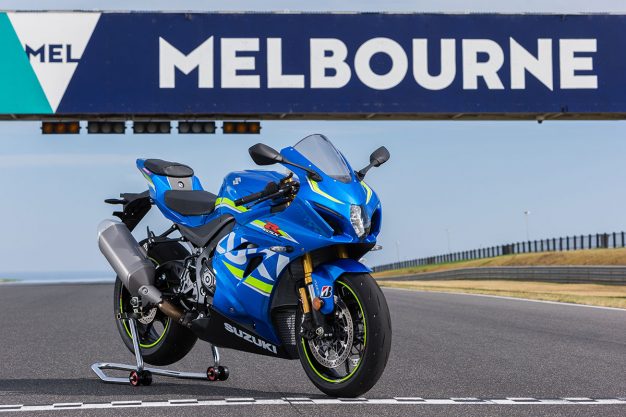 The new engine now revs higher and is also free of a balance shaft – something that’s only really noticeable at high engine speeds. On-off throttle transition is smooth and power comes on strong as you like. Where you get the most of the torque is at 10,000rpm – right at the point the VVT kicks-in a helps you get the revs to high speed quicker. All the while there is a long strong pull through to redline, the engine is always super easy to use and modulate without relying on the new electronics package to jump in and help out. Most of the top level racers at the launch had traction control and ABS dialled right out and put in some impressive lap times so it works just as well with talent onboard.

With every new bike these days comes new electronics and the GSX-R is no different. Along with the Fireblade, until this year both machines were a generation behind in terms of electronics. The new GSX-R1000R gets it all, while later down the track we will see the base model GSX-R1000 without a few bells and whistles. Central to the system is the new ride-by-wire fuelling set-up that has 46mm throttle bodies. Controlled by a new management system, and inertial measurement unit and teamed with a bunch of new sensors – like wheels, throttle, gear, crank, throttle valve – it intervenes in the form of ABS and traction control to make a comprehensive electronics suite that is ideally suited to the GSX-R.

“The IMU is a Continental system developed specifically for the GSX-R1000,” said electronics designer Yutaro Kobayashi. After rolling it out on bikes like the GSX-S1000 and V-Strom 1000 with great success already, what was the biggest challenge in making it work on the GSX-R? “Electronics on a bike can sometimes not translate well to what a rider is feeling. When traction control is working with the throttle wide open sometimes it will slide, stop, slide, stop. That’s not what you want to feel. The hardest part is filling in the gap between the slide and the stop so the system has a very smooth feeling, very linear. Making the system so you can’t feel if it is working is the most difficult part.” 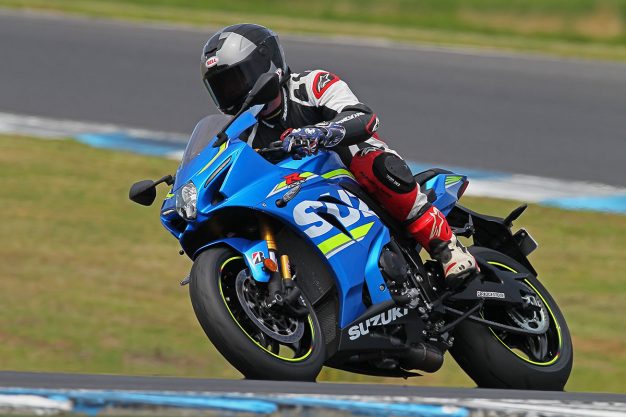 Overlying the traction control is the drive modes which gives you a hard-hitting A, slightly gentler B or a softer C, with all the modes delivering the full smack of power. Why not more options than the three that it has? “We could have four or five or six different modes if we wanted to,” said Kobayashi. “But these three modes cover most applications. Mode A and Mode B are sports riding, Mode C for the wet. B mode differs in that is set to avoid all wheelies and less slide. While wheelie control isn’t a seperate function, it is part of the entire traction control system.”

The next big step up in performance is the improved braking system – both in terms of the ABS and brakes themselves. Thanks to the extra readings and superior processing of the new electronics system, rear-wheel lift mitigation and pressure regulation when cornering is happening without you even feeling it and can be backed right off if you don’t want it. The brakes are still by Brembo but the stainless steel brake discs are 10mm larger in diameter hung off a new mounting system using an even split of conventional spring-loaded floating pin mounts and T-drive floating mounts. The Monobloc calipers work with a radial-pump master cylinder and for those that want the ABS can also be turned of with a workshop tool. 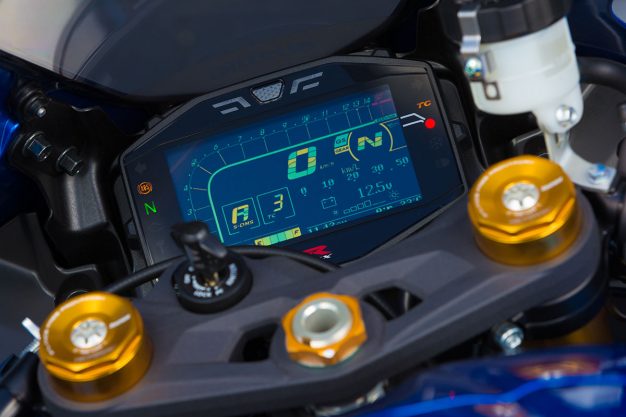 All the racers on the launch where impressed with braking performance of the new GSX-R1000R with Japanese test rider Hikaru Oshiro behind the development of the new system. “Where we have most improved them now is in regards to fade – they are much stronger now,” said Oshiro. “Initial bite is at high speed and performance on hard braking is also better too. Coming over Lukey Heights and hard onto the brakes downhill into MG the bike always feels stable and planted. On hard braking applications like into Honda Corner – especially for inexperienced riders – the GSX-R still stays perfectly stable. Our intentions was to keep the balance and control under brakes very stable.”

Braking hard into turn four at Phillip Island from a good turn of speed, the system does make hard-braking foolproof and lap after lap I found myself later and harder on the brakes turning earlier and earlier into the corner. On the other side of the corner I was getting on the gas earlier and earlier with more and more lean and the traction control would clean up corner exits with a flash of the warning lights and a little squirm of the rear. It could make a hero out of many riders for that fact while better riders will be able to more easily extract the full potential the new machine now has on offer.

With a shorter wheelbase, shorter trail and longer swingarm, the newly designed frame is significantly lighter and more compact than before. Holding a shorter and narrower engine, the desired handling characteristic has come from a change to frame components and the location of welding points like the steering head and the front engine hanger on each side that are now included as part of a single, one-piece cast structure. The suspension is the latest generation of Showa’s Balance Free Systems that uses external circuits instead of valve stacks. 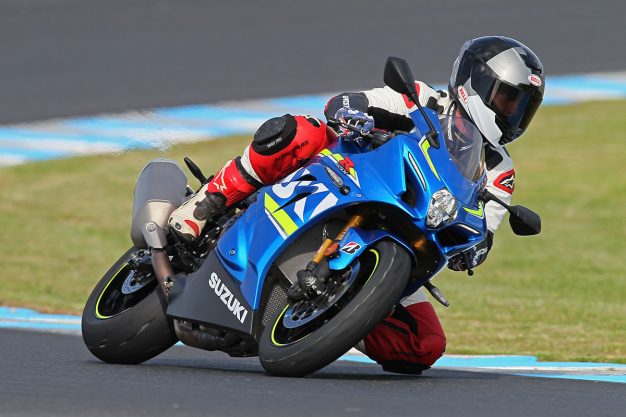 The system is deigned to deliver smoother, more precise and more consistent piston movement and damping control, and I couldn’t argue with that. Out of the box with Bridgestone RS10s, a switch at lunchtime to the racier R10s brought out more of the sharpness of the handling package with faster turn in, greater drive and better high-speed stability. Not that these factors were an issue with the GSX-R1000R in standard trim before, it just shows how much more is in store for riders that will be setting them up. And for that there will be a few.

In the metal, the new GSX-R is smaller than it looks – and it looks small. It feels and measures in every way smaller than the machine it replaces as well. Despite this it isn’t a pocket-sized machine to sit on. The new GSX-R is also more aerodynamically efficient. It feels much smaller and lighter than the previous machine, but when you are in the saddle there’s no mistaking the ergonomic dimensions for anything else than a GSX-R. As always, taller riders will find it accommodating and the narrower width at the legs means it’s easier to get your whole body tucked in out of the wind. The tank is lower as well, so even big heads like mine can almost get down under the fairing screen.

More powerful, lighter and better handling than ever before, the latest generation of GSX-R1000R has taken the machine that created the litre superbike class back to the front of the field again. It’s been the next generation machine that we have been waiting for and one that can’t come soon enough as it’s still a few months away from landing in Australia just yet. The pricing for the 2017 model GSX-R1000R – or the base model GSX-R1000 – haven’t been set yet, but as a price guide the base-model will be under $23k, arriving late autumn, and the up-spec R will be sub-$26K, arriving late spring.

For an in-depth feature on all of the 2017 Suzuki GSX-R1000R’s technical updates, be sure to check this Bike article on CycleOnline.com.au.