Interesting topics that we've taken note of during the 2017 season.

The 2017 Yamaha Motor Finance Australian Superbike Championship (ASBK) presented by Motul Pirelli has been a enthralling series to date this season, nearing the halfway point already and with plenty of surprises along the way. Here are some of the more telling topics we’ve picked up upon on CycleOnline.com.au. 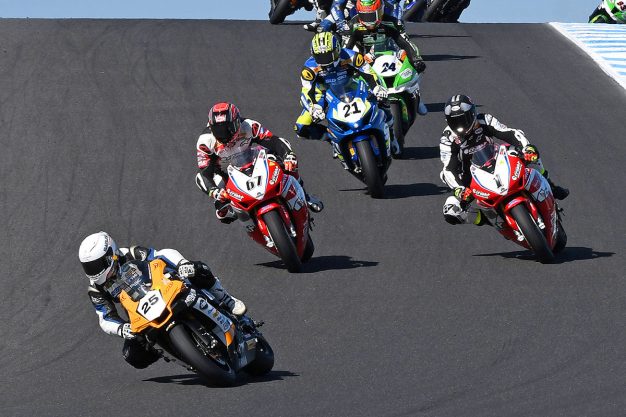 1. Tyre war:
We’ve kept close tabs on how the current ‘tyre war’ has been playing out in the premier class and, so far, Pirelli appears to have the upper-hand. Points leader Daniel Falzon switched from Dunlop to Pirelli prior to Phillip Island’s opener and won, ultimately leading to Yamaha Racing Team subtly moving across with success as well. Defending champions Crankt Protein Honda Racing are on Pirelli still as well, while top of the Dunlops are now Cru Halliday and Robbie Bugden, plus both Beau Beaton and Josh Hook have shown Bridgestones are competitive.

2. Falzon’s arrival:
With multiple 600 championships to his credit, Caterpillar JD Racing Yamaha’s Daniel Falzon has stepped it up again this year – his third season on the Superbike – and showed exactly what he’s capable of by sweeping the opening round. Such a good start has him atop the point-standings at this point and he most certainly belongs at the front of the pack this season.

3. Varying round winners:
Round one at Phillip Island belonged to Falzon, round two at Wakefield Park went to Honda’s defending champion Troy Herfoss and round three at Winton was dominated by factory Yamaha charger Wayne Maxwell. Competition doesn’t get much better than that and there are even more riders who are capable of winning before the season’s out (same goes for Supersport, with three overall winners from three rounds so far).

4. Injury of Allerton:
Three-time ASBK champion Glenn Allerton should be in the frame to challenge for the crown once again this year, however that heavy crash on Friday at Wakefield Park put him out of contention by missing rounds two and three with a badly broken arm. The target is to come back for Darwin and he will be hopeful of picking up some wins when he can upon return.

5. Qualifying races scrapped:
There was a fair dose of controversy surrounding Motorcycling Australia’s (MA) decision to introduce qualifying races for the standalone rounds in the lead-up to Wakefield Park. In the end, what we’ve seen is last year’s Superpole format removed altogether, plans to race on Saturday dropped and the more traditional two-session qualifying format reintroduced. The majority of these final decisions took place just one week out from round two! 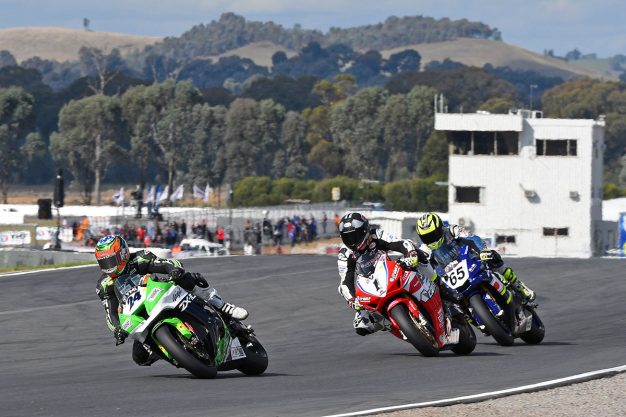 6. Barbagallo out, Hidden Valley in:
With motorcycle activity suspended from Barbagallo Raceway in mid-February, CycleOnline broke the news at the beginning of March that Hidden Valley was poised to return for the first time since 2013. A week later MA confirmed that Darwin was back on the schedule, with the support of the Northern Territory government, and it will be next on the calendar in July following the mid-season break.

7. Shock bike-swaps:
Confusion reigned and tempers flared in race one at Wakefield Park when we saw MotoGP-style bike-swaps take place locally for the first time. Turns out the ruling was particularly unclear and not all knew that you could actually switch bikes mid-race, however the results stood and there wasn’t much MA was willing to say about the matter directly following.

8. Two-part races tweaked:
There was a similar type of confusion during Phillip Island’s opening round during the restarted final race. Back then, times were combined across the two parts and, despite Maxwell crossing the line first in part two, initial leader Falzon was declared the winner on total race times. Following that, MA adjusted the regulations so that they’re now similar to the world championship, where the finishing positions of two-part races will be more simply determined by the race order when the final chequered flag falls.

9. Bugden in the mix:
When Kawasaki BCperformance’s Bugden was soaring to the Australasian championship last year, the common opinion was that he – and the other top riders in the series – wasn’t on the level of the ASBK’s best. Well, this year the team transferred across and it’s been a solid start for Bugden on the ZX-10R, picking up second at Phillip Island, third at Wakfield Park and then he tied for third (fourth on countback) at Winton. He’s only 14 points outside of the points lead and top of the Dunlop-runners, so he’s proven himself a worthy threat.

10. Final call for Honda:
It would seem that Crankt Protein Honda Racing’s ever-successful time with the previous model Fireblade is all but over, as they’ve taken delivery of the brand new CBR1000RR and will debut it at Phillip Island’s national launch today. Details are scarce, but expect Herfoss and Bryan Staring to debut the 2017 model in the Top End if all’s going to plan during testing, so stay tuned for more details when we have it!