Mid-sized adventure touring machines are a high volume market in Australia, and for good reason. They provide an excellent balance between power and weight, come in at a pocket-friendly price-point and deliver great fuel economy with options for both learner legal and full power variants. It’s a hotly contested playing field for all of the manufacturers but none have enjoyed more success in outright sales over the past 10 years than Suzuki’s sporty yet versatile V-Strom 650. Also known as the DL650, this dual sport motorcycle combines a peach of an engine with a nimble chassis that can commute or court adventure with equal aplomb.

More than 172,000 V-Strom 650s have been sold since the model’s introduction in 2004, which is a testament to its value and rock solid reputation. This year, the styling has been overhauled in favour of a neatly stacked headlight and more streamlined bodywork that bring it into line with its big brother, the V-Strom 1000. The entire ‘Strom family now flies the bold yellow flag of Hamamatsu’s off-road racing teams, with a more adventurous look inspired by the DR-Z desert racers of yesteryear. 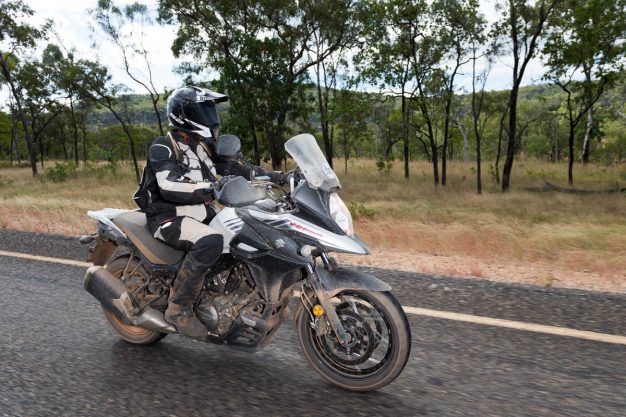 On the Oceania media launch in North Queensland we rode both the base model and the XT version through hundreds of kilometres of challenging terrain and confirmed that the dirt oriented DNA is more than skin deep. This middleweight ‘Sports Adventure Tourer’ tackled steep, rock strewn goat tracks and 2ft deep river crossings with poise and predictability, and with a standard long-travel suspension package of this quality, it was the perfect recipe for stress free riding, even in unchartered territory.

One of the major attributes of this motorcycle and possibly the underlying reason why they’ve consistently outsold the competition for more than a decade, is that it’s very easy to ride. The long 1560mm wheelbase and 26-degree head angle gives the bike a planted and stable feeling at speed, but this is balanced by quick turning capabilities from the bike’s flat handlebars and low centre of gravity.

The updated model feels more flickable than ever given the slimmer dimensions and, although the 43mm fork is probably a little on the soft side for what we were doing, it is capable of handling 90 percent of what most adventure riders would consider tackling with their own pride and joy. On the road this non-adjustable, conventional telescopic fork performs well and transmits excellent feedback that translates quickly into confidence. 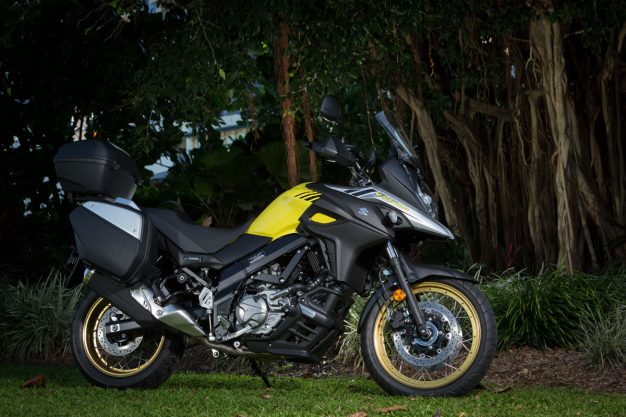 The comfortable riding position, and narrow engine configuration gives the sensation of a nimble ride, and the ground clearance is a respectable 170mm which comes in handy both on and off-road. A manual hand-wheel is positioned on the right side of the frame to allow the rider to simply and easily adjust pre-load setting on the rear fork, and there’s also a clicker for the rear rebound if you want to push your limits on the tar.

New external features for 2017, in addition to the DR-Z desert racer-inspired front end, include wind directing plates on either side of the radiator and a tidier rear-end with LED taillight that suits the more streamlined body shape. The pipe has also been changed from a high mount to a low slung one that makes it possible to fit a set of Suzuki’s new factory panniers. The comfortable ergonomics are enhanced by an 830mm high seat that’s 5mm thinner and slightly flatter in profile compared with last year’s model, and there’s less of a step up between the pillion seat and luggage plate which makes it easier to lash your kit down. 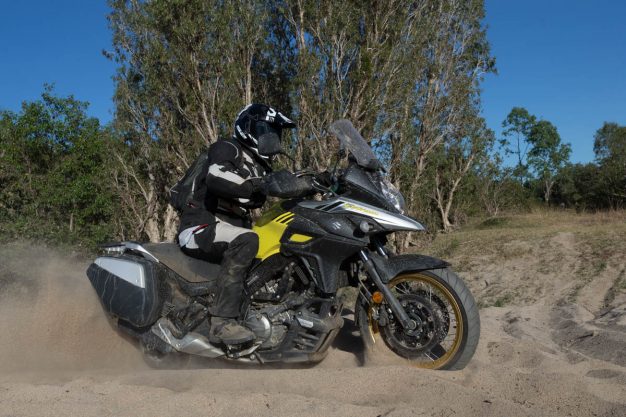 Internally the 645cc V-Twin benefits from a simple but effective two-stage traction control system that can also be switched to ‘off’ using the intuitive mode button on the left switchblock. Peak torque of 62Nm at 6500rpm is 2Nm higher than last year’s model courtesy of reduced internal friction and a revised engine map, and an additional 1kW power has also been gleaned from the donk to bring it up to 52kW at 8800rpm. Tin plating and a resin coat on the pistons is largely responsible for reduced coefficient of friction on moving parts and has the added advantage of improving lubrication of the skirt which reduces wear and tear in the long term. L-shaped piston rings also reduce the amount of blow-back, and this feature is accompanied by an increased cam lift on the revised camshaft that makes exhaust gas removal more effective.

The Suzuki Easy Start System (SESS) and Low-RPM Assist (LRA) are two more handy features that have been introduced this year. The SESS allows the bike to be fired into life with just a single push of the ignition dispensing with the need to work the throttle or engage the clutch during the starting procedure. LRA automatically lifts the idle speed when the clutch is initially disengaged to reduce the chance of stalling and is particularly useful for riding in congested environments where you have to repeatedly stop and start. It won’t prevent the bike from conking out if you drop the clutch without any revs but it certainly makes life easier for learners who may still be getting to grips with their clutch finesse.

Fuel efficiency has also been targeted this year with a new 10-point, long nose fuel injector system to more accurately direct fuel to the detonation point and further improve combustion. Suzuki is claiming a range of up to 500km from the massive 20L tank and while it certainly has an impressive fuel economy and capacity, in reality it’s probably closer to 400km of real world riding. The new dash looks cleaner and more modern with the added information on TC settings, but it does seem a little clustered with so many small digital numbers on the LCD. The fuel range feature and gear position readout are useful for long trips, as is the manually adjustable screen which can be moved to three different positions by removing the allen head bolts. Overall the wind protection now extends 9mm higher and this helps to reduce buffeting at highway speeds. 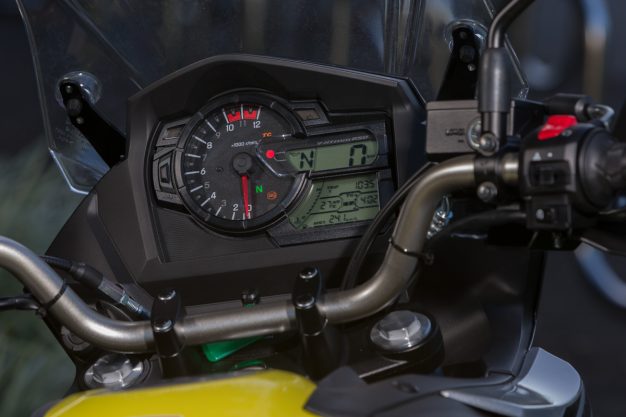 The price of the base version, in unrestricted or LAMS trim, remains unchanged at the bargain basement price of $10,990 and also includes a 12V DC charging plug which is a useful standard feature for charging phones and satellite navigation systems during long trips. For an extra grand you can get the XT model which comes with a belly spoiler, hand guards and heavy duty DID wire wheels, the latter of which looks trick with gold anodised rims in the Champion Yellow colour option.

This middleweight class-leader is a breeze to ride and navigate traffic in urban environments, but with a set of panniers it could also take you on the trip of a lifetime. It looks a little different to its predecessor, but in reality it still embodies the same core chassis elements and proven engineering qualities that have seen it top the sales charts. This new V-Strom 650 is sure to remain a favourite amongst those who can recognise a good deal, and the addition of traction control this year will likely give it even greater appeal for those just beginning their adventures on two-wheels. 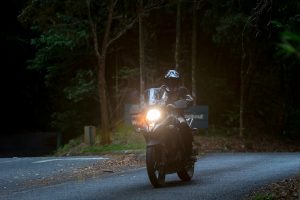 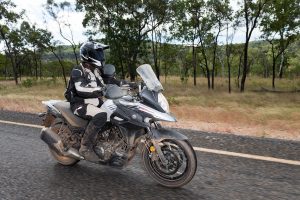 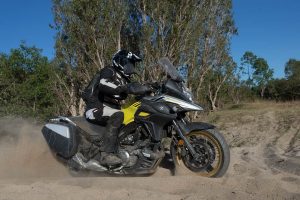 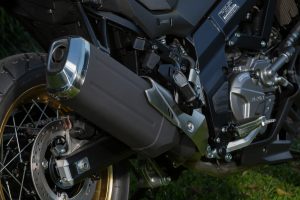 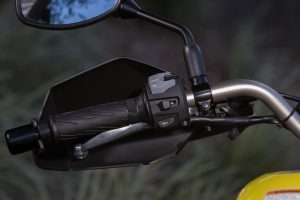 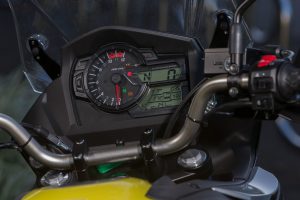 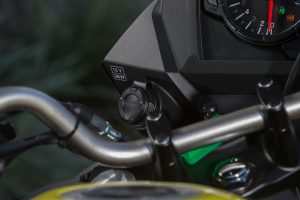 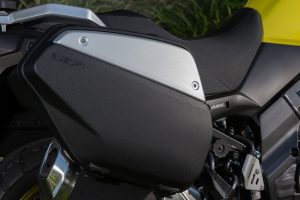 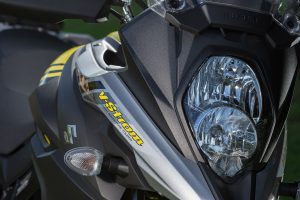 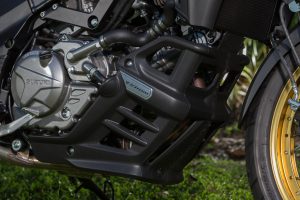 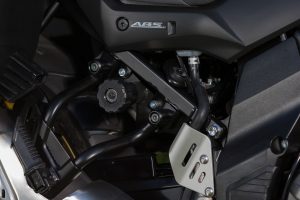 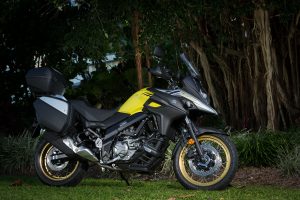