Austrian brand KTM has defied the odds by making their new version of the 2017 KTM 1290 Super Duke R even more thrilling to ride than the outgoing model. The Mattighofen manufacturer has added more power, as well as a few suspension and electronic tweaks, to better equip their flagship big bore naked for track day antics. In addition to a full TFT dash and keyless ignition, there’s also been a significant redesign of the front end that complements the Super Duke’s laser sighted capabilities and powerful stance.

The beast, as it’s affectionately known, was first unveiled by KTM in the capable hands of gun rider Jeremy McWilliams. It was a game changer for 2014 – a massive jump up from the inspirational 990 Super Duke of 2005 – and has since been well received by those who appreciate brute force and serious street credibility. As a modern muscle bike it bristles with a personality unlike anything else on the market so it’s fitting that it was the headline act for the recent KTM Street range launch in NSW. Media from all over the country lined up to sample a half a day of flat-out testing at Sydney Motorsport Park’s South circuit and it was an eye-widening experience for all involved. 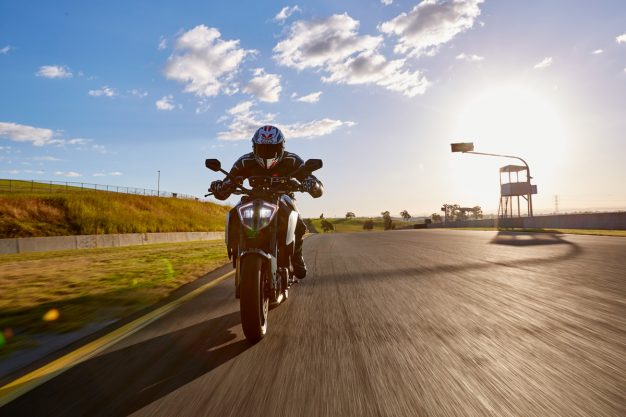 The torque riddled 1301cc 75-degree V-twin power-plant was in its element trying to tear our arms out of their sockets as we punted this new and even more aggressive big bore naked bike around the technical and undulating 1.8km layout. The 1290 Super Duke R produces a staggering 141Nm at 7000rpm and 130kW at 9750rpm, which is a handful in anyone’s book, but despite what you’ve heard it is actually one of the easiest motorcycles of its kind to ride fast. This is partly because of the well refined electronics and sophisticated rider assistance systems, and also because of the comfortable upright riding position with its new 20mm wider handlebar that sits 18.5mm further forward and 5mm lower than before.

In stark contrast to the staunch styling this is a motorcycle that will flatter you with an invisible safety net of protection as you push the limits. The traction control system (MTC) has seven active levels and works in concert with the ride by wire throttle and Bosch’s Inertial Measurement Unit (IMU) to intervene via the throttle bodies in a manner consistent with the angle of lean. This artificial intelligence makes it possible to drive hard out of turns with the bike cranked over with a solid sense of trust in that the software will calculate the optimal amount of firepower to direct into the pavement.

The next generation beast has also undergone some fine tuning to free up even more power and a 500rpm higher rev ceiling. The major refinement to the motor relates to lower crank inertia and less vibrations, with a cleaner burn courtesy of shorter resonator chambers (aka velocity stacks) leading into the throttle bodies. Valves are now made of Titanium too which is lighter, stronger and up to the task of handling the higher compression ratio of 13.6:1 (up from 13.2:1). 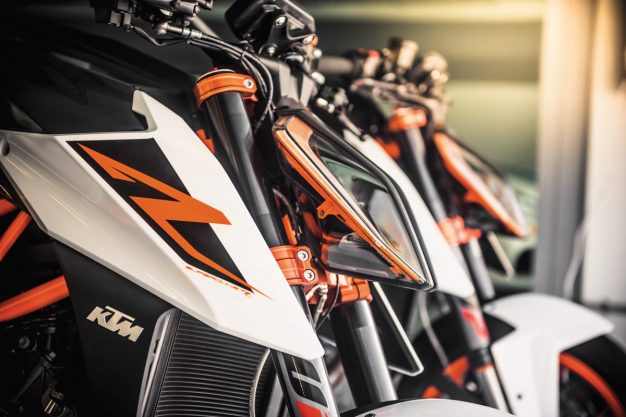 The ride by wire throttle system offers three engine modes to select from – Sport, Street and Rain. Sport and Street provides the same outright power and torque albeit with a slightly different delivery character on initial throttle opening and a corresponding adjustment to the intervention of MTC. Rain mode churns out 95kW at its peak but allows for minimal rear wheel slippage to increase safety in slick conditions (MTC level 7). The ABS system also cross references data from the five axes of lean measured through the IMU and modulates braking pressure on corner entry to reduce the chance of low-siding.

A novel feature of the Duke range is the inclusion of a Supermoto mode, which allows limited front wheel slip while deactivating rear ABS without necessarily switching the system off entirely. There’s also Motor Slip Regulation (MSR) included in the optional ‘Performance pack’ which helps to back in the bike on corner entry and build on the efficacy of an already satisfactory standard issue slipper clutch. 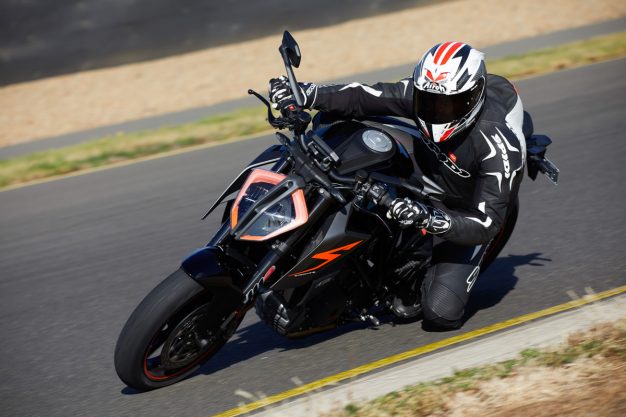 These features take full advantage of the stopping power and feel supplied by four piston Brembo M50 radial mount Monoblocs up front that can put this Beast on its nose with a single finger squeeze on the adjustable lever. KTM has clearly had their ear to the ground during the R&D process for the beast 2.0, and the suspension and geometry have not been omitted from the model’s revision. The 48mm WP fork now has stiffer springs and the matching rear mono shock also underwent a complete revalve to improve the damping adjustability. The short 1482mm wheelbase and 24.9-degree rake makes for a rapid turn in rate, and the stiffer suspension now allows the bike to track a tighter line which was a limitation revealed during closed circuit tests on the outgoing model.

It now feels even lighter to tip in to corners which has the by product of making it easy to select a line, however the steep head angle and massive amounts of torque on tap easily generates wheelies on corner exit (even with the anti wheelie control on) and that can present as head shakes from the front wheel skipping along the tarmac. This aspect may be remedied by some adjustments to the steering damper and MTC but it was never severe enough during our track test to require a solution.

There’s 141mm of ground clearance before the rearsets begin to grind which provides more than enough lean angle to get some decent times at the track. Those who crave more will be smitten with the range of factory accessories in the KTM Power Parts catalogue that also include some additional electronic packages to take full advantage of the brands mantra ‘Ready to Race’. The ‘Track pack’ is available for $599 from KTM dealers and includes a ‘Track’ riding mode, which has launch control and allows the anti-wheelie control to be switched off. It also gives the rider freedom to manually configure the throttle response and utilise nine levels of MTC Spin Adjuster function to slide the bike out of turns under power. 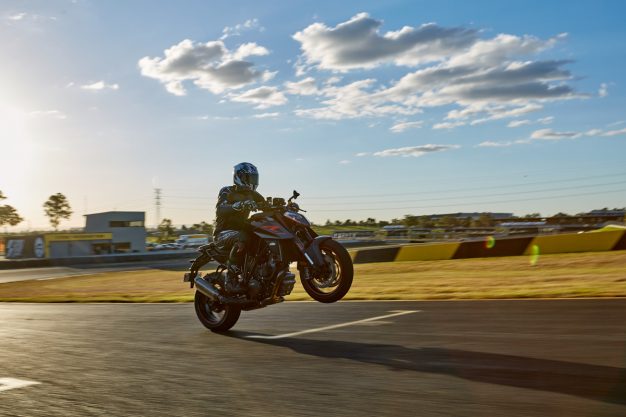 KTM’s ‘Performance pack’ includes the coveted up and down quickshifter, as well as the ‘My Ride’ feature which pairs with headphones or smartphones via Bluetooth for music streaming, answering calls, etc. It will set you back another $799 and also has the aforementioned MSR feature, which kicks in where the standard slipper clutch reaches its limit for controlling rear wheel slip.

These discrete features have been devised to increase performance and control, but the most striking change the 2017 1290 Super Duke R is the somewhat intimidating look. It’s certainly a thing of beauty and it could possibly be the most radical production motorcycle that has ever graced the streets. For the price tag of $24,995 plus on-roads, this is a hell of a lot of motorcycle and KTM deserves kudos for thinking outside the box to produce a class leading motorcycle that rides and sounds as good as it looks. 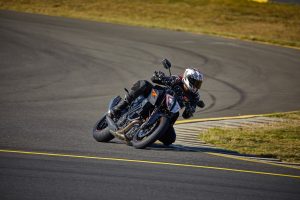 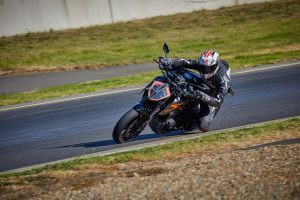 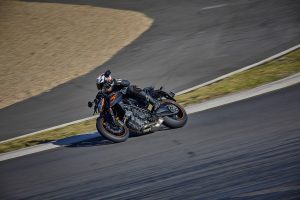 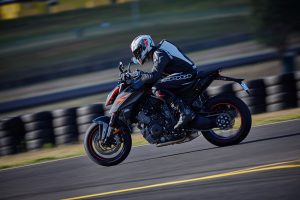 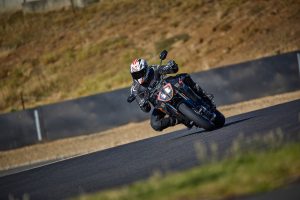 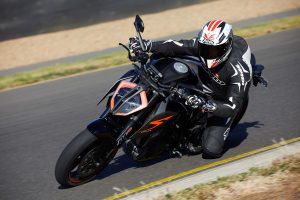 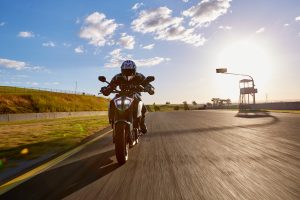 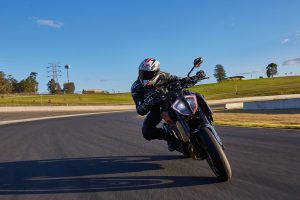 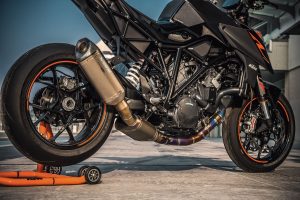 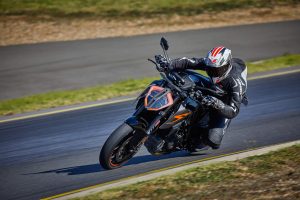 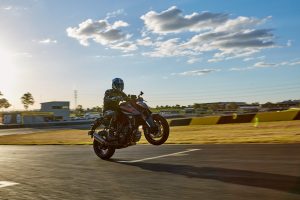 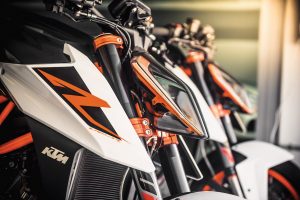