Suzuki has a rich history of tapping into the sweet spot for street sport motorcycles and the latest addition to their aggressive naked stable has really hit the mark for both price and performance. The new GSX-S750 replaces the outgoing GSR750 and unites the marque’s powerful clan of stripped down roadsters, which includes the recently-released GSX-S1000 and the yet to arrive GSX-S125.

Although many of the core components, like the bulletproof K5 GSX-R750 engine and frame carry over from the GSR750, there are several tweaks to the design, performance and the handling package which make for substantial improvements in the overall ride quality. The GSX-S750 will retail for just $700 more than the model it replaces, putting it firmly in the realms of possibility for fully-licensed riders who are looking to shoot higher than a mid-capacity model without stepping up to a heavyweight. 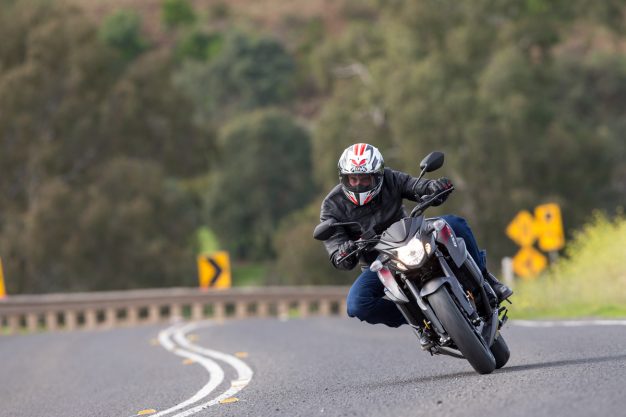 Major upgrades for this new model include the radial mount Nissin callipers with 310mm floating petal discs that deliver superior stopping power for the bike’s 213kg wet weight and a redesigned cross-section swing-arm to replace the box-shaped unit on the old GSR. Add to this the benefit of a 41mm Kayaba front fork, which is adjustable for pre-load, and you have a combination of front-end feel and control that is more than capable of holding its own on the back roads and leagues ahead of the more reserved GSR.

Some will be critical of Suzuki for using a powerplant that first debuted more than a decade ago, but the K5 Gixxer engine is one of the best in-line four-cylinder mills ever made and there has been a lot of refinement since then. The crank case, fuel injectors, air-box, exhaust and ECU mapping have all been revised to ensure that this engine remains competitive without falling afoul of Euro 4 emissions standards.

There are now ventilation holes on the bottom side of each cylinder to reduce pumping losses and the eight-hole fuel injectors on the GSR have been replaced with 10-hole long nose items to deliver increased fuel volume and finer atomisation for better fuel efficiency. With a 16L capacity you should see close to 300km per tank in real world conditions, which is a plus for owners that are considering this bike as a daily ride. 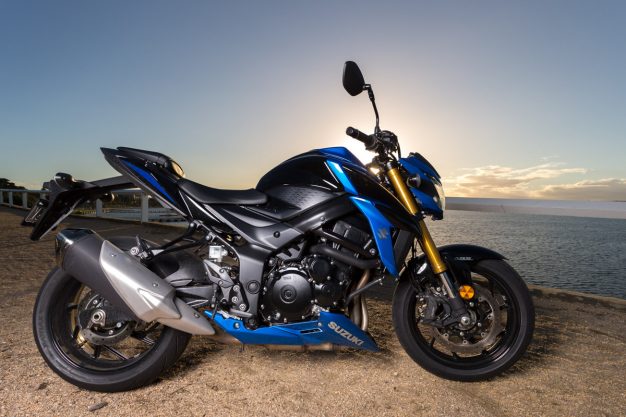 The 749cc long-stroke motor churns out most of its mumbo quite high in the rev range with 81Nm of twisting force produced at 9000rpm and 84kW of power at 10500rpm, but it still delivers a smooth and buttery build through the range with decent power down low. The healthy hit of zing up top is good for weekend blasts and the upright seating position makes commuting or manoeuvring though traffic-congested arterials relatively painless.

Just like the head of the family, the GSX-S750 shares a simple but effective three stage traction control system that cuts drive to the rear wheel with varying tolerances for wheel-slip depending on the mode. Switching modes is a simple affair that can be done on the fly by closing the throttle to engage a new setting and it’s all taken care of with a few thumb flicks on the intuitive left switch block. The least intrusive mode is Level 1, not counting the ‘off’ selection, and Level 3 represents a handy safety net for riding in very rainy or slick conditions.

The system has a memory so there’s no chance of it reverting to a default setting once the key is removed which is refreshing in this modern age of ‘what if…’ scenarios. The Easy Start System (SESS) and the Low RPM Assist (LRA) feature are also included so the bike fires into life with just a single press of the ignition and the engine idle increases slightly on the initial disengagement of the clutch to reduce the likelihood of stalling. 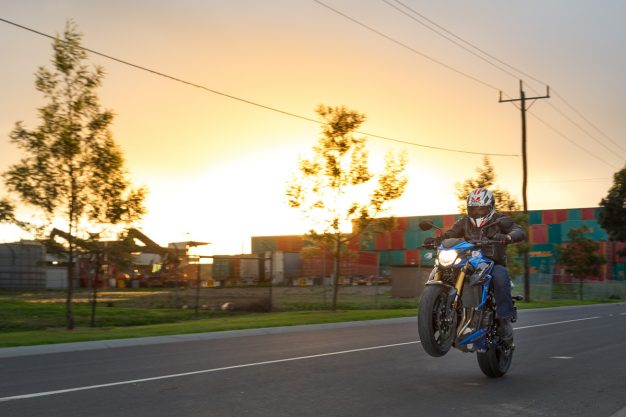 Bridgestone S21 tyres fitted standard are a popular hypersports hoop and well suited to road riding, but given the slippery, clay-splattered surfaces we sampled on our winter launch in Victoria it was difficult to test their efficacy on this relatively short ride. The new 10-spoke cast aluminium wheels offer genuine ‘GSX’ appeal and the gear ratio has been shortened to improve acceleration down low while still retaining the same top speed as the GSR (think somewhere in the order of 225km/h).

The unmistakable induction roar of the K5 GSX-R engine has also been improved with the new air-box, which gets fed from three optimised inlets. This makes for an encouraging howl courtesy of the 4-2-1 exhaust that will tempt you to twist the throttle further at every opportunity and, despite the conservative benefits of sticking with the Euro 4 compliant standard exhaust, I would opt for a slip-on muffler to take full advantage of this awesome sound track.

On a more practical note, the comfortable ergonomics of 32mm tapered bars are paired with a moderately low seat height of 820mm and, although details of a comprehensive accessory list are unconfirmed, this type of bar clamp system will lend itself easily to risers if a more upright position is desired. Notwithstanding a little ‘naked bike neck ache’, which is unavoidable when you’re completely exposed to the brunt of oncoming wind, we spent all day scratching on some fairly bumpy roads in relative comfort. 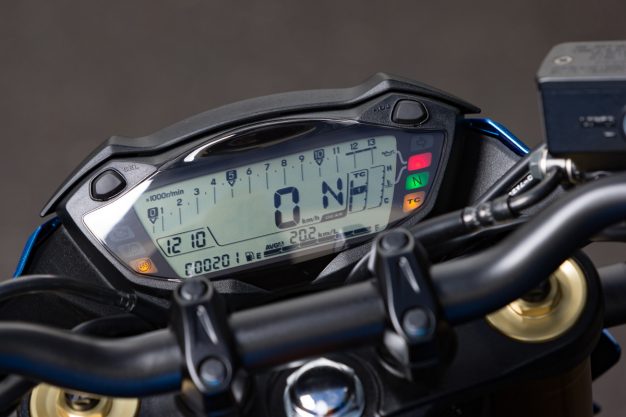 The dash is typical Suzuki – very easy to read while riding and comprised of a tasteful LCD display that doesn’t come across as dated, even in the modern era of over engineered TFT screens. It covers all the additional information you could wish for, such as fuel range and gear selection, along with the all important clock, trip meters and odometer. The speedometer and tacho take pride of place which offset the unit’s discrete position on the backing plate of the headlight, albeit at a good angle for vision.

Its front-end styling differs slightly but significantly from the litre model with the tough triple light layout and this makes for a more modern and aggressive attitude that suits the demographic nicely. The GSR’s practicality has been retained on this model, but sporty radiator shrouds and belly pan confirm that the GSX-S750 is ready to spar with the other bikes in the class. With the exception of the tongue twisting model name (try saying GSX-S750 10 times fast!) and the flighty behaviour which could have been remedied with a decent steering damper, there’s very little not to like about Suzuki’s cut-price naked.

The capacity is bang-on for road riding and it would also be versatile on closed circuits with the usual refinements to front and rear suspension if that’s your bag. The gearbox and engine have Suzuki’s bulletproof reputation to back them up and with a price tag of just $11,490 plus ORC it’s likely you’ll be seeing a lot more of these on the road in the future for good reason. 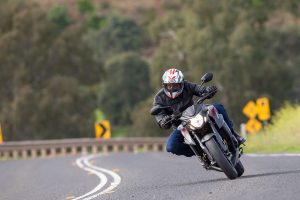 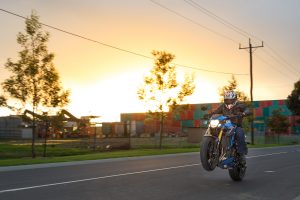 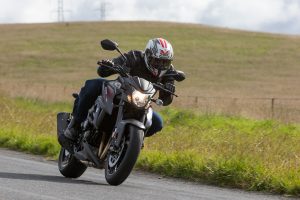 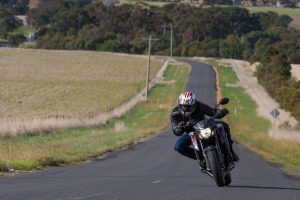 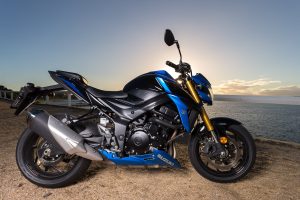 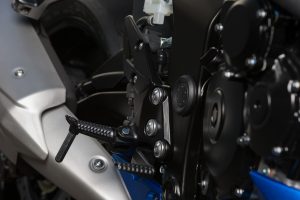 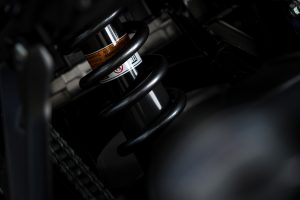 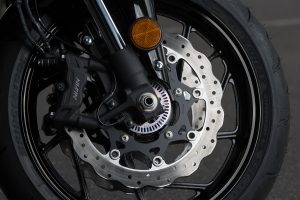 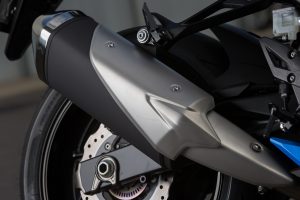 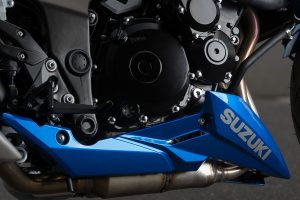 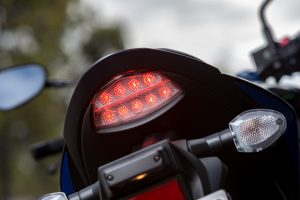 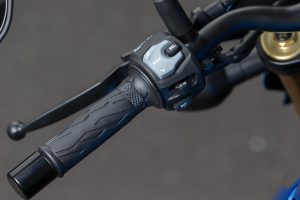 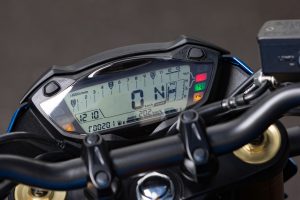 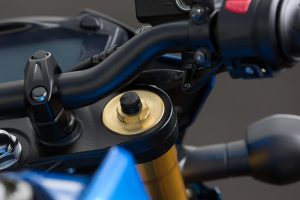 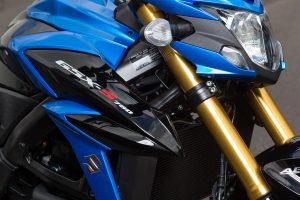