This year KTM has reinvigorated their learner legal 390 Duke by adding class leading technology and a host of revisions to the chassis, ergonomics and drive train. It may look similar to last year’s model, but this small capacity, stripped back naked delivers a much improved ride quality that far exceeds anything else that you’re likely to experience in the LAMS category.

It’s fun to ride and exceeds all expectations for performance and handling. Being nimble and flickable is par for the course, but the addition of a full TFT dash and ride-by-wire throttle really puts the next generation ‘Baby Beast’ in a league of its own. 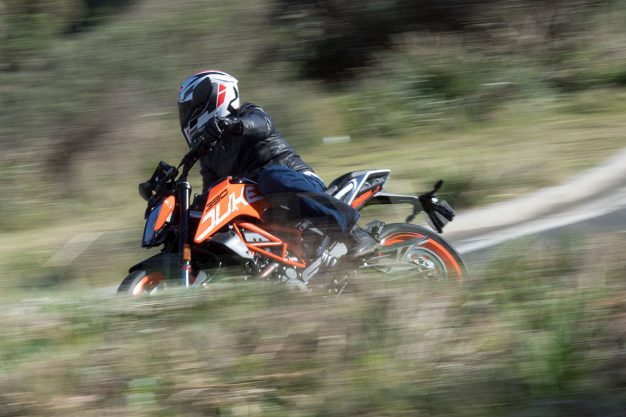 The new electronically-operated throttle transmits the signals from your right hand to the throttle bodies at the speed of light model to bring out the best from the 373.2cc single cylinder mill. Performance is impressive for the class with a surprisingly wide band of torque that climbs rapidly to a peak of 37Nm at 7000rpm, which is 2Nm more than that of the outgoing model. Outright peak power remains a respectable 32kW at 9000rpm and this extra zing up top corresponds nicely with the kind of low down grunt that is well suited to zipping around town or putting down quick bursts of acceleration.

Although the 390 Duke is obviously better suited to urban environments because of the raw styling and lightweight capacity, it will happily cruise at 6000rpm in sixth gear at highway speeds with plenty left in reserve for overtaking. Fuel capacity has now increased from 11 to 13.4L and the wide handlebars have been redesigned this year to suit the more relaxed ergonomics which make the 390 Duke capable of long stints in the saddle. The increased size of the bike has really opened up the bar to seat to footpeg ratio for real world riding conditions and it’s one of the few examples I can recall where a model’s physical mass has actually been increased over time for the rider’s benefit.

The riding position is still confidence inspiring but it’s now better suited for those of a taller stature, while the seat manages to remain low enough to appease the majority at 830mm. On the whole the 390 Duke now sits a little higher off the ground which improves ground clearance and makes it a real blast to ride in the twisties. When the pace started to hot up on our test ride the swag of chassis and geometry changes started to pay dividends. 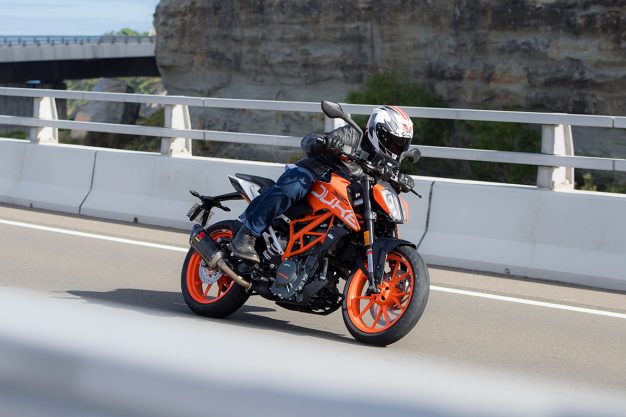 The 43mm WP USD cartridge style fork is completely new and although it remains non-adjustable, it does transmit plenty of feel to the rider in a manner that is more than up to the task of weekend scratching. Front wheel travel has been reduced by 8mm down to 142mm for a sportier feel and this performance upgrade to the fork has been followed up with internal revisions of the pre-load adjustable rear shock unit that complete the handling package.

The larger steel tank now has a taller profile, which can be easily gripped with your thighs to take the weight off your arms while cornering, which is a definite plus for deciphering feedback from the motorcycle. There’s also a new swing-arm and the adoption of a bolt-on rear sub frame that uses a similar design to the almighty 1290 Super Duke R in replacement of the one-piece frame and swing arm combination of the previous model. 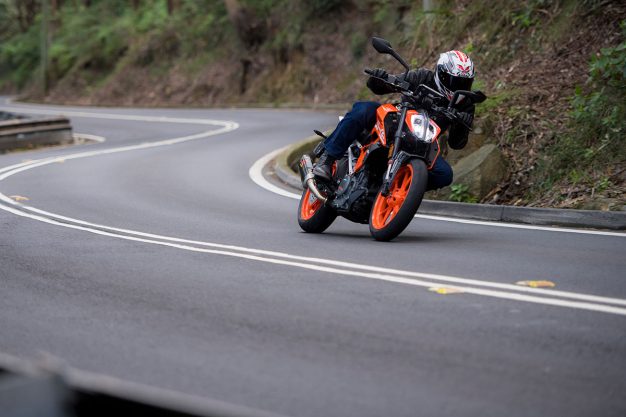 For around town use, the moderate rake at 25 degrees and 95mm trail figures work exceptionally well with the short wheelbase of 1357mm to allow quick changes of direction. And it should be noted that this motorcycle has an incredibly tight turning circle at low speed which is perfect for manoeuvring in and around traffic.

The 390 Duke also gets a new slipper-clutch for limiting back torque when downshifting, along with a side-mount exhaust which shaves off weight and further assists the model achieve Euro 4 emissions standards. Both clutch and brake lever are now adjustable and the stopping power has been improved by increasing the size of the front disc by 10mm to 320mm.

Bosch’s switchable ABS unit remains, however there is now a ‘Supermoto’ mode that disables rear ABS and can be selected via the TFT screen with a few clicks on the left hand switch-block. The full colour display is an unexpected bonus for such a well priced motorcycle and represents the first of its kind for a LAMS legal motorcycle. It does somewhat resemble a 5.2-inch smartphone attached to the back of the headlight, but having Bluetooth connectivity via KTM MY RIDE is a very appealing standard feature and one which has raised the bar in this genre. The KTM PowerParts catalogue is crammed full of goodies for the new 390 Duke that included tank bags, crash protection and even a clothing range for those who decide to go all in. 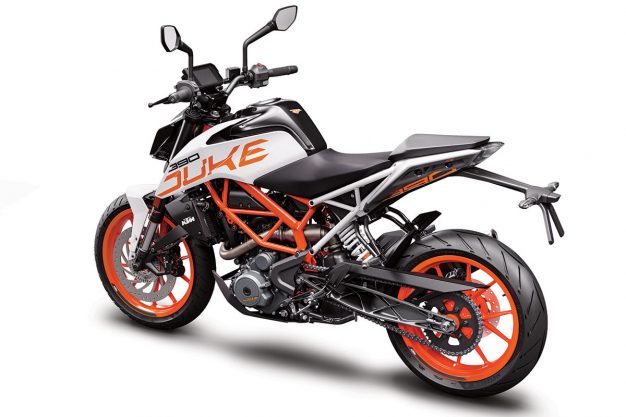 The sharp looking headlight is not only stylish and reminiscent of the Beast 2.0, but it also serves as a heat sink for the LEDS by way of its construction on sculpted aluminium brackets for the positioning of diodes and reflectors. KTM is clearly working towards the family model that has proved so successful in other manufacturers and you can expect the clan to be completed this later year when they launch the new mid-capacity 790 Duke.

Naked bikes are clearly more than just a passing fad because they genuinely deliver on the comfort, ergonomics and raw performance that most riders hold in high regard. KTM’s 390 Duke is a perfect case in point and now leads the way in terms of technology for small capacity bikes in many areas. For under $7000 plus on-roads, this lively little beast offers great value for money, but more importantly it delivers exceptional ride quality and that will definitely strike a chord with both newcomers and veterans alike. 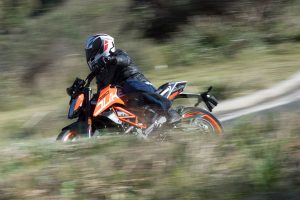 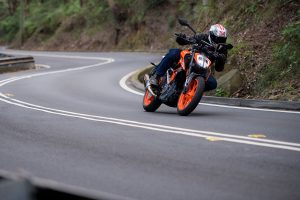 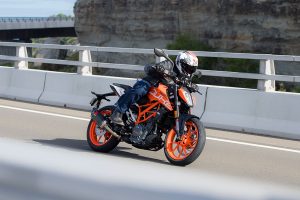 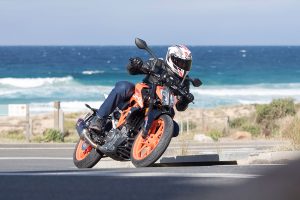 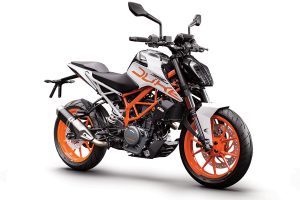 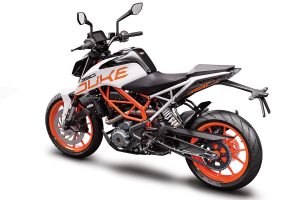 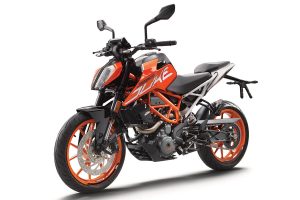 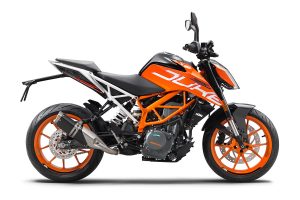 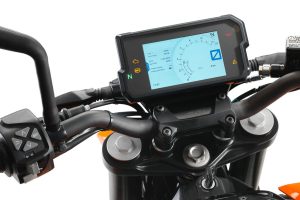 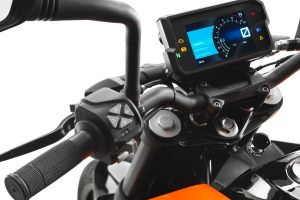 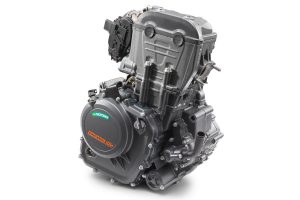