For 50 years the iconic V7 stands as one of the most celebrated and well-known Moto Guzzi models. This motorcycle is instantly recognisable and has appealed to generations of riders because of its traditional Italian style and by setting itself apart from all other brands with a unique V7 engine configuration.

The model was first released in Italy in 1967 and built its reputation on reliable and practical appeal that exemplifies Italian design par excellence. Fifty years later, Moto Guzzi introduces the third act of a first work – the V7 III.

The V7 is the brand’s best-seller since 2009 and constitutes the Moto Guzzi entry-level bike which is dedicated to both women and men. The new V7 III is the result of Moto Guzzi’s modern passion and courage as much as it is the ability to renew a best-selling motorcycle without compromising the character and authenticity. The V7 III is available in the three well-known and popular versions – Special, Racer and Stone. 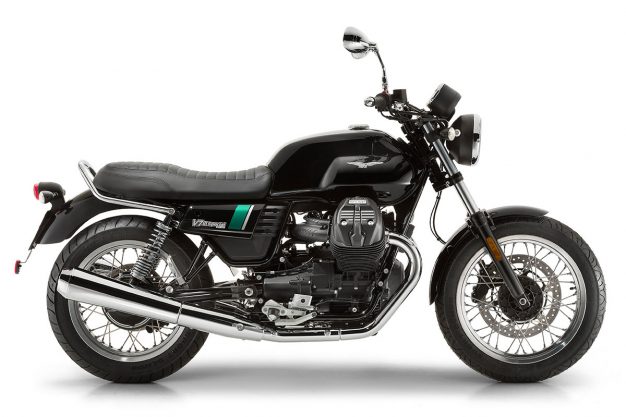 The Stone comes in a matte styling that stands out for in black graphics. The Special has a more classic style dominated by chroming, more in line with the design of the forerunner, while the Racer represents the successful sports heritage of Moto Guzzi – a winner of 15 world titles and 11 Tourist Trophies in their halcyon 1950’s racing era. This year the V7 range has now been expanded to include a fourth version, the Anniversario, which pays homage to 50 years of the V7 model with a limited numbered edition of just 750 units.

A new engine for the V7 III represents a power increase of 10 percent and reinforces Moto Guzzi commitment to continue with the ‘seven-fifty’ configuration as the entry level Moto Guzzi. Contained in size and weight, V7 III is easy to ride while still offering the strong and authentic character that is typical of all Moto Guzzi powered bikes showcased by the longitudinal V-twin engine – a unique Moto Guzzi configuration.

Changes to the V7 III are significant. The aluminium crankcase, stiffened in the key points, uses a new oil sump and a crankshaft design with crank inertia calculated to provide a more lively response and an ideal amount of engine braking. The lubrication and crankcase ventilation systems have been fully redesigned to improve efficiency through reduced power losses associated with internal drag. A new high efficiency oil pump has also been introduced with revised bypass and flow control systems, further reducing parasitic load. 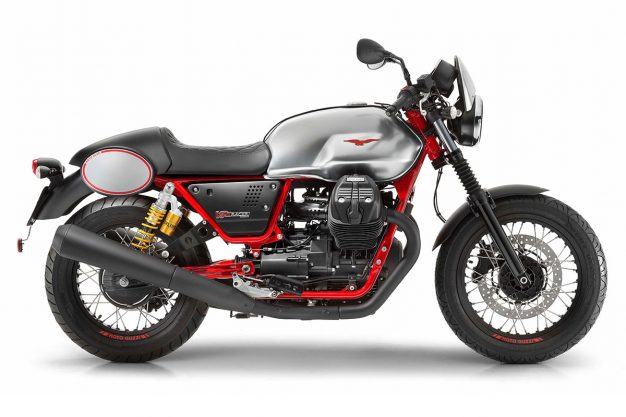 In the upper-part of the engine, the aluminium heads, pistons and cylinders are completely new as is the exhaust system which is fitted with double pipe manifolds that improve thermal insulation. Maximum power has increased to 38kW (52 HP) at 6200rpm, with maximum torque of 60Nm at 4900 rpm, however an auxiliary air system intake in the heads, combined with the trivalent catalytic converter, double oxygen sensor, and new engine design ensures that the Moto Guzzi twin 750 complies with the strict Euro 4 emission standards.

Another innovative aspect of the Moto Guzzi engine is the 170mm dry single disc clutch that increases sturdiness and reliability over time, also decreasing the load on the lever at the handlebar, all to the advantage of modulability and riding comfort. The six-speed gearbox introduced on the V7 II is unchanged but the precise and smooth transmission now benefits from revised first and sixth gear ratios, taking full advantage of the engine’s increased torque and power.

The V7 III retains the popular stylistic personality of the model, with additional improvements including a lockable screw cap fuel filler, new injector covers, sleeker side fairings, new saddle and upgraded graphics for each of the models. The turn indicators are also new, as are the 40 mm wider mirrors that increase visibility. Owners can interact with the instrumentation using the new mode button on the right hand switch block which provides access to the menu functions on the fully updated dash, replacing the control buttons used on earlier models. 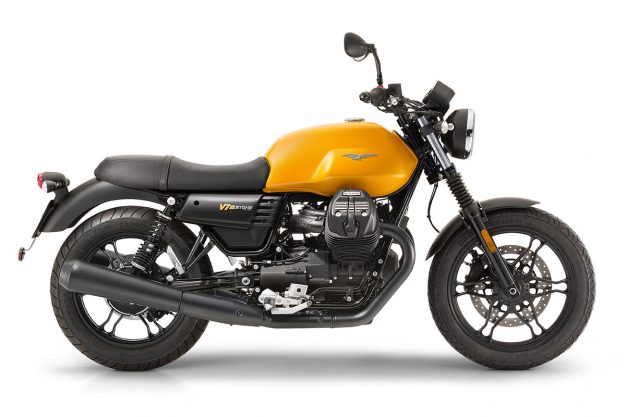 The rich catalogue of dedicated accessories, includes the Moto Guzzi multimedia platform (MG-MP) with a new interface module and dedicated smartphone mount. The MG-MP is accessible via smartphone by downloading the free MGMP app for iPhone and Android and delivers greater connectivity between the motorcycle and the rider through access to an exceptional quantity of useful travel information that would otherwise not be viewable.

Moto Guzzi does not disappoint in redesigning the frame of the new V7 enhancing the previous generation V7s broad appeal and rider friendly qualities. The steel frame maintains the dismountable double cradle layout of its predecessor and the same weight distribution (46 percent front and 54 percent rear), but the front part has been completely revamped and reinforced, with new steering geometry that guarantees a more dynamic ride in corners and better handling and stability to meet the riding needs of the modern motorcyclist.

The passenger can also count on a comfortable seating position, thanks to the repositioning of the foot-pegs, lower and farther forward. The rider’s position changes, although not by much, with the lower saddle (now 770mm from the ground) and the new aluminium foot-pegs. The seat to handlebar to foot-peg ratio has been revised to deliver ideal measurements for any size rider and the chassis structure revamping is completed with a rear brake master cylinder with built-in reservoir that guarantees quicker response and more precise braking modulation. 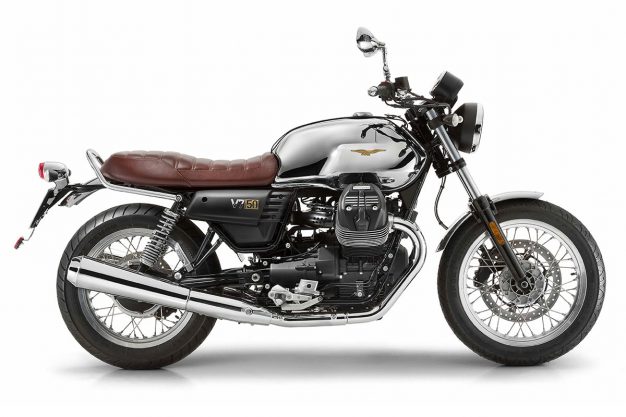 The V7 III while classic in design and style is absolute cutting edge in rider safety features. Twin channel ABS and a new adjustable MGCT (Moto Guzzi Traction Control) system that can also be disabled are standard features. The MGCT system is adjustable with two sensitivity levels, one more conservative and ideal for use in poor grip situations such as wet or slippery roads and the other designed to optimise safety and stability on dry roads.

Traction control settings can be instantly selected on the fly using the normal starter button and another modern adpation of the MGCT system is the ability to recalibrate the rear tyre circumference, compensating for tyre wear or the use of different profiles so that the traction control system remains accurate.

The V7 dedicated Moto Guzzi Garage customisation philosophy continues on the V7 III with a dedicated range of factory accessories so that every Guzzi rider can personalise their personality. Some examples include satin finish aluminium side fairings, injector covers, luggage racks, leather and touring side panniers, and aluminium brake and clutch levers just to name a few.