Kawasaki’s Versys model line-up has reached its 10th year in production since the 650cc adventure-styled sports-tourer was first released in 2007. With long travel suspension, upright ride position and sports-like handling dynamics, the Versys was a versatile machine on any type of road. Fast-forward to 2017 and the model line-up now includes 650 and 1000cc machines that still cover a broad spectrum of riding environs like the original Versys, along with the new Versys-X 300. However, it only takes a fleeting look at the new model to see that this new machine is ready for more than just the tarmac.

Built off the class-leading, learner-legal, Ninja 300 sports bike engine platform, the Versys-X 300 delivers an engine characteristic that developing riders will find easy, enjoyable and confident in using no matter what conditions they are riding in. Throttle response has been optimised for low and medium rpm – a reflection on the slower speeds you are likely to encounter off-road. The performance wont pull your arms out of their sockets, but will fire you away from the lights quickly without having to feather the clutch to get up to speed. 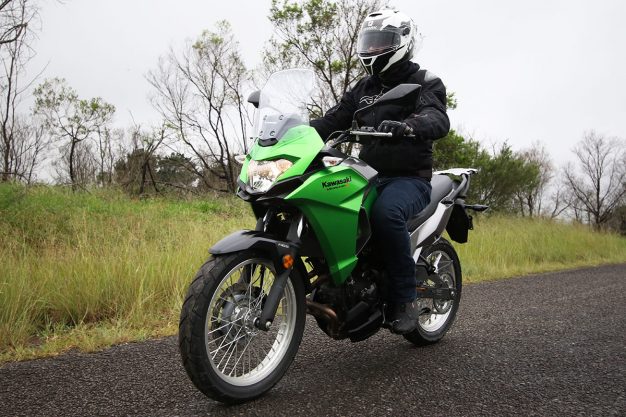 The gearbox ratios are well spread and to get up to speed quickly you need to move through the gearbox swiftly, something the light clutch actuation and slick, six-speed box make easy. The slipper function of the clutch is the only form of traction control, along with ABS, and is of great benefit on rapid deceleration – something that can easily happen with learning riders tapping too down too many gears on a corner approach or coming to a stop. This type of incident shouldn’t ever happen though with a superb dash display including a gear position indicator, which is a quality touch you don’t often see on a learner bike.

The engine revs high, but you’ll find the best performance is available between 7000 and 10,500rpm out on the open road. The Versys-X 300 will easily maintain freeway speed limits, but is a tad more vibey than the likes of the Ninja and Z300 it shares the same engine with. Comfort is where this new machine is most noticeably different and better for covering long distances, something the 17 litre fuel tank makes the most of with a range in excess of 320km easy to achieve in any type of riding conditions. The same needs to be said on the rear with a comfortable perch and massive pillion grab rail. 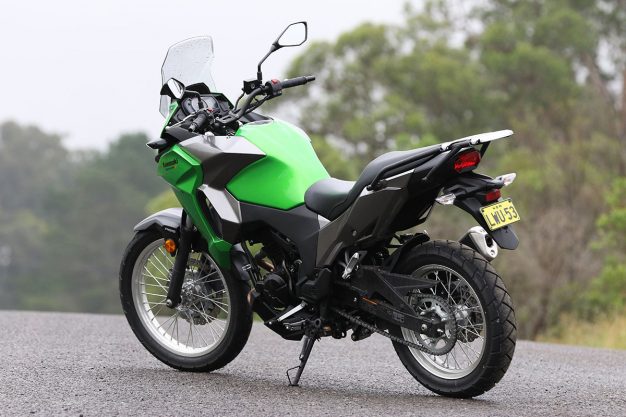 Though it looks ready to head off-road on the most rugged of adventures, Kawasaki maintains that the Versys-X 300 – along with the bigger Versys models – are intended primarily for the tarmac or hard-packed unpaved roads. The wire-spoked wheels, long travel suspension and good ground clearance make for a comfortable and confidence-inspiring machine on gnarly or fast dirt roads, but when the roads turn to trails, tightening up with more serious obstacles, the Versys-X 300 doesn’t have the clearance or throttle response you need and something a trail bike like Kawasaki’s KLX250S delivers.

The all-new backbone frame was designed to handle the Versys-X’s improved off-road capability with a stronger mount around the rear shock and is sturdier in the sub-frame to carry a pillion and luggage. The long travel suspension errs on the side of softness in its overall balance, but at the same time is very well controlled across bumpy roads or in hard braking situations. The front-end has a sturdy set of 41mm forks and at the rear the monoshock has pre-load adjustment to counter additional loads that the Versys-X 300 is intended to carry. 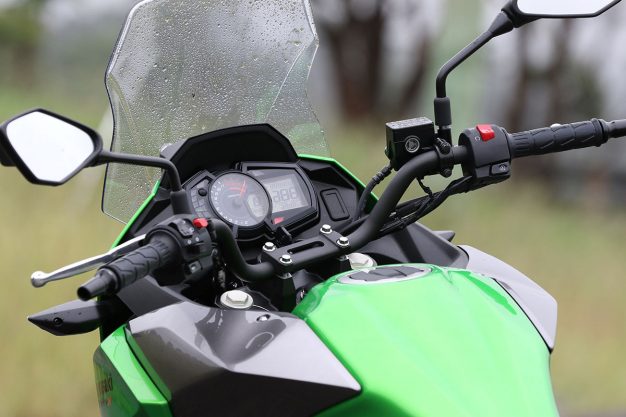 Rolling on a 19-inch front and 17-inch rear wheel sizes, the geometry is confidence inspiring off-road whilst not at the expense of good handling on the tarmac. It is stable at speed and nimble at low speeds with a big turning circle to make manoeuvring a cinch. It also has a very narrow and relatively short seating position as well as a light weight and low centre of gravity making for a package that isn’t intimidating to ride for shorter riders despite the X-300’s big bike looks. ABS is standard fitment and the 290mm front and 220mm rear brakes offer all the power needed to stop with pinpoint accuracy.

One aspect of the Versys-X 300 where it stands alone in the small-capacity learner bike market is in just how many accessories there are available to improve the long distance touring potential of the machine. There is an array of top box and pannier options while steel engine guards, sump guard, hand guards, auxiliary LED lights, DC outlet and centre stand are all available through the Kawasaki dealer network. It might all sound like a bit much gear to throw on a 300cc dual-sport, but the Versys-X 300 will carry it all well and, best of all, provide a great point of entry to the world of adventure touring. 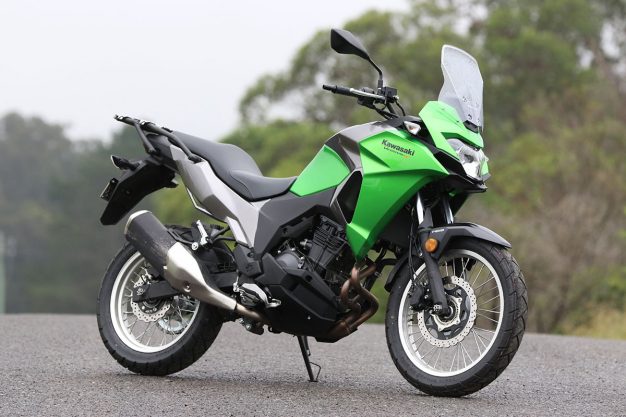 Priced at $6399, there is no arguing about the value for money that the Versys-X 300 delivers. It probably won’t be a bike that riders – once their skills have developed – will hang on to as a machine to explore Australia on, but as far as a way of introducing riders to the world of adventure touring it’s a hard machine to go past. Great style, competent engine, dedicated handling and great versatility. In many ways, the Versys-X 300 is the machine that is more versatile and does it all better than the other Versys in the range.