KTM’s Super Duke GT is an adrenaline seeking sports touring missile engineered around one of the most exciting powerplants currently on the market. The model was new for 2016 and uses the same 1301cc 75-degree V-twin platform that graces the marque’s class leading naked bike, the 1290 Super Duke R.

There’s also a suite of tech savvy features like electronic suspension and ride by wire throttle that equip this beast of burden for touring, along with some genuinely useful long haul hardware like pannier brackets and a 23-litre fuel tank.

The seat feels higher than its 835 millimetres mostly because of the narrow profile of the bike, but once mounted the upright riding position gives a supreme sense of control. The Super Duke GT will see at least 300 kilometres under typical riding conditions before needed to refuel, and the comfortable ergonomics go a long way to ensuring that extended trips in the saddle seem easy. 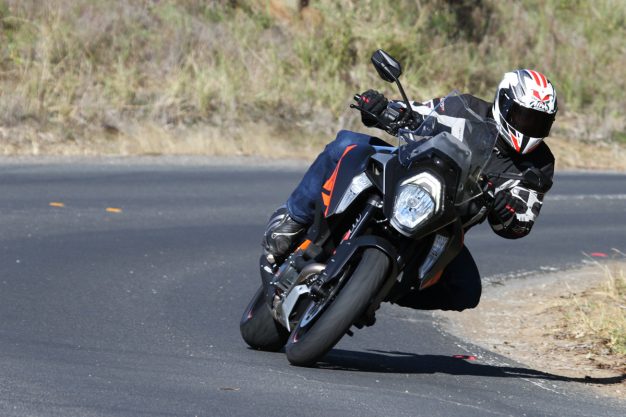 White Power (WP) semi-active suspension allows the rider to select modes which adjust both the damping and pre-load settings of the front fork and rear shock. There are three levels of suspension damping settings intuitively packaged up under the titles of Sport, Street and Comfort, with each being noticeably distinct from the others in terms of the ride quality.

The compression and rebound adjustment can be paired with a selection of rear pre-load settings that range from riding one up or two up, with or without luggage. The latter can also be used as a proxy for increasing rear shock stiffness if you feel the need to track tighter lines through the twistys where this sports touring weapon really comes into its own.

The simple but practical controls on the left switch block are refreshingly simple to use, but there is a huge amount of information that can be toggled through on the dash so it does take a little time to work out how to find what you’re looking for. Everything from fuel range/consumption to tyre pressure, time, trip meters, average speed, heated grip settings, and engine temperature can be found on the dual liquid crystal displays, in addition to the engine modes/traction control and suspension settings.

A standout feature was the heated hand grips, which have three levels of adjustability and received a thorough testing during our early morning winter ride through the Blue Mountains. They did a sensational job of thawing out frozen digits and are a welcome feature that wills you to stay in the saddle regardless of the ambient temperature. 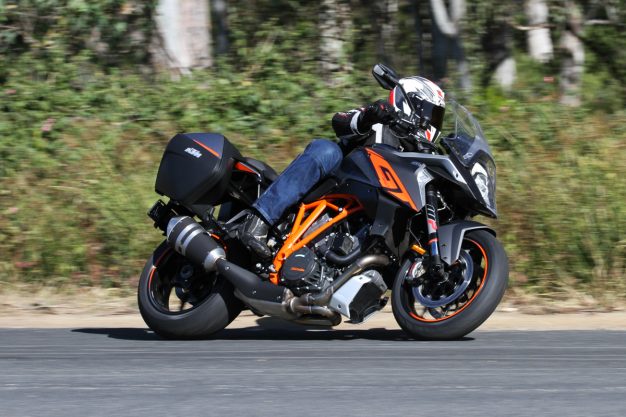 In addition to these on board creature comforts, the ride by wire throttle provides three selectable engine modes to choose from – Sport, Street and Rain – each with their unique traction control settings (MTC). The MTC can also be switched to off when you want to glean maximum enjoyment from the torque biased motor and this will allow the front wheel to loft easily in the first three gears.

Sport mode delivers razor sharp and aggressive response at the throttle with minimal slip, which is great for riding fast or hamming it up with your mates on twisty back roads. Street mode still delivers the full quota of 144Nm at 6750rpm and 127 kW at 9500rpm, but presents as a sweet alternative when you want to relax a bit, or commute through urban environs.

Rain mode slashes the overall power output and intervenes rapidly when the system senses any rear wheel slip and therefore provides a valuable safety net for slick conditions. There’s also an option to programme the ECU with KTM’s Motor Slip Regulation (MSR) which applies a small amount of engine revs to mitigate any chance of rear wheel lock up while downshifting or chopping the throttle. All of these systems work in tandem with the Bosch Inertial Measurement Unit (IMU), which monitors the bike’s position in space on five different axes to better improve the efficacy of MTC, MSR and ABS.

The braking package is spearheaded by powerful radial mount Brembo monoblocs that are equipped with combined ABS to draw upon stopping power from the front and rear in emergency situations. These calipers clamp down on twin 320mm floaters with excellent bite, and you can also select Supermoto mode from the dash menu to disable rear ABS, or even switch the system off entirely if desired. Hill Hold Control (HHC) is a new optional extra that prevents the bike from rolling back on an incline, but this wasn’t available to test on our model. 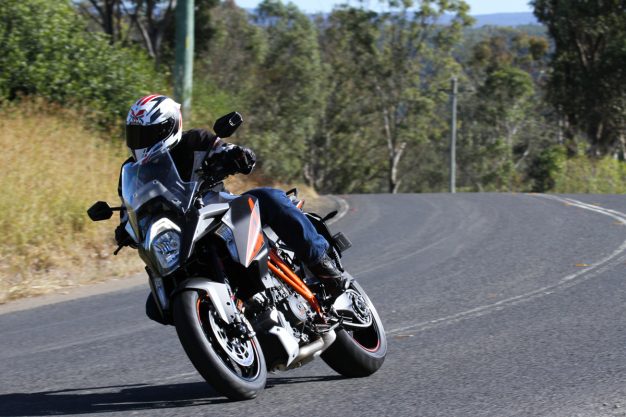 For navigation at night the Super Duke GT benefits from LED cornering headlight that gradually lights up when the IMU senses particular angles of lean, and there’s also automatic turn indicator reset which is a new addition this year. The quickshifter supplied standard is a usually a fantastic piece of kit and I really enjoyed it on last year’s model, but unfortunately a glitch on our test model meant it wasn’t working during our ride.

Unfortunately the cruise control system doesn’t quite live up to expectations as it’s both difficult to operate and considerably larger than other units on the market, but hopefully it will be one of the first things on KTM’s list when it comes time to make revisions as this is a vital ingredient given the design brief.

My main issue with the cruise control stems from its position on the right hand switch block, however it is also slow to react when making adjustments to the travelling speed on the move. The screen can be moved manually into several different positions via a bracket and plug system, but all the options are relatively close to one another and it still sits quite low for a touring bike. 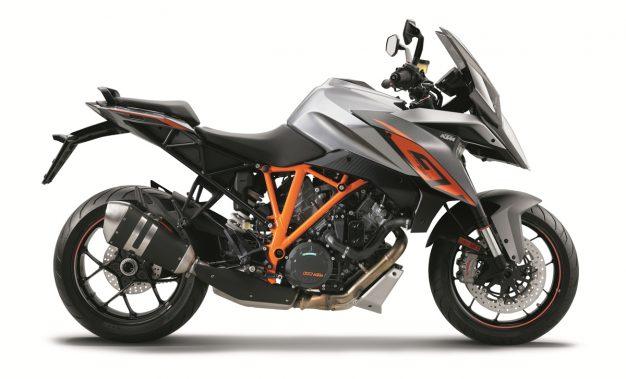 I’m not a huge fan of the bulky front fairing but the half dozen vertical red LED lines comprising the tail light are right on the money. The single sided swing arm is also a beautiful design feature to behold, and the bolt patterns on the rear sprocket and wheel hub really add to this bike’s punk rock feel.

As an adrenaline sports tourer, the 1290 Super Duke GT has plenty going for it, but in my opinion there’s still a few refinements on this model that are needed to bring it up to the measure of its stiff European competition. The $26,995 (+ORC) price tag is a tough pill to swallow but those who love all things orange will see the benefits of owning such a unique and exhilarating motorcycle. 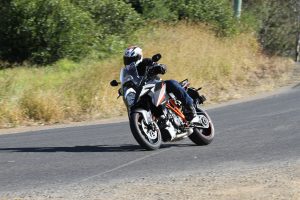 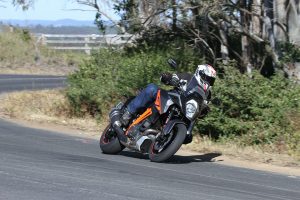 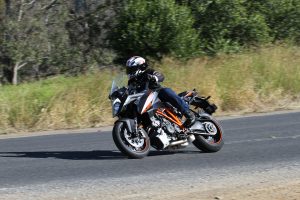 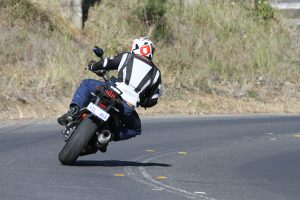 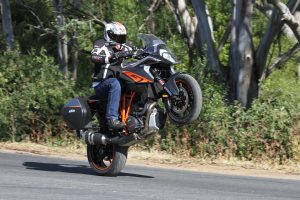 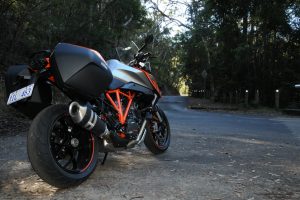 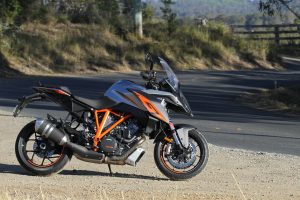 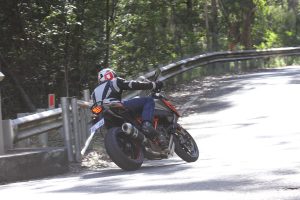 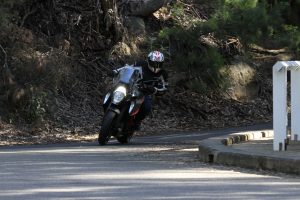