Back in 2006, Yamaha released a heavily-revised and incredibly advanced version of its YZF-R6. It proved to be cutting edge for the era and with further minor changes for the 2008 season, it became the bike to be on. Since that time though, development has stood still and, apart from paint, racers and customers alike have been buying the same machine.

You could argue that Yamaha didn’t need to implement change because the base of the bike was so good it went on to win multiple national and three world championships. The truth though, is it was becoming aesthetically tired and long in the tooth – Yamaha had to do something.

Out of the blue and with Supersport class uncertainty in the air, the updated new 2017 Yamaha YZF-R6 first appeared on Australian soil at last year’s Moto Expo in Melbourne and then again at Phillip Island’s round of the Superbike World Championship in February, where it was also debuted in World Supersport with GRT Yamaha’s Lucas Mahias and Federico Caricasulo. 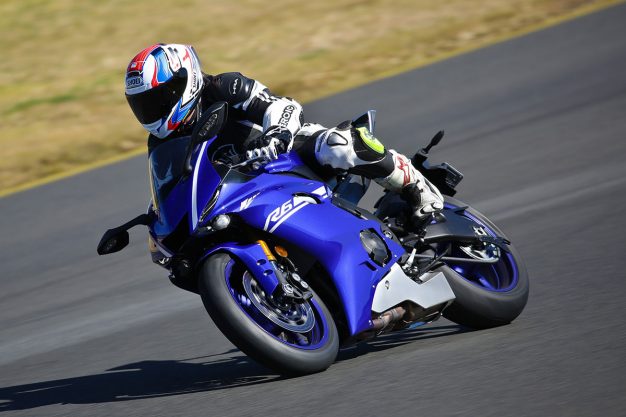 It was only a static bike sitting on the Yamaha stand, but boy was it sharp. Thankfully, this new R6 is heavily modified from the previous version and although the DNA and basics remain the same, it’s different enough to create a raft of interest.

The new 2017 R6 still retains the same liquid-cooled, forward-inclined parallel four-cylinder, DOHC, four valves per cylinder 599cc that’s served it well since 2006. That engine was well ahead of the curve when it was introduced and, even by today’s standards, is the equal of the competition.

I think Yamaha have been smart using the proven product because not only is it fast and smooth, it’s got proven reliability. The close ratio gearbox remains, as does the functional slipper-clutch, and thankfully that package slips perfectly into the same alloy Deltabox concept frame straight off the 2008 model.

Although the frame’s not new, its technology and build quality make it one of the best in the business, being developed straight from the factory’s racing involvement. The unique attribute of having the head-stock, swing-arm pivot and rear axle all on the same plane really works, as can be attested to the crazy lap times it has been able to achieve on different race tracks around the world. It’s renowned as one of the best handlers in the business, so no need to change that.

The similarities stop there though, with the rest of the bike bristling with new bits and pieces. Its striking new styling package is certainly an eye-catcher and the designers have followed closely the lines of the all-conquering M1 MotoGP machine, as well as its close relative, the R1.

Its new looks aren’t just for show though, with a massive eight percent aerodynamic improvement over the old bike, making it the slipperiest Yamaha R6 yet. A new lightweight alloy tank mated to an even narrower (20mm) magnesium seat frame give the bike a new roomier feel once sitting on-board. That extra space allows the pilot to tuck in even further, helping the aero package and protecting the rider more than ever before.

Yamaha has got serious with the suspension, fitting the 43mm Kayaba front forks straight from the R1, with revised settings. These forks give the R6 an even more sure-footed feeling than the already solid older model and a larger diameter front axle helps tie the package together. The KYB shock is also lighter and R1-inspired, with modified settings lifting the standard of the ride quality up a notch. 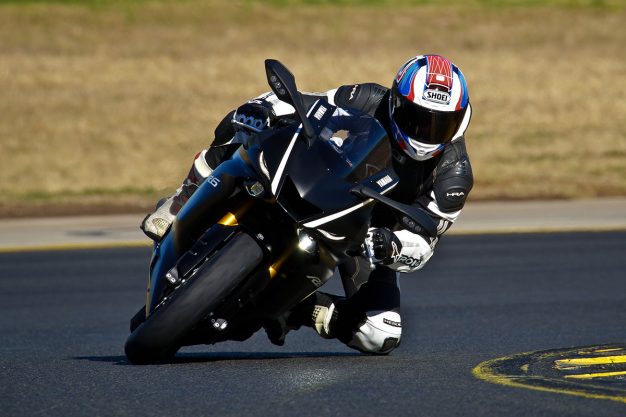 The brakes are straight off the R1 and, when combined to the up-sized 320mm discs up front, this screamer has some of the strongest stoppers in the class. The front brake lever action is firm and solid, giving good feel, especially when you get on the track and need to use the full stopping force in anger.

The good news for the safety conscious among us is that the new braking system features ABS and it works a treat. You can’t turn it off without a special racing-only dongle, but I found that it worked that well that leaving it active – even on the track – is a real option for everyone, except the fastest riders in the country.

Along with the ABS, the addition of six traction control maps and three throttle curve maps are a welcome addition to the package. Standard there is also the Yamaha Quick Shift System (QSS), as fitted to many of their high-end models now. This QSS lets the rider make clutch-less shifts through the close ratio gearbox, while keeping the throttle to the stop and it gives the R6 a very racy feel. 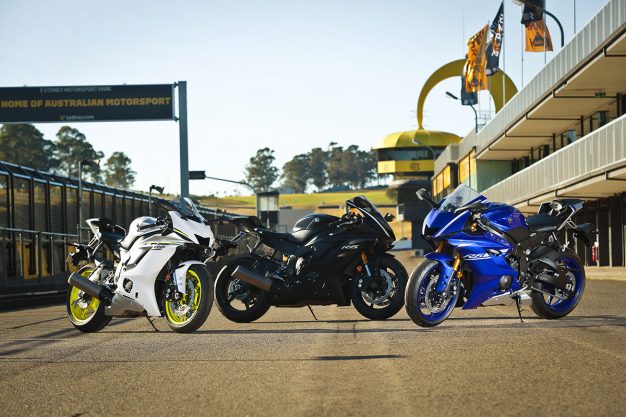 We were supposed to ride the bike up the Putty Road and back, plus complete half a day on the track, but the road session turned into a puddle-fest thanks to one of Sydney’s infamous downpours. Riding the freeway in atrocious weather did however give me a real opportunity to test the highest traction and softest throttle map in its perfect environment. The safety of both systems could be felt instantly and turned what was going to be a fearful ride in to one of confidence.

It wasn’t long before we held up the white flag and headed back for a night’s rest and the main event, half a day at Sydney Motorsports Park. Thankfully the rain disappeared and the sun shone brightly for the following day on track. I was really looking forward to seeing how far the R6 had come since the last time I raced one in the WorldSSP championship during 2007.

Heading out of pit-lane, a smile instantly appeared on my face, I twisted the throttle and a sleek, smooth power transmitted to the ground – a familiar feeling I remembered from my time on the race bike. Its delivery, although nowhere near as powerful as the R1, was so much easier to control, making me understand why these 600s were once one of the highest-selling bikes on the market.

There is a lightness attached to the handling of the bike that’s evident from the start. Even though the 2017 is slightly heavier than the old one (due to Euro4 compliance and fitment of ABS), it’s lost none of its agility. I literally only had to think for the bike to hit the part of the track that I was aiming for and I was there. 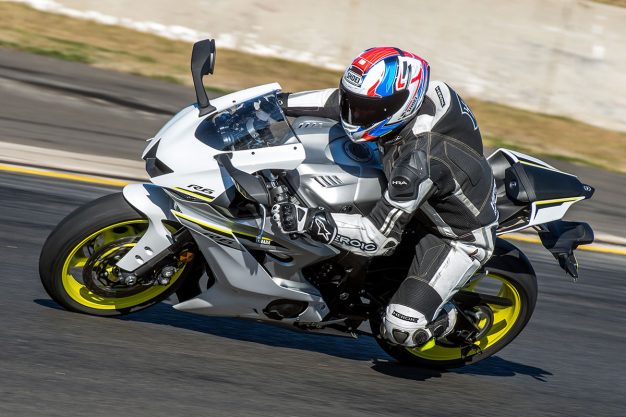 The standard settings are too soft for the track though and it wasn’t long before the front started moving around, because the back was sagging too much. I upped the rear pre-load a couple of turns and instantly the R6 responded with that perfect handling again, just at a faster pace.

This R6’s strong point is the way it let me keep my corner speed up and rail through the turns. It’s very satisfying to ride, rewarding the lucky owner with a normally un-found speed. I guess that’s the key right there, the fact that it’s an easy bike to ride fast and, even though it likes lots of revs, it doesn’t feel like it wants to bite you, rather become your best friend.

All bikes have their flaws, but there’s not much to pick on such an accomplished machine – it’s got the proven performance with an updated look. I guess I would have liked to see Yamaha update the instrument cluster to the R1 styled TFT version and perhaps a grippier seat, but don’t let that put you off because one of the best just got better.

Yamaha has had a lot of success in the Supersport class over the years and this is a refreshing update that will excite enthusiasts of the class and potentially introduce more to it, considering the strengths of the R15 and R3 models below it. The 2017 Yamaha YZF-R6 is most definitely a bike that deserves attention and would make for a mega track bike as well. 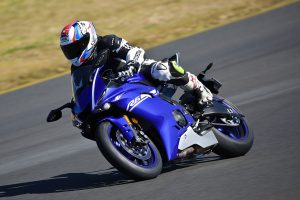 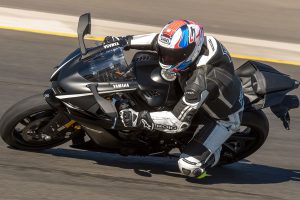 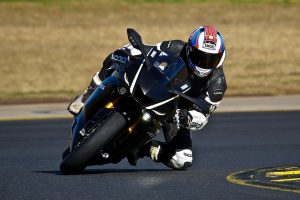 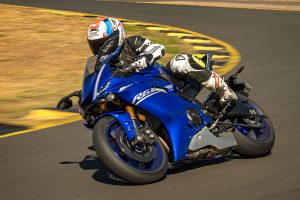 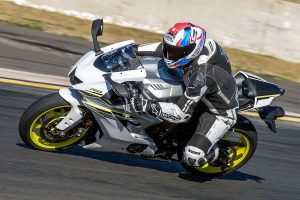 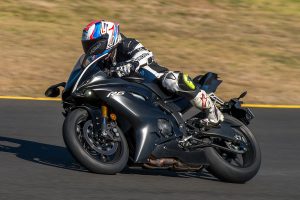 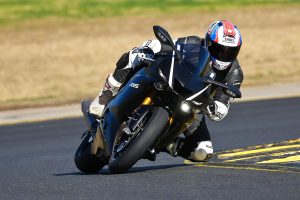 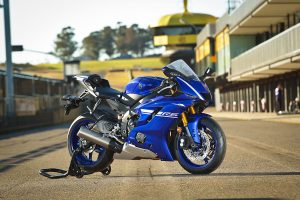 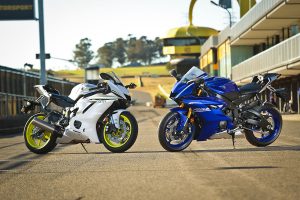 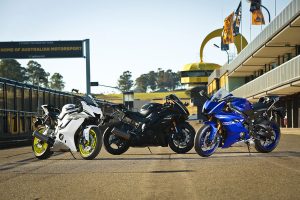 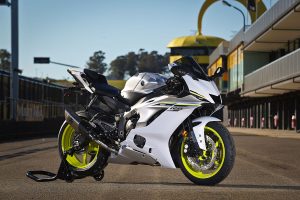 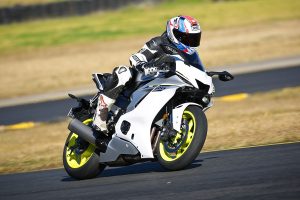