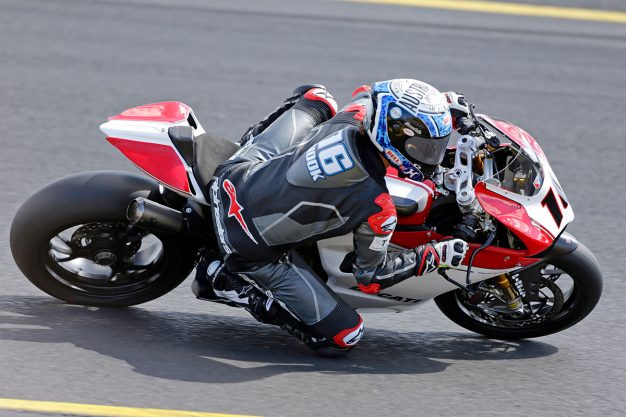 Motul Supersport race one:
The first Supersport race of the weekend marked a spectacular return to national competition for Yamaha-mounted Aaron Morris, trailing Mark Chiodo (Triumph) for the first six laps before taking charge and sprinting off to a 4.335s victory at the conclusion of 12 laps. Crossing the line second on track and directly behind Morris was actually Tom Toparis (Kawasaki), however a 10-second jump start penalty dropped him down the order to fifth. That bumped early leader Chiodo up to second, with Mason Coote (Yamaha) and Sam Condon (Yamaha) also capitalising in positions four and five. Championship leader Ted Collins (Suzuki) rode a composed and lonely race for P6, taking one step closer to clinching the 2017 title. The top 10 was filled by Chris Quinn (Yamaha), Jordan Carlsson (Yamaha), Jake Pruiti (Kawasaki) and Nic Liminton (Yamaha). Local Sam Muldoon (Kawasaki) was well in contention until he crashed out of fourth at turn eight in dramatic fashion just prior to the midway point.

Yamaha Motor Insurance Superbike race one:
It was a dominant performance from Team Suzuki Ecstar’s Josh Waters in the opening affair, taking off from the pole position and asserting himself as the man to beat from the outset. He powered to a new lap record of 1m29.941s on lap two and an early mechanical from Bryan Staring (Crankt Protein Honda Racing) while running second at the time assisted Waters in edging away to an eventual 2.660s victory. From that point and with Waters comfortably out front, it came down to who would finish second, as a determined Troy Herfoss (Crankt Protein Honda Racing) eventually claimed the position – narrowing the championship difference down to three points as a result. Behind him was series leader Wayne Maxwell (Yamaha Racing Team), who in turn fended off a racy Josh Hook (McMartin Racing Ducati) after a late challenge for third, with Glenn Allerton (Yamaha Racing Team) also in the mix for P5. The distant top 10 was completed by Daniel Falzon (Caterpillar JD Racing Yamaha), Cru Halliday (IPONE/YMF/YMI Yamaha), Robbie Bugden (Kawasaki BCperformance), Michael Blair (Blair Build/Gosford Classic Car Museum Yamaha) and Corey Turner (DesmoSport Ducati).

Motul Supersport race two:
Repsol GAS Racing Triumph’s Chiodo surged to the second race victory in Supersport this afternoon in commanding fashion, victorious by 4.813s ahead of Muldoon and Coote. That pair took full advantage of a clash between Toparis and Morris on lap nine of the 12 at turn two, while Quinn and Collins crept into the top five by race’s end. More importantly, fifth for Collins was enough for Next Gen Motorsports standout Collins to clinch his first Australian Supersport Championship crown aboard the GSX-R600 with a round to spare. Meanwhile, the top 10 placings included Condon, Carlsson, Liminton, Thomas Bryden (Yamaha) and New Zealander Simon Rees (Honda). Overall for the round Chiodo took the win, joined on the rostrum by Coote and Condon, as in the championship standings it’s now Collins a full 63 points ahead of Coote, with Toparis a further 28 points behind in third.

Yamaha Motor Insurance Superbike race two:
A perfect weekend consisting of pole position and two race wins has lifted former two-time champion Waters into title contention with one round remaining, now six points outside of new championship leader Herfoss. The second race in Sydney was another thriller, although that was for third as Waters inched away to a 1.361s win ahead of Staring, who maintained pressure for the duration but couldn’t quite challenge for the victory. The battle for the final race podium ultimately saw Herfoss take the position and important points after overcoming a hard-charging Allerton and fast-finishing Bugden. Halliday was also well in the mix this time around for sixth, as an impressive Blair, Turner, Hook – who had a jump start penalty after initially crossing the line fifth – and Alex Phillis (Apex Civil/Helicraft Racing Yamaha) were the top 10. Falzon crashed out of the fight for the top five at turn five on lap 12 of 14. Overall for the weekend Waters was the victor, from Herfoss and a resurgent Allerton. In the standings Herfoss will lead into Phillip Island’s finale by six points over Waters, with Maxwell another nine points in arrears in third.