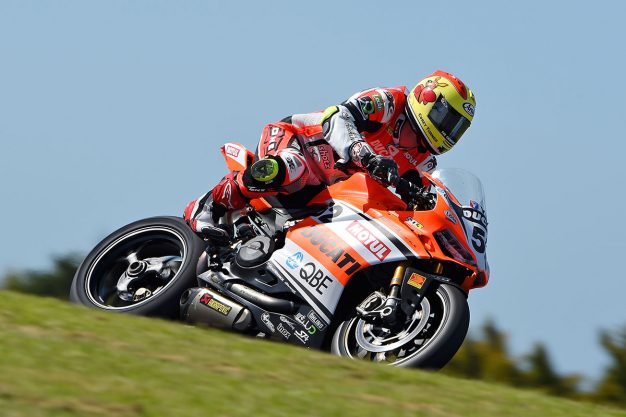 Motul Supersport race one:
The opening Supersport race of the weekend was all pole-setter Mark Chiodo (Repsol GAS Racing Triumph) at the front of the field, taking charge on lap two and going on to win by 4.316s. Chiodo won ahead of early leader Tom Toparis (Cube Racing Kawasaki) and experienced local Ryan Taylor (Yamaha), who was a full 18 seconds from victory to round out the podium in the opening 10-lap affair. With Sam Condon (Yamaha) and Rhys Belling (Yamaha) completing the top five, disaster struck series podium challenger Mason Coote (Yamaha) when he exited just past the halfway point following a crash at turn 11, bringing him within striking distance of Toparis for P2 in the standings. The top 10 also featured Mitch Rees (Honda) in sixth from the ever-improving Aidan Hayes (Cube Racing Kawasaki), Jordan Carlsson (Yamaha), Chris Quinn (Yamaha) and Cambridge Olivier (Yamaha).

Yamaha Motorcycle Insurance Superbike race one:
Team Suzuki Ecstar’s Josh Waters has taken a vital victory in the opening 12-lap Superbike encounter at Phillip Island, taking charge of the championship to carry a 13-point lead into this afternoon’s title-deciding affair. Rain falling pre-race soon turned to sunshine and a relatively high wind quickly dried the track surface, making for a dry race and straightforward strategy for the teams. Waters pulled a 1.2s on the opening lap and from that point he was in control for the duration, eventually crossing the line 3.759s ahead of Wayne Maxwell (Yamaha Racing Team), who has climbed his way into P2 behind Waters in the points after Crankt Protein Honda Racing’s Troy Herfoss entered the pits with two laps remaining after running toward the rear of the top 10. The defending champion’s now 19 points outside of the lead as a result. Second of the Yamahas Glenn Allerton fought hard for third, edging Daniel Falzon (Caterpillar JD Racing Yamaha) for position as Josh Hook (McMartin Racing Ducati) filled the top five. It was a tight scrap for sixth between Bryan Staring (Crankt Protein Honda Racing) and Cru Halliday (IPONE/YMF/YMI Yamaha) – finishing in that order – while Alex Phillis (Apex Civil/Helicraft Racing Yamaha), Michael Blair (Blair Build/Gosford Classic Car Museum Yamaha) and Robbie Bugden (Kawasaki BCperformance) were the top 10 finishers.

Motul Supersport race two:
Race two of the Supersport ranks was a tighter affair as once again Toparis led the opening lap before Chiodo stormed to the front of the pack. This time though the talented rookie Toparis was able to maintain pressure throughout the 10 laps, but any chance of a late pass was missed when he had a high-speed moment on the final lap. That enabled a flawless Chiodo to go ahead and sweep the weekend, 0.447s ahead of Toparis, while Coote bounced back for P3 to ultimately secure the runner-up result in the standings ahead of Toparis. Coote got the better of Taylor for position four, as Belling, Quinn, Rees, Condon, Calsson and Mick Hefferan (Kawasaki) were the top 10 scorers. Overall for the round Chiodo, Toparis and Taylor made up the podium, while in the standings Ted Collins (Suzuki) – who is on Superbike duties this weekend – was crowned with a round to spare ahead of Coote and Toparis.

Yamaha Motorcycle Insurance Superbike race two:
A thrilling final race of the year saw Maxwell round out the year with a race and round win, but it was Waters who has become a triple ASBK champion after adding the 2017 title to his 2009 and 2012 victories. Dry, warm conditions greeted riders for Superbike race two this afternoon and it was evident that the title was on the line once and for all. Waters led lap one, but a gritty Maxwell worked his way through from P4 at the end of the first lap and took the lead by the end of the second lap. While he edged away at the front to a 0.126s win, Waters had his hands full as he eventually slipped back to fifth, but appeared to be riding in ‘championship mode’ in a bid to wrap up a third-career crown. Across the line behind Maxwell and Herfoss was Staring in a strong showing, marginally ahead of Allerton for third. Next came Waters for the number one plate, as Falzon, Phillis, Matt Walters (Swann Insurance Kawasaki), Blair and Hook completed the race top 10. Maxwell won the round ahead of Waters and Allerton, as the series belonged to Waters by four points over Maxwell and a further 11 in front of Herfoss.