Alongside a host of new models, Honda unveiled its all-new CB1000R at EICMA this week in Milan, Italy, adding the futuristic naked bike to its line-up.

The 2018 CB1000R stands out from the crowd by moving away from the standard super sports-derived big naked formula to create a motorcycle that melds exhilarating function to a form that offers a radically fresh, visually stunning two-wheeled aesthetic. It’s a motorcycle that looks, feels and performs very differently from what’s gone before.

In creating this new identity, Honda’s development engineers have re-assessed the hard-core Sport Naked-Streetfighter underpinnings of the existing CB1000R, elevated its performance parameters and added the unexpected. Steered by retro- industrial minimalism, they have stripped everything back, moved away from ‘RR’ inspiration and instead used a host of textured metal finishes and an ultra-minimalist look under the design theme of ‘Neo Sport Café’. The result is a machine with a unique identity, a fusion of Sport Naked and bare-boned Café Racer inspirations.

Freshly conceived from the wheels-up, the CB1000R has been designed to be exciting to ride – and fully capable of chasing much more focused machinery down on a twisting back road – while instilling an innate pride of ownership. Whichever way it’s approached – aesthetics, emotions, performance, technology – the new CB1000R is a hard motorcycle to ignore. 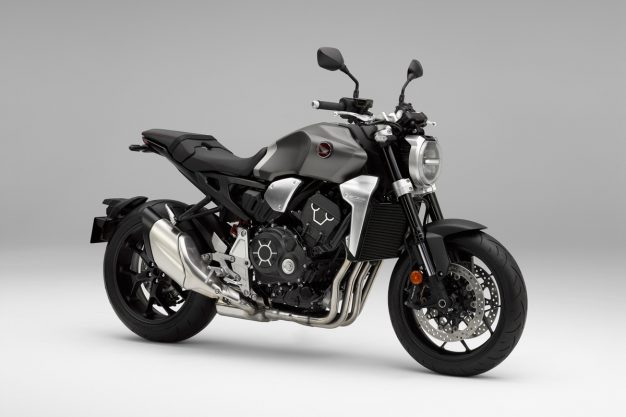 The 2018 CB1000R elegantly combines more with less. It gives its rider a huge amount of usable engine performance, with the control of a cutting edge Supersports machine, while the innovative, minimalist styling injects it with a whole new attitude.

Its four-cylinder engine has been tuned to make 16 percent more peak power at just over 10,000rpm and five percent more torque right through the mid-range, where it’s most useful – and most fun. It is also four percent shorter geared, to extract even faster acceleration from the power-up. In fact through the first three gears, up to 130km/h the CB1000R rides harder than the CBR1000RR. An assist/slipper clutch adds control.

With the increase in output comes Throttle By Wire (TBW) with three preset riding modes plus a User setting. Power (P), Engine Brake (EB) and Honda Selectable Torque Control (HSTC) work together across the presets to offer optimum benefit to the rider dependent on conditions. The exhaust transmits a raw-edged howl as revs rise.

The 2018 CB1000R is 12kg lighter than the outgoing design, making for a 20 percent improvement in power to weight ratio. It’s also smaller, yet has a more relaxed riding position. And supporting the radical new look is a box section mono backbone steel frame, with Showa Separate Function Fr Fork Big Piston (SFF-BP) USD suspension up front and a Showa monoshock at the rear. Radial-mount front brakes, ABS and a 190-section rear tyre complete the chassis’ upgrade. 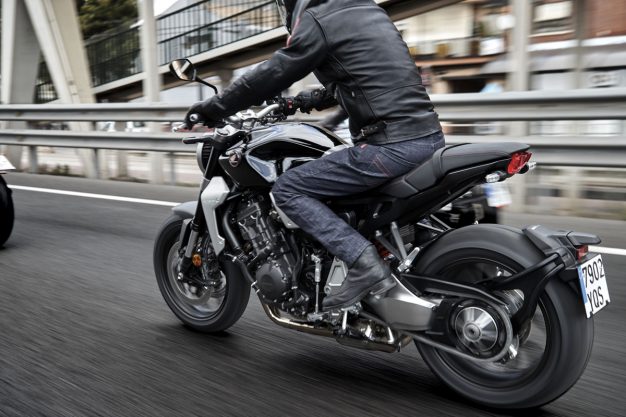 The 2018 CB1000R’s styling takes a bold – and distinct – new direction that deliberately marks it out of the Naked bike mainstream. Every aesthetic detail of the CB1000R has been finessed, and the overall design, its style and powerful stance, merge retro minimalism with the elevated performance package of the engine and chassis.

Its proportions are now much more compact, with a trapezoid silhouette. The overhang of the distinctly-styled round headlight is 90mm shorter and the swingarm-mounted rear numberplate/mudguard unit (a first for Honda) allows for an extremely short, sculpted aluminium tail unit incorporating neat under-slung pillion hand holds.

Conspicuous by its absence is plastic – there are only six exterior parts constructed from that material, the largest being the svelte front mudguard. By contrast, what really makes its presence felt is the use of premium metal finishes throughout the machine, drawing on the long, café racer tradition: parts such as the burnished aluminium radiator shroud and airbox cover, the machined engine cases, cylinder head and sprocket hub, and the lustrously painted flangeless steel fuel tank.

All lighting is LED and the thin round headlight (with its metal-tone painted rim) employs a horseshoe-shaped light ring as well as distinctive two-bar light signature. The rear light is also a semicircular light bar that fills in solid when the brakes are applied. The T-shaped instrument panel – finished in the same metal-tone paint as the headlight rim – integrates into the top yoke, minimising bulk and the ignition switch is positioned at the front of the fuel tank. 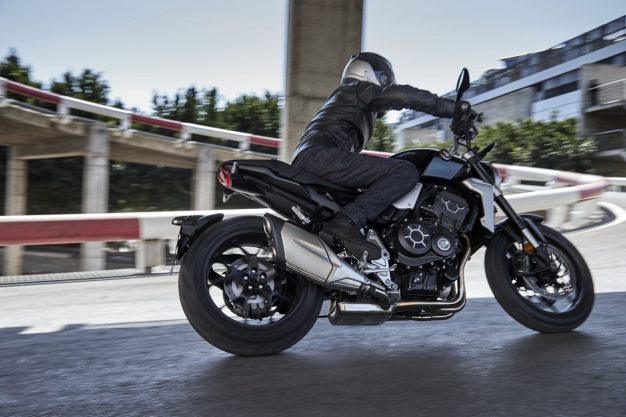 The rider triangle is relaxed, with a ‘natural crouch’ afforded by the 12mm wider tapered aluminium handlebars sited 13mm higher than the previous design, matched to a seat height 5mm taller at 830mm. The flangeless fuel tank too is broad-shouldered but heavily cut-away to allow plenty of knee room.

The adjustable front fork is a Showa Separate Function Fr Fork Big Piston unit (SFF-BP). It contains all the damping function in one leg, reducing weight, while delivering compliance, comfort and control across a broad range of riding conditions. The Showa rear shock adjusts for spring preload, compression and rebound damping. 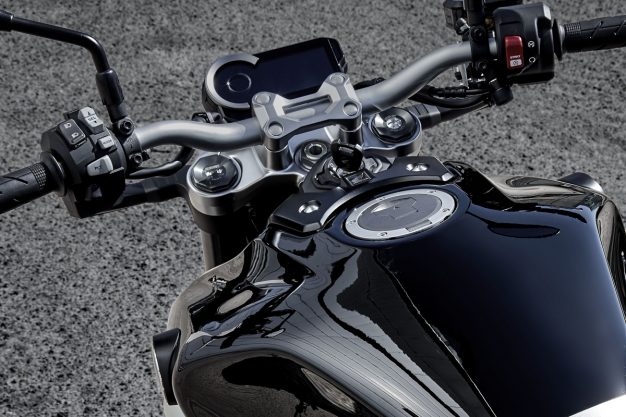 The engine has also been tuned to deliver its torque with strong character especially in the 6-8,000rpm range, where it bulges significantly, generating an exciting and engaging riding experience. It’s also a useful aid for rapid roll-on acceleration in real-world overtaking conditions. The redline begins at 11,500rpm and the rev-limiter cuts in at 12,000rpm.

Development concentrated on improving gas flow into, through and out of the cylinder head. Valve lift is higher with inlet at 8.5mm and exhaust 8.1mm (as opposed to 7.9/7.8mm). A 44mm diameter throttle body (up 8mm) feeds larger diameter inlet ports; the shape of the combustion chambers is also revised. The airbox, ducting and air filter are also brand new and present a much more simplified and smoother route for airflow into the engine, reducing pressure loss all the way from the outer ducts to the throttle body.

Allied to the boost in outright performance numbers is an important four percent reduction in gear ratios, which greatly improves acceleration through the gears between 30-130km/h. The new assist/slipper clutch is lighter at the lever and helps manage hard downshifts. 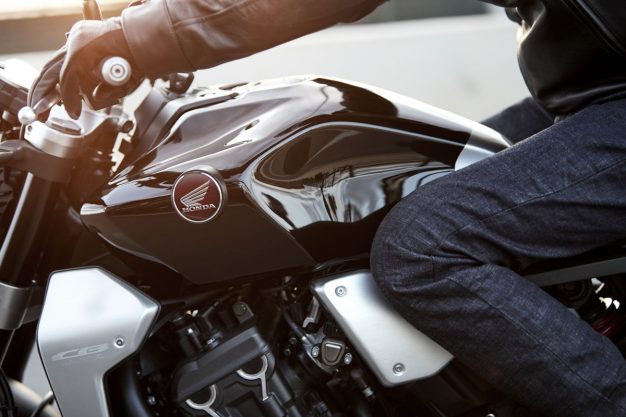 A new exhaust also adds to the CB1000R’s mid-range muscle and weight reduction. It’s a 4-2-1 design, feeding via four short catalysers into a main chamber, which then feeds a dual chamber muffler. A link pipe joins the 2 main pipes just before the catalysers, boosting torque from 5,000rpm up. At 11.2kg it’s 4.5kg lighter. The exhaust note has been tuned internally, meaning that as the revs rise past 5,500rpm it takes on a significantly deeper, more raw tone.

Throttle By Wire (TBW) has also been added. This allows the rider maximum control over what is a powerful engine wrapped in minimalist motorcycle, via 3 preset riding modes plus one User mode (selected from a switch on the left handlebar). 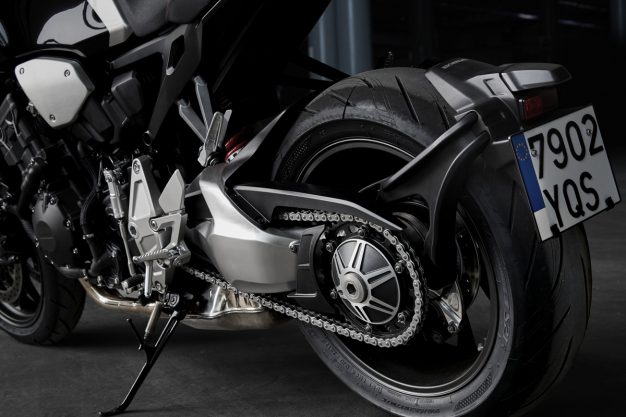 Rain mode employs the lowest Power setting, medium amount of EB and high HSTC. The lower levels of power and torque are focused on the first three gears. Stabdard mode uses the middle setting for Power, HSTC and EB. It knocks a little output out of first and second gear, and uses a power curve that sits just below that of Sport mode, with reduced torque at partial throttle openings. It also allows for small rear wheel slides and the front wheel leaving the ground.

Sport uses high power and lowest levels of EB and HSTC to deliver 100 percent power through all six gears, maximum torque at all throttle positions and minor intervention from HSTC. The User mode allows the rider to choose between the 3 settings for each parameter and save the setting for future use

Other information available to the rider is a shift-up indicator on the top right corner of the dash, which either flashes white with increasing frequency as rpm passes the preset value or goes yellow-amber-pink as a visual guide to change up. Further functionality options in that space are an ECO riding indicator, gear position indicator and riding mode indicator.

Honda Motorcycles Australia is yet to confirm price and availability in the country. For more information and the latest on the release, visit www.hondamotorcycles.com.au.