Inspiration comes in many forms and supermotard-style road bikes have a certain aggressiveness about them that is attention-grabbing and attractive to many. I still remember being in Italy in 2006 and seeing one of the first Ducati Hypermotards parked outside a bar thinking how cool it looked, but until now I had never ridden a bike of that style.

Aprilia is a company steeped in history and their supermotard entry is a good one. The Dorsoduro itself commands respect, being named after one of the sestieri (suburbs) of Venice, a band of land that’s history can be chased back to the 11th century.

We weren’t in Venice, Italy, for the launch of the 2017 Aprilia Dorsoduro 900 though, but instead rather another historical place in Mac Park, South Australia. The tight, twisty track would offer the perfect opportunity to test the nimbleness of the motard-biased machine while being able to push the limit of its handling, engine and reliability. 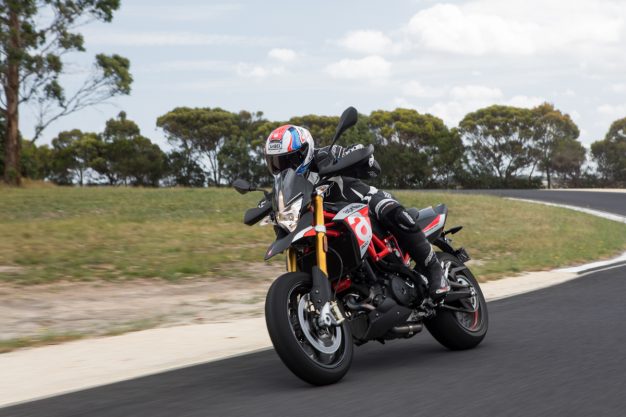 The Dorsoduro has been around in 750cc form for over nine years now and was placed on the market to counter the massive sales its Italian counterpart – Ducati – was achieving, effectively in the new sector it created. The Dorso was turned in to a fire-breathing 1200 version in 2010, based more on the Caponord model than the 750, meaning that the Noale-based company had its bases covered.

This new 900 though is a process of consolidation, with the 1200 being dropped and the 750 being transformed into the 900 by the lengthening of the stroke, giving what Aprilia hopes is the best of both worlds.

One thing that is undeniable is that the Dorsoduro is an attractive-looking work of art with all its curves built in the right places. It just looks right as a concept and this year’s paint job manages to incorporate some of the company’s heritage (Italian tri-colours) and its racing history without being over the top. It’s a bike which one could pull up to a bar and look cool, if not super-cool on. 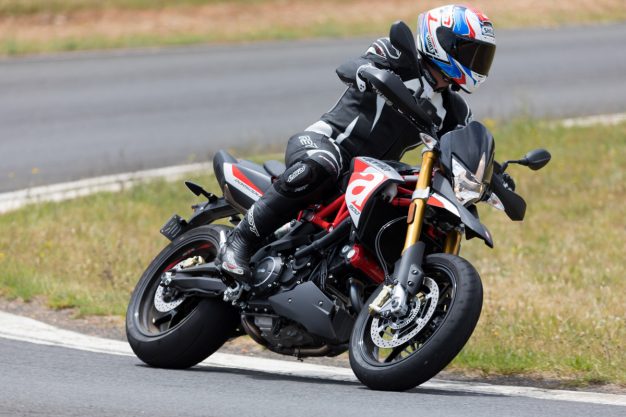 Its L-twin engine design has not only had the stroke increased this year to up the capacity, but it’s also had the reliability improved in a similar way to its sister bike, the Shiver. Cooling and reducing friction have been the main targets, achieved by improving oil flow about the engine, introducing a semi-dry crankcase system and using different coatings on the piston and piston pin.

This year’s 900 also receives a new dedicated Sachs rear shock and a set of Kayaba forks up front to help improve the ride over the outgoing 750. Other changes revolve around the electronic system, with the new 900 using a very special Marelli ECU straight off the RSV4/Tuono range of bikes. This new ECU gives the bike the full monty bag of tricks, making it a very safe bike to ride.

With two-channel ABS, traction control and three different throttle maps to play with, the ECU is kept busy, but with the pedigree of the machines it usually looks after, it’s well in control. And that control is evident in all aspects of the bike, especially when I hit the track for the first time – it put a smile on my face. I rode it standard form with the standard factory settings first off, just to warm up and learn the track. 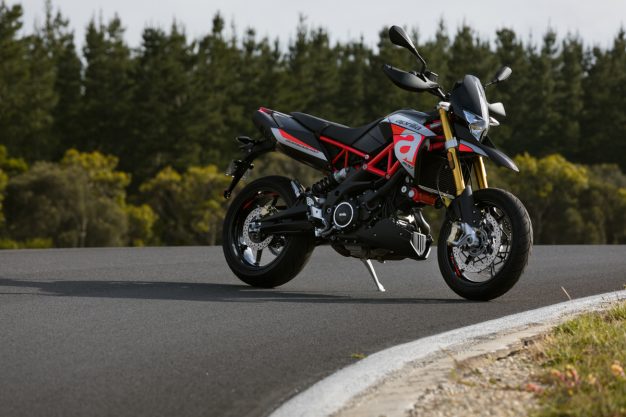 I certainly enjoyed that first outing. The 900 was a lot of fun to ride, but I was running wide, although I decided to stay out in any case and put the electronics through their paces. I started with the traction control doing a couple of laps in each of the three settings. Starting off on the most intrusive setting of map three), I felt a lot of power loss. There was no way it was suitable for the track, but it’d be perfect for slippery, cold morning ride to work.

Map two gave me much more drive, but was still easy to feel out on the track. Map two is ideal in my mind for general riding when conditions are fine, but for the track it was still too intrusive. Map one was much better suited to riding at Mac Park, however to go fast it needs to be turned off. If you were scratching in the hills I would leave it in map one to give the best speed but keep that extra safety dimension.

Coming into the pit, I had one thing on my agenda and that was to sort out the handling. Obviously, the shock with the road settings would have been perfect on the road, but it was just too soft for the track in this environment. I upped the rear spring pre-load three turns, changing the standard 170mm length to a shorter 166mm. This change dramatically improved the steering on-track, while maintaining the rock-solid front-end feel that I had on my first exit. 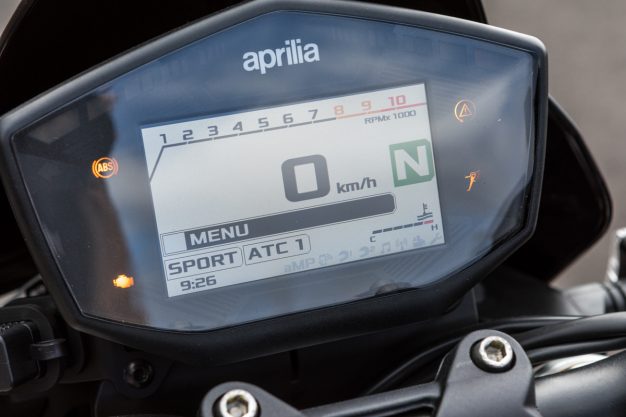 I also took a bit of pre-load off the front, which further helped the bike steer and proved to me what a good all-round package the Dorsoduro is. On the track, it turned out to be a fun bike to ride, but I wish we had got to do a few road miles. I’m sure that it will be a nice road bike too, because it’s got the right stats and the way it handled the rough Mount Gambier circuit gave me confidence.

With nearly 95 horsepower, a TFT dash, good handling, braking and throttle response, Aprilia have created the bike they wanted. It’s not the giant that the 1200 was, but it is gutsier than the 750. In fact, this bike can do a better job than the 750, due to its much better electronics. It does miss that fear-factor that 1200s have when you open the throttle, but if you want to do a wheelie, burnout or muck around, there’s still plenty on tap. With tons of new technology on board this year the Dorsoduro is certainly in the ballpark and a blast to ride. 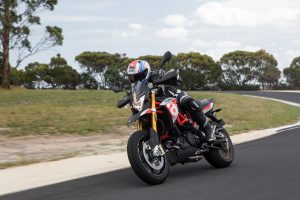 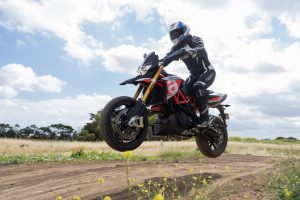 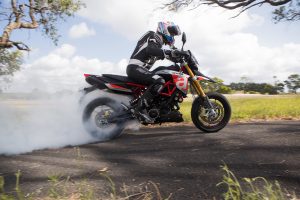 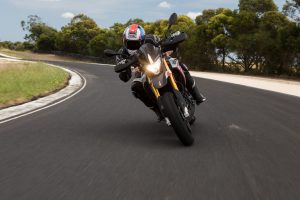 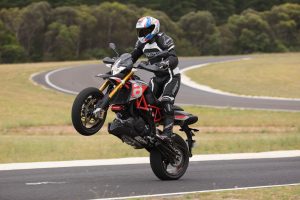 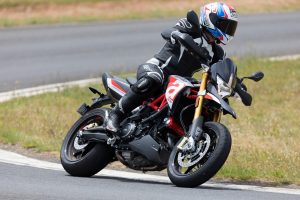 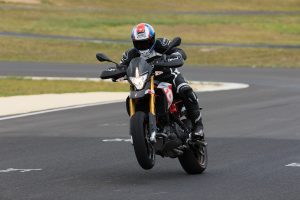 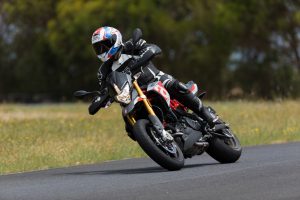 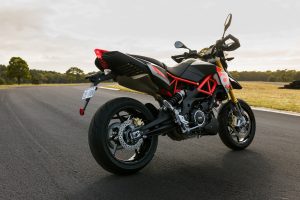 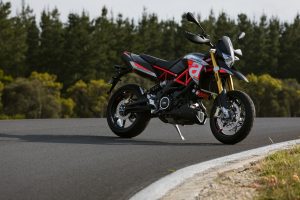 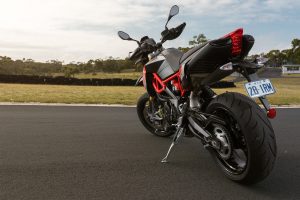 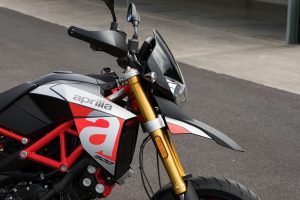 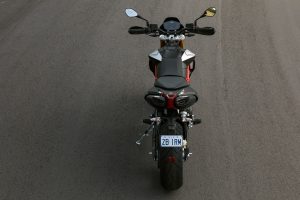 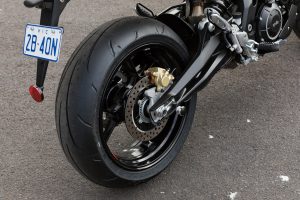 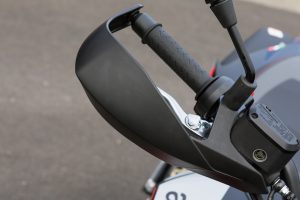 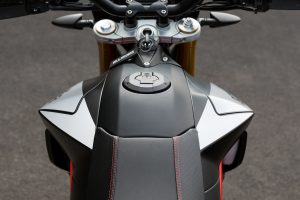 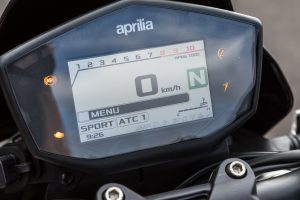 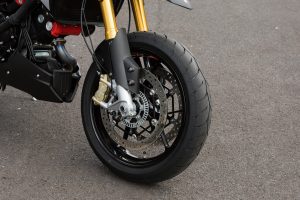 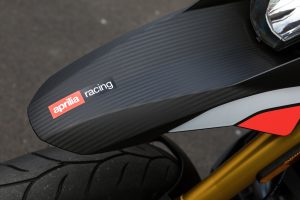 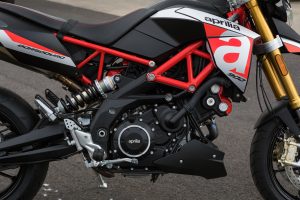 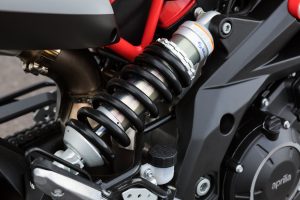